Military veterans back in court today.. 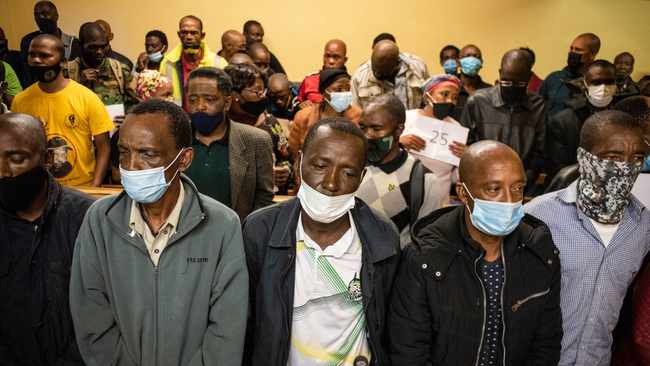 Johannesburg – Eleven military veterans will show up at the Kgosi Mampuru Correctional Service Court for their conventional bail application today.

This is after 42 of the 53 military veterans were captured and conceded bail of R500 each on Tuesday.

The tactical veterans were relied upon to proceed with their bail application.

"The 53 veterans are at present confronting one count of trick to grab and 26 counts of hijacking," said National Prosecuting Authority North Gauteng local representative Lumka Mahanjana.

The matter was deferred to February1, for the 42 veterans that were delivered on bail.

Military vets back in court for bail application after prisoner show

It is affirmed that the veterans informed the priest that they won't participate in any conversation without the presence of President Cyril Ramaphosa or Mabuza.

Mahanjana said Gungubele then, at that point, chosen to suspend the gathering and asked individuals present at the gathering to leave the setting.

"By then it is claimed that a gathering of individuals raged in and shut the doorways of the setting and blockaded the entryways with seats, let the pastoral appointment know that nobody will leave until the president or the appointee president comes to resolve their issues. The 26 agents were saved in the setting for three hours.

"They were subsequently delivered after the SAPS Special Task Force protected them and caught the 53 veterans," Mahanjana said.

The court this week heard that the Protection of Constitutional Democracy Against Terrorist and Related Activities Act 33 of 2004 charge isn't precluded at this point.

Concerning blamed 52, it was uncovered that he had been sentenced for homicide and other timetable 5 criminal accusations, however the guard let the court know that he was given absolution in 1994.

The guard will in any case have to submit the acquittal bargain.

The veterans additionally requested appropriate and unmistakable financial advantages that would change their lives and their families while they likewise requested respectable houses.

Two beaten and burnt in Mahikeng

They were sjamboked and their bodies were set alight