As tensions between Moscow and the West continue to rise over the conflict in Ukraine, a host on Russian state television issued a warning that the country is prepared to fight NATO.

Vladimir Solovyov, a television host, stated on Sunday that Russia is only using 18 percent of its army in Ukraine, and that its military is fighting at "a peacetime size," so that it is ready for "a direct confrontation" with the international military alliance if it becomes necessary. This statement was made on the state-controlled television channel Channel 1, which was broadcast in Russia.

Andrey Gurulyov, a member of the State Duma and a former deputy commander of Russia's southern military district, was also a guest on the show and boasted that Russia's nuclear capability allows it to "liquidate all means of an attack that threaten the territory of Russia." This statement was made by Gurulyov.

In response, Solovyov stated as follows: "That is why it is understood why we are now employing less than 18 percent of our Armed Forces, which is our peacetime army since we are ready for a direct clash with the armed forces of the whole NATO." 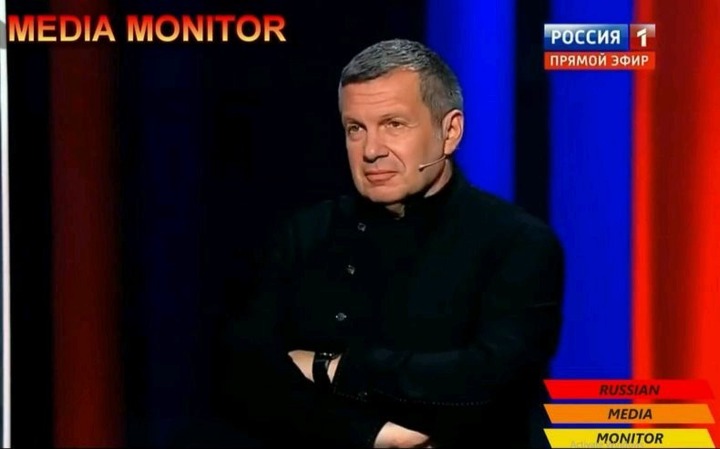 A presenter on a Russian official television channel recently stated that Russia is prepared for a direct clash with the entirety of NATO. This still image was taken from a program that was shown on Channel 1 of the Russian state television station on June 26, 2022.

The two gentlemen were discussing the Suwalki corridor, which is located to the southwest of the border between Poland and Lithuania and is the shortest land route from the Russian mainland to the Russian exclave of Kaliningrad. Both gentlemen were aware of its strategic importance. A potential standoff over the Russian enclave is the most recent development in the conflict that has been going on for five months now. Moscow has issued a vague warning of "retaliation" in response to the restrictions placed on overland cargo headed to Kaliningrad.

Gurulyov made the observation that Russia's needs might be met by the length of the Suwalki corridor.

Everyone was having a disagreement over Lithuania. What type of a route via Suwalki do we require? across to the [Baltic] sea and beyond. It's almost as if they're discussing the distance between the kitchen and the living room: twenty kilometers, forty kilometers, or sixty kilometers...what should it be? To make a corridor where NATO soldiers would be on both sides?" he asked. "To break through for a corridor."

"Not a single conventional service member in the armed forces would agree to do it. We need to make headway in order to create a corridor that runs from St. Petersburg down the coast of the Baltic Sea. He said, "Only then will we have a proper supply line for the city of Kaliningrad."

He stated that Moscow will be required to "thoroughly explain it" in the event that other nations do not see it the same way, without the need to engage Belarus, which is Russia's neighbor and friend.

The discussion between the two men then shifted to the subject of nuclear weapons.

According to Solovyov, political figures in the West were "having heart attacks" when Belarusian President Alexander Lukashenko and his Russian counterpart Vladimir Putin discussed Iskander missile systems and Sukhoi planes in a chat.

Gurulyov stated that the Iskander that would be stationed at the western border of Beralrus would cover "one hundred percent" of Western Europe due to the fact that it has an operational ranger that extends up to 500 kilometers. Nuclear warheads are something that the missile system is capable of carrying.

"Their efficiency output is 90 percent across the board for all of our defense equipment, even the ones that were imported," he stated. "Nine out of ten missiles hit their target, and even if they shoot down the one they missed, it still happens." Regardless of the degree to which the West is trying to provoke us into deploying nuclear weapons, I think that this is a fantastic outcome that should give our adversaries some real food for thought.

"In light of the dangers presented [by nuclear weapons], formulate and carry out the plans, as they become necessary, to eliminate any potential means of attack that may be directed against the territory of Russia. He went on to say that we have the ability to achieve that goal.

As a result of Russia's earlier failures in the struggle to take control of Kiev, the majority of the combat that is taking place right now is concentrated on the eastern area of Donbas. On the other hand, for the first time in the last three weeks, a number of Russian missiles targeted the capital city on Sunday. During the attack on the central district, one person was murdered, and a kindergarten along with other residential structures sustained damage.

On Monday, Ukrainian President Volodymyr Zelensky called on the leaders of the economies that make up the Group of 7 to increase the level of financial and military assistance that they provide for the eastern European nation.