Economic Freedom Fighters Commissar, Mbuyiseni Ndlozi has bid farewell to the EFF fighter Yongama Tatoba who was killed mafia style in Umzimvubu in the Eastern Cape.

Ndlozi says he is one of the EFF leadership attending the memorial service of the slain EFF councillor candidate.

"Attending the Memorial Service of Fighter Yongama Tatoba who was shot dead by assassins on last week. He was a councillor candidate of the EFF in Umzimvubu, Ward 15," said Ndlozi. 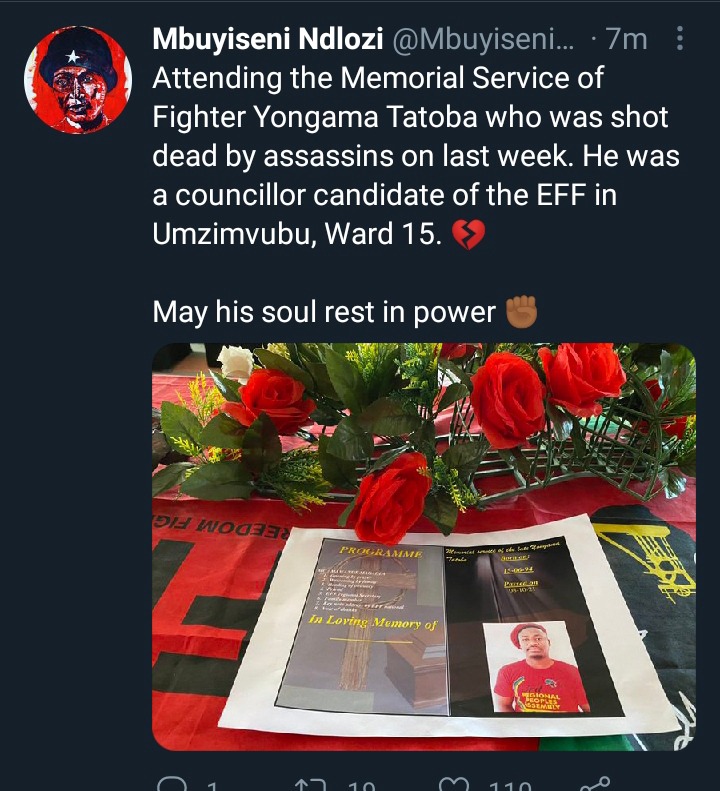 The death of Tatoba comes at a time EFF lost another councillor candidate in what is also believed to be part of political killings.

EFF Umgungundlovu Region Chairperson Mzwakhe Mpulo narrated that, Shangase was shot as he was about to have a meeting with Economic Freedom Fighters agents.

Mpulo said Shangase went to the shop where they were going to meet and that's when a gunman opened fire on him when he was outside after receiving a phone call.

This seems more like a premeditated assassination where the gunman wanted to isolate Shangase so they could kill him.

"We have been told by people who were present at the meeting that he received a phone call and went outside to answer it and that is when he was shot," EFF regional chairperson said.

This is a huge loss for the party. He was such a hard-working person and he was determined to help the people of ward 20. We had hopes that the EFF would take over ward 20 in the upcoming local government elections," he said.