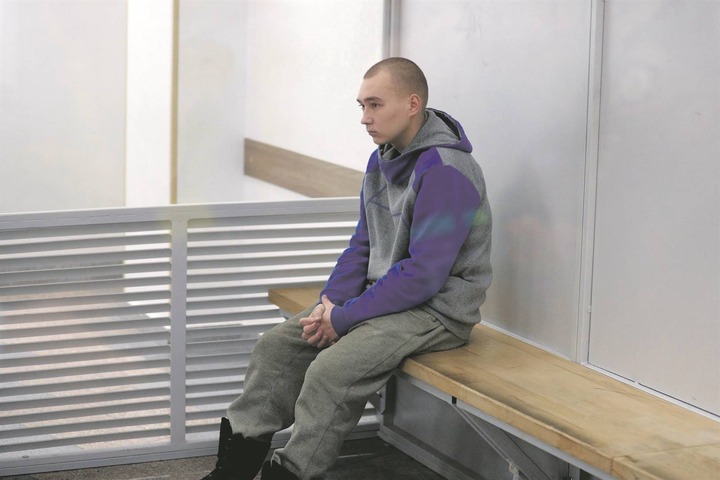 According to the prosecution, a Russian soldier named Vadim Shishimarin was given the order to murder an unarmed civilian in order to prevent the individual from disclosing their position.

In the first war crimes prosecution that resulted from Russia's invasion of Ukraine, a Ukrainian court on Monday, May 23, sentenced a Russian soldier to life in prison for the death of an unarmed civilian. The incident occurred during the invasion.

A tank commander named Vadim Shishimarin, who was 21 years old at the time, pled guilty to murdering Oleksandr Shelipov, who was 62 years old, on February 28, four days after the invasion, in the hamlet of Chupakhivka, located in the northeastern part of Ukraine.

A number of bullets from an automatic weapon were fired at the victim's head, according to Judge Serhiy Agafonov, who said that Shishimarin had been following a "criminal command" given by a soldier with a higher rank.

Shishimarin sat in a reinforced glass box in the courtroom and observed the proceedings in complete silence. She showed no emotion whatsoever when the decision was read out loud. While he listened to the translation, he stood there with his head bent. Viktor Ovsyannikov, Shishmarin's attorney, said that he was not shocked by the sentence since there had been "some pressure from society." He also stated that he will file a court appeal in response to the verdict.

The trial, which only started a week ago, has a great deal of symbolic importance for Ukraine, and one international lawyer told Reuters that it may be the first of many such trials in the future. Ukraine's capital city of Kyiv has leveled accusations of atrocities and cruelty against people committed by Russia during the invasion, and it has said that it has discovered more than 10,000 potential war crimes. Russia has denied targeting civilians or being involved in war crimes while it is conducting what it terms a "special military operation" in Ukraine. This operation is being referred to as the "anti-terrorist operation."

According to statements made by Ukrainian state prosecutors, Shishimarin and four other Russian personnel stole a vehicle in order to flee when the Ukrainian forces struck their column. When the troops arrived in Chupakhivka, they noticed Shelipov riding a bicycle while chatting on his phone. This happened after they had driven into the village.

According to the prosecution, Shishimarin was given the order to assassinate Shelipov in order to prevent him from reporting on their whereabouts.

Shishimarin admitted in court the previous week that he was to responsible for the incident and begged the victim's widow for forgiveness. – REUTERS

Shanghai Reports Zero Covid Cases For The First Time Since The Outbreak.