World at Home On the anniversary of the atomic explosion, the mayor of Nagasaki issues a "crisis" warning. 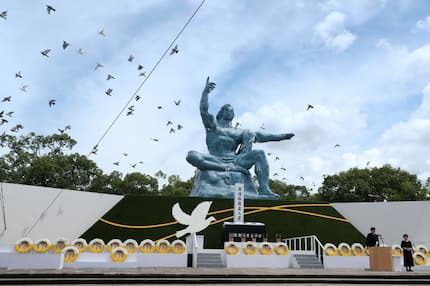 AFP 2022 At the solemn tribute held in Nagasaki's Peace Park, bells rung and doves were released. The mayor of Nagasaki stated on Tuesday, the 77th anniversary of the atomic blast that destroyed the Japanese city, that nuclear weapons offer a "concrete and present crisis" in light of Russia's invasion of Ukraine. Three days after Hiroshima received the first nuclear bomb attack in the history of the planet, on August 9, 1945, Nagasaki was destroyed in a fire that killed 74,000 people. As a result of the American twin attacks, World War II came to a conclusion, and Japan is still the only nation to have experienced an atomic attack during hostilities. However, Mayor Tomihisa Taue issued a warning on Tuesday. "A nuclear war cannot be won and must never be waged," he said, citing a joint statement issued by the leaders of the United States, Russia, the United Kingdom, France, and China in January of this year. UN chief Guterres calls any attack on a nuclear facility "suicidal" "However, Russia attacked Ukraine the very following month. Nuclear weapons have been threatened, which has people all across the world on edge. Save a life by giving right away! Get involved in the blanket drive sponsored by Briefly! A fire that claimed 74,000 lives on August 9, 1945, destroyed Nagasaki. 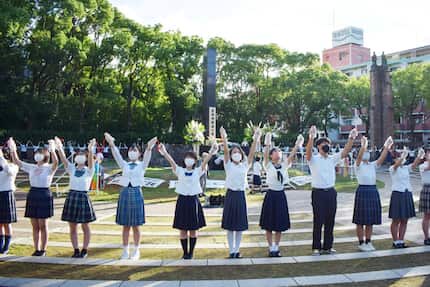 AFP Taue cautioned that the deployment of nuclear weapons could result from erroneous judgments, malfunctions, or in terrorist attacks rather than being a "groundless fear" but rather a "concrete and present crisis." At exactly 11:02 a.m. (0202 GMT), when the bomb was dropped on the port city, survivors, foreign dignitaries, and hundreds of ordinary people joined together to pray in silence. Purified water was offered in a prayer ceremony for the victims who died of burns and other ailments at the somber memorial at Nagasaki's Peace Park, where bells rang out and doves were released. Taue suggested that instead of going to war, people should promote "a 'culture of peace' that fosters trust, respects others, and seeks answers via conversation." More Ukraine grain departs as a new strike targets a nuclear facility On the anniversary of the bombing that claimed over 140,000 lives, including those who died from radiation poisoning following the blast, UN chief Antonio Guterres spoke in Hiroshima on Saturday. Japan has long advocated for a world devoid of nuclear weapons but has not ratified any treaties banning them. AFP As situations with the potential for a nuclear catastrophe multiply on a global scale, he said that "humanity is toying with a loaded pistol." In a statement read aloud in Japanese during the ceremony on Tuesday, Guterres said, "In these times of high tensions and poor levels of trust, we should draw on the lessons of Nagasaki. Japan has long advocated for a world free of nuclear weapons, but it has not ratified the nuclear weapons ban treaty, which will go into effect in 2021. Instead, Japan says it will work to close the gap between nuclear powers that did not sign the treaty and non-nuclear nations.