Explosions that occurred overnight near military posts in heavily Russian-held regions of Ukraine and in Russia itself shook VLADIMIR PUTIN, demonstrating Kyiv's increasing capacity to cause havoc away from the front lines.

Explosions were reported close to an air base at Belbek, on the southwest coast close to Sevastopol, the command center of Russia's Black Sea Fleet, in Crimea, the peninsula that Russia invaded and annexed in 2014. The sky was also lit up in Kerch, which is close to a large bridge to Russia, where Putin's forces claimed that fire from its air defenses was lighting up the night sky.

Two Russian towns were evacuated following explosions at a munitions dump in the province of Belgorod, which is close to the Ukrainian border but more than 60 miles away from the area under Ukrainian control.

By delaying public comment on occurrences in Crimea or inside Russia while implying that it was behind them, utilizing long-range weaponry or sabotage, Kyiv has created an ambiguous environment around such explosions.

There were no casualties recorded in Belgorod or Crimea, according to Russian officials.

They acknowledged that they had ordered the evacuation of two communities in Belgorod while they were looking into the origin of a fire and claimed to have shot down drones in Belbek and Kerch. 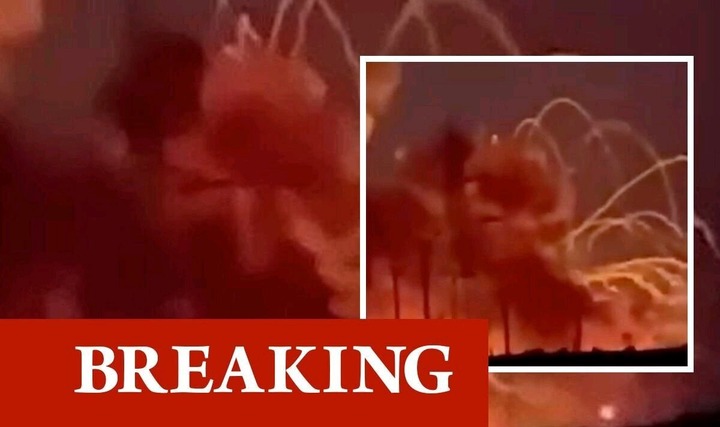 Carl Bildt, a former Swedish prime minister, released a video of massive flames and smoke in the night.

Apparently taken from the Russian facility in Belbek, former Swedish prime minister Carl Bildt released a video of massive flames and smoke in the night sky with the caption, "It surely looks ugly - or wonderful - depends on the perspective."