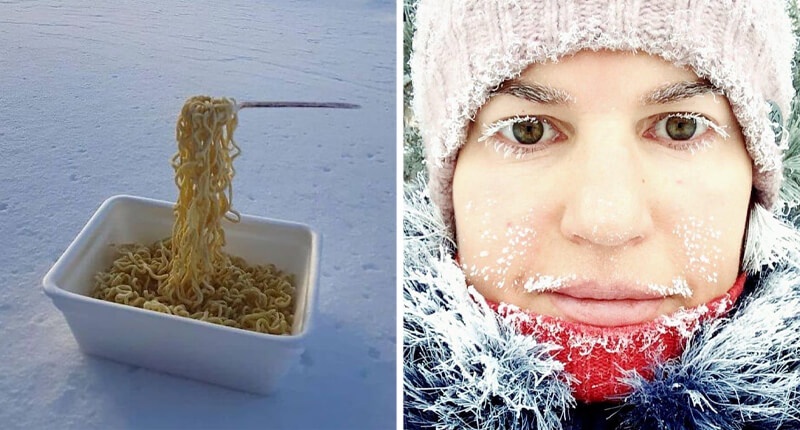 When we think of Russia, we think of heavy coats, fur hats, and freezing our behinds off. During the long winter months, Russia becomes one giant icicle, and the whole country has to deal with insanely freezing temperatures. However, people have adapted and are making the most of these brutal winters. From polar plunges to weird weather phenomena, people are showing how unique Russia is, and it might make you want to visit next winter — or grab a heated blanket and sit next to the fire.

Some dogs are better equipped for snow, and this dog is not one of them. It looks like a little babushka in her snowsuit and blanket. It is a good thing it has boots to protect its sensitive little paws. We don't know how any dog survives these harsh winters. 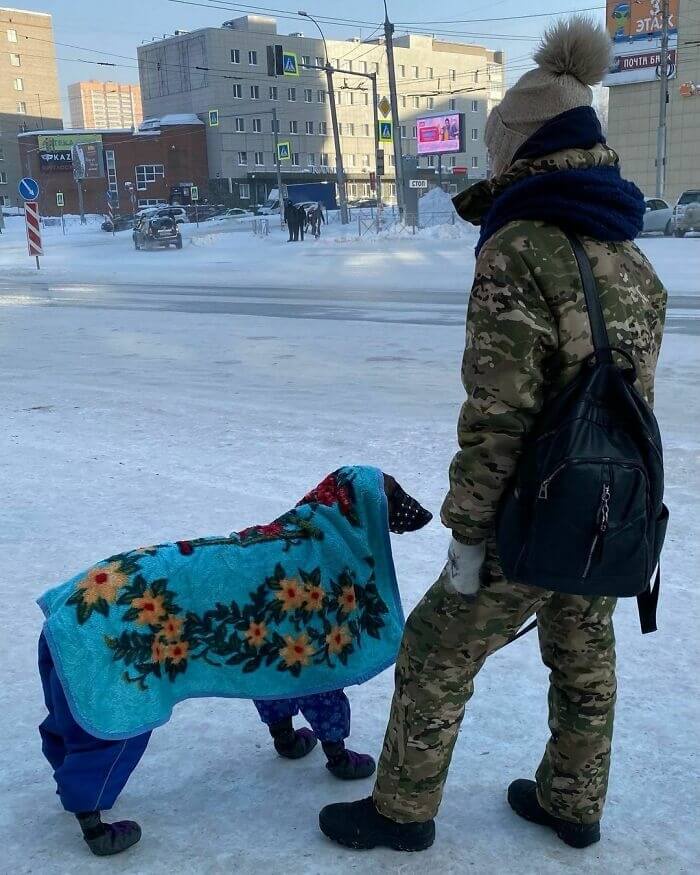 Also, who let this dog walk outside alone? We can't see her owner in this photo because she is so well camouflaged, and there is just a floating backpack and hat. She must be wondering where her human is and why they let her go for a walk in the cold alone.

Is this something out of Star Wars, or did this really happen? This natural phenomenon occurred over Siberia, and the effect is created by the reflection of light from tiny ice crystals that are suspended in the atmosphere or that comprise high-altitude clouds. 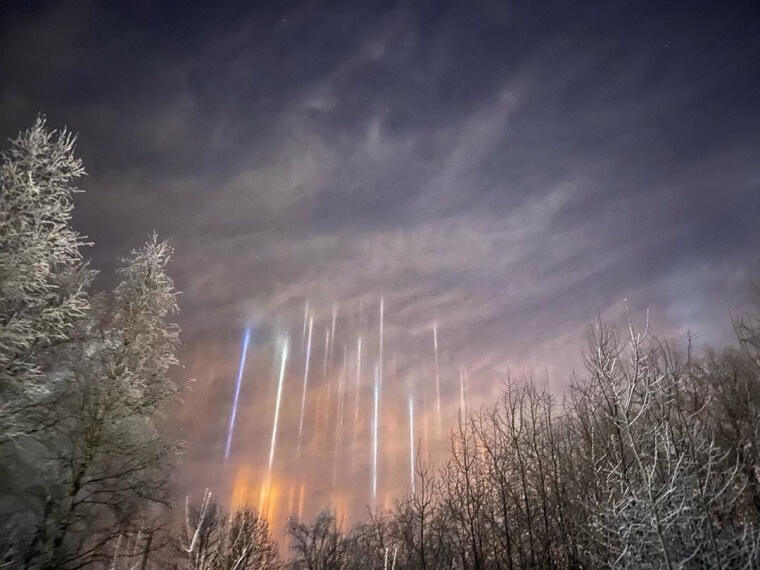 It's like a bunch of alien space ships sent beams of light down to abduct cows and people. Don't get too close, or you might find yourself surrounded by green figures and think you are having a nightmare only to wake up on a distant planet.

3. When You Hang Your Clothes Out In -40 Degree Weather

Life lesson from everyone who lives in Russia, don't hang your clothes out to dry when the temperature drops into the negatives. Your clothes will not dry, they will just freeze, and then you will have stiff frozen clothes. No one wants their clothes to be cold in the winter. 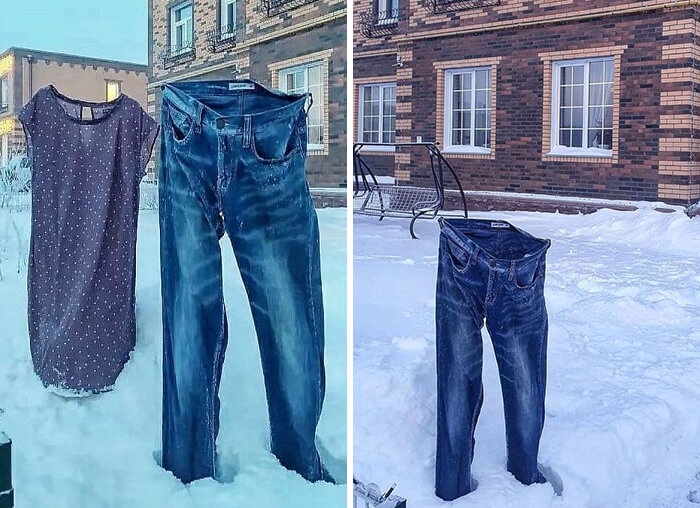 These pants look like they are about to walk away and find someplace warm to dry. It's as if a shirtless person put on an invisibility cloak that only covered the top portion of their body. We would hate to be that pair of jeans right about now.

4. Jack Frost Must Have Been Here

It is incredible what you will find in mother nature. Russia gets so cold during the winter that practically everything is covered in frost, and when you look closely, you can see some amazing things. This looks like it could be Jack Frost's calling card that he leaves behind to show that he was there. 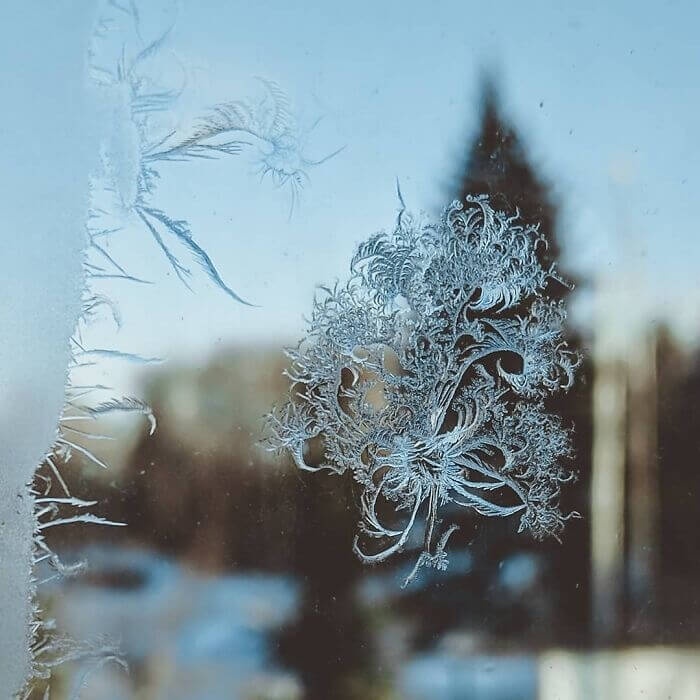 If someone could replicate this design, cover it in gold, and turn it into a wallpaper pattern, it would be fit for a palace. It's like a whimsical tree that you would find in a Dr. Suess book. It's gorgeous to look at until you are standing there and realize just how cold it is.

5. A City Buried In Snow

The kids must have been excited because this is at least two snow days worth of snow. The city was buried in snow, and no one could find their cars until they did hours of digging. They must have had epic snowball fights and made giant snowmen. 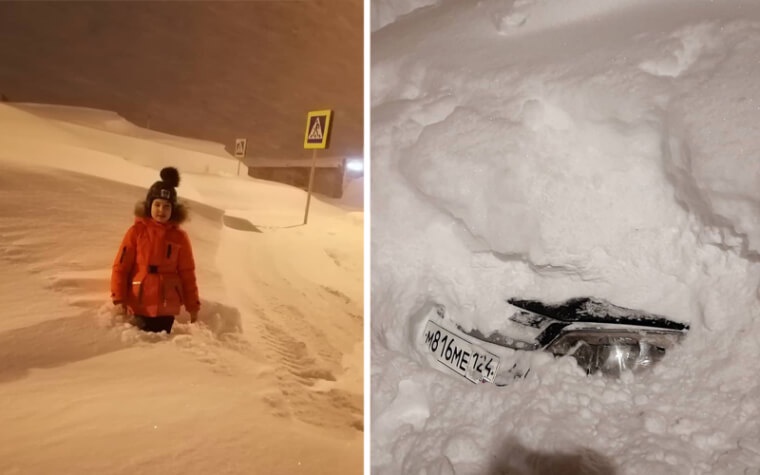 The girl seems happy to venture out into the deserted streets and disrupt the fresh snow. It must be so satisfying to create a deep path in the fresh snowfall. As children, we prayed every snowstorm would be this massive so that we could get out of school.

Like the light beams, these UFO clouds look a bit ominous yet whimsical and fun. These are known as lenticular clouds, and they formed over the Northern Ural Mountains. You don't see things like this every day, and it might be confusing the first time you experience it in person. 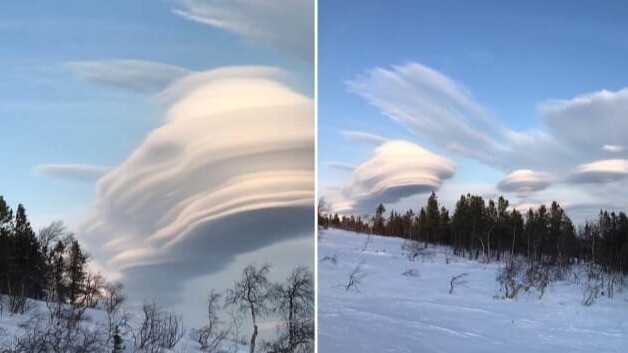 Is this how aliens are disguising their ships now? They realized humans could identify their UFOs, so they started appearing in cloud ships so we would let our guards down. That would be clever; however, we are now suspicious of clouds too.

7. With Love From Siberia

When you walk outside, and all your face slowly gets covered in a frost. This woman has everything covered except her face, and she is probably rethinking that choice. It's time to break out the ski mask when your facial hair starts to freeze over. She looks like she regrets leaving her house and wants to return to the warmth immediately. Who can blame her? We would never survive a second in that weather. We hope she wasn't outside for too long because her face might get frostbite.

Mother nature is a master artist. She creates so many beautiful things on this planet, and this is just another piece of her artwork. These flowers are covered in a layer of frost, and they look like delicately folded paper flowers covering the ground. 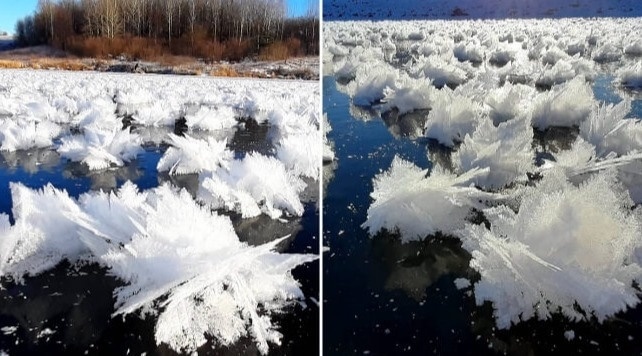 It almost looks like you would either cut yourself if you touched one, or they would crumble the second someone laid a finger on them. We would be too nervous about getting close and ruining them by giving off too much heat or stepping all over them.

9. Breakfast For The Invisible Man

You can't see the person eating the food because he is obviously invisible or left in such a hurry that the food was still mid-air. The weather in Russia was so cold that the food was frozen in a floating position. Someone cracked an egg, and it froze immediately. How cold does it have to be to freeze like that? It's like someone created a sculpture of breakfast being made. It would be a unique art installation until it started to warm up and became normal food again. Then it wouldn't be as cool as this

7 signs a man may be near death