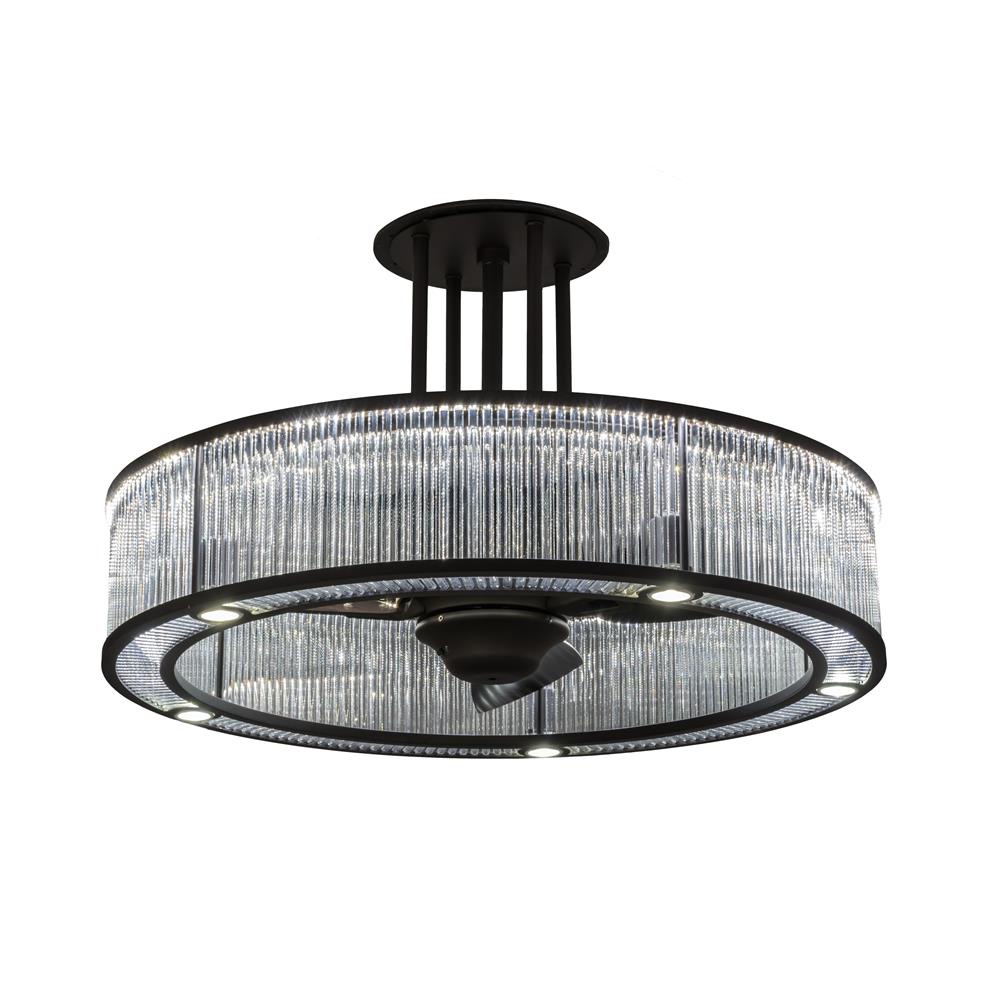 So, today, we’re going to have to kick off this list with a chandel-air that is absolutely, positively breathtaking. Meyda/Tiffany is famous for creating some of the most decadent chandeliers on the planet, and their ceiling fans aren’t too shabby either. It’s no surprise, then, that they are currently the makers of one of the most expensive ceiling fans on the market.

This striking work of art is a chandel-air that really emphasizes the “chandelier” part of its design. The LEDs highlight a bunch of glass-looking crystals that line the entire chandelier. It’s ideal for a smaller room that needs a lot of style. For only $28,000, you could bring this astonishingly pricey work of art home with you. 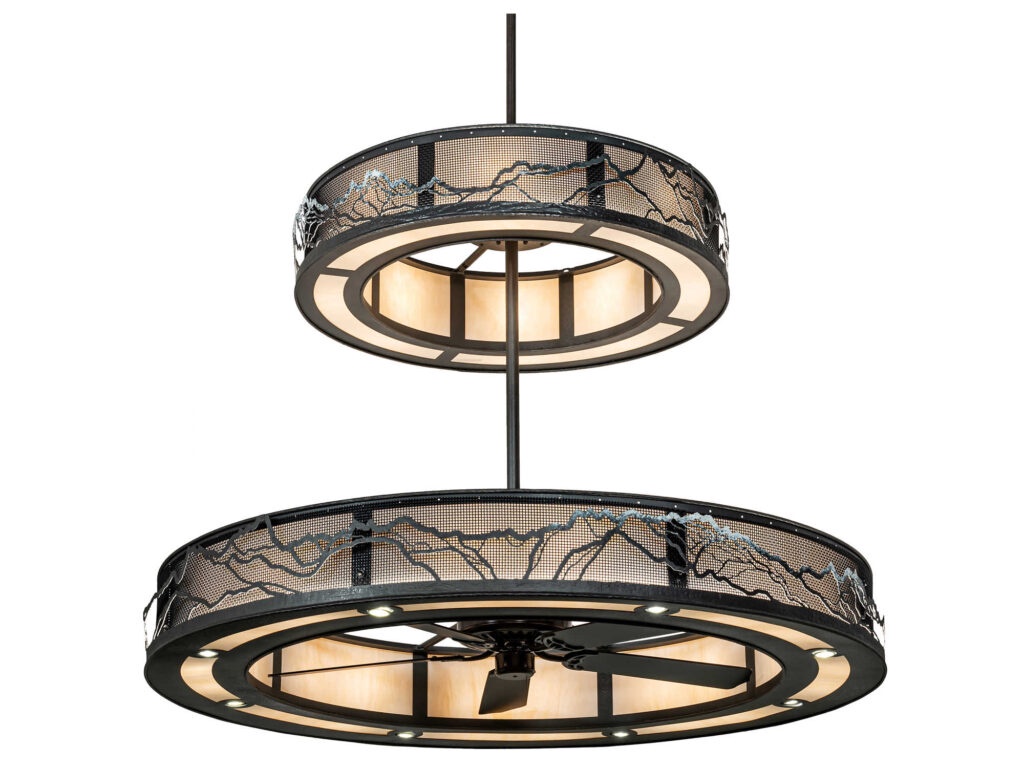 Now this gorgeous number is luxury incarnate! This is a highly unusual dual-tier ceiling fan—erm, chandel-air. 32 LED lights help turn this faux marble ring chandelier aglow without giving you the harshness of bare bulbs. To help avoid too much brightness, the designers of this light fixture added real, natural iron accents to the exterior.

It looks like marble, encased in wrought iron with a marble pattern. The end result is a look that is best described as totally magical. The price tag, though, is what’s truly fit for royalty. This uniquely large chandelier fan will run you $27,000. That’s about the same price as a car. 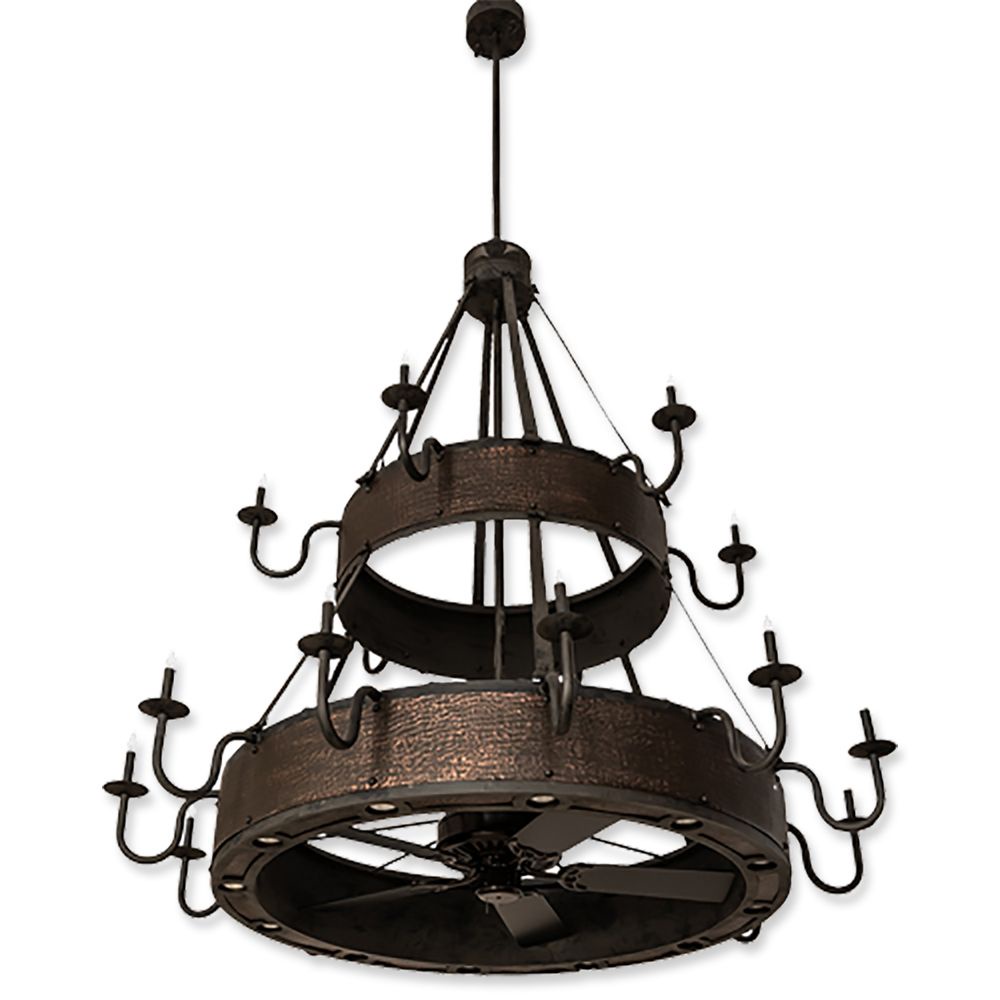 Is anyone else getting crazy Beauty and the Beast vibes from this chandelier fan? This is one of many, many similar models that Meyda makes, but for the sake of this article’s length, we’re going to showcase only one: the most expensive ceiling fan of this particular line.

This particular model is a dual-tiered chandel-air with two different fan systems to help keep your home cool and breezy. It’s 74 inches wide, features 18 small LED lights, and offers a gorgeous blackened, brushed copper patina exterior. Want to grab one for your home? Be our guest. It’ll cost you $19,800. 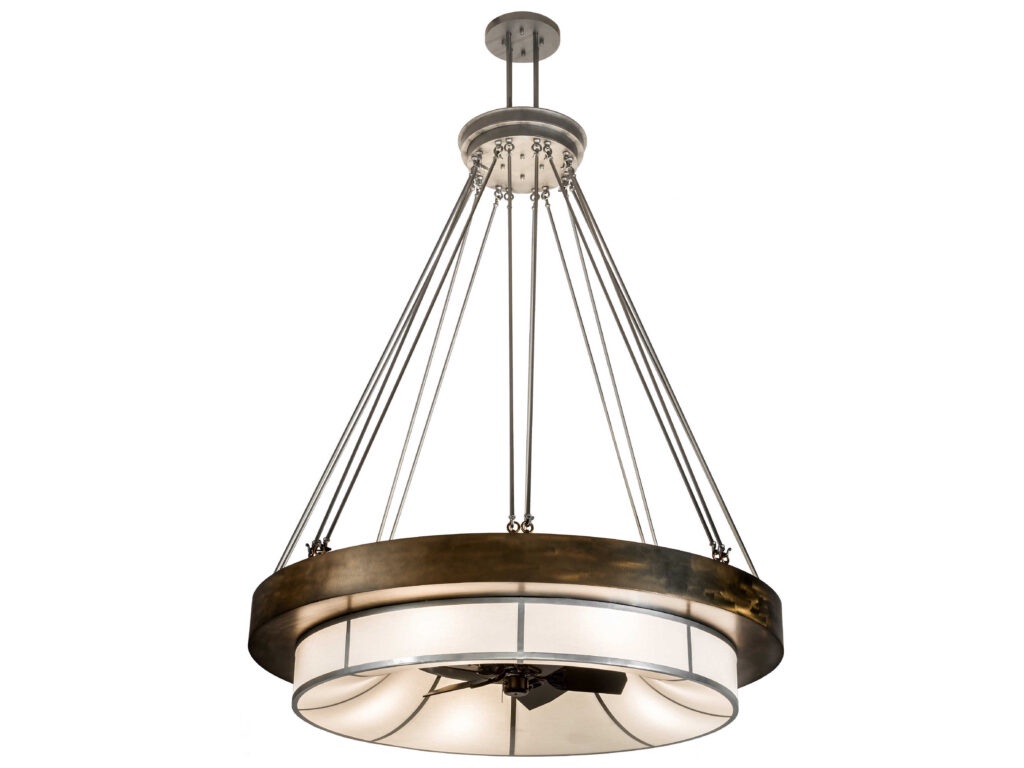 Meyda Tiffany strikes again, this time with an extremely luxurious brushed copper patina-look hanging chandel-air. The ceiling fan is obscured by lights that are covered by a panel. The end result is a ballroom-style hanging ceiling fan that looks like it was straight out of The Great Gatsby.

Snagging one of these will not be cheap. At the time of this writing, it costs $16,110 to get this Tiffany lamp. 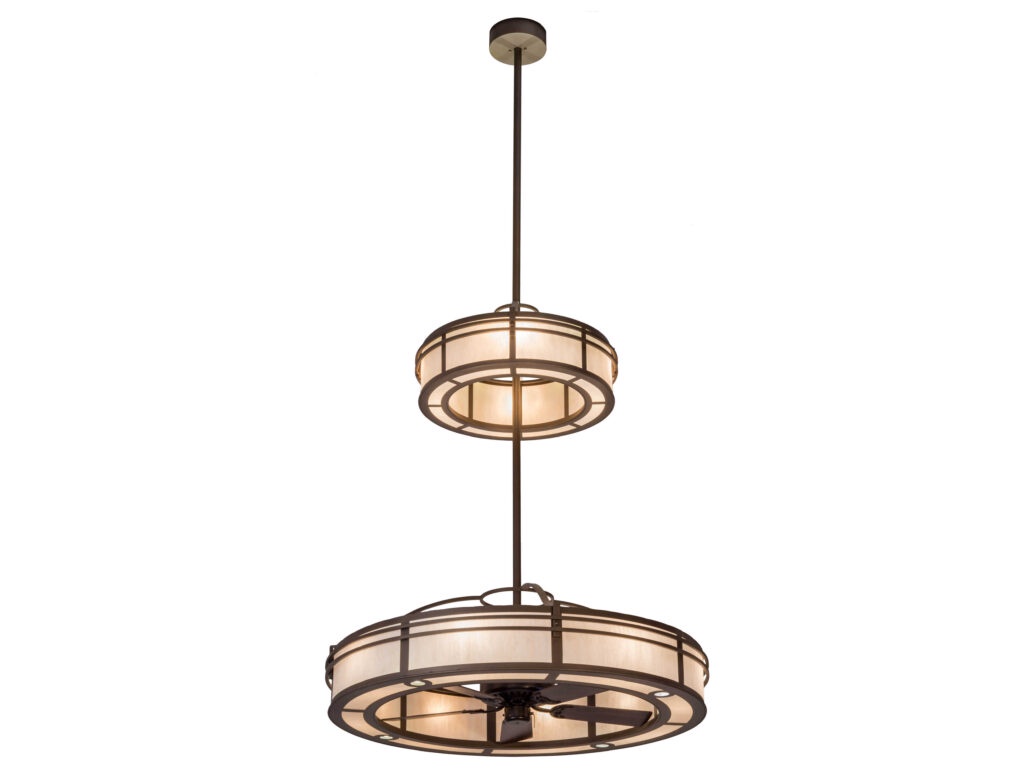 You know, it’s kind of strange. Meyda Tiffany, most commonly just called “Tiffany,” is the same company that kicked off the stained glass Tiffany lamp trend of the 1970s and 1980s. Nowadays, their most popular and expensive lamps all have a classic Art Deco feel. The days of stained glass have come and gone.

This simple yet striking chandel-air is a good example of the new vanguard in the world of interior design. It’s a beautiful LED lamp that features a hidden ceiling fan and a gorgeous iron cage design. A total of 24 LED lights line both tiers of this lamp. There are 16 on the bottom, and eight on the top.

Getting this double-decker lighting system is going to be pretty expensive. At $13,500, this is going to be a pretty painful punch to your wallet if you have a fairly average income. 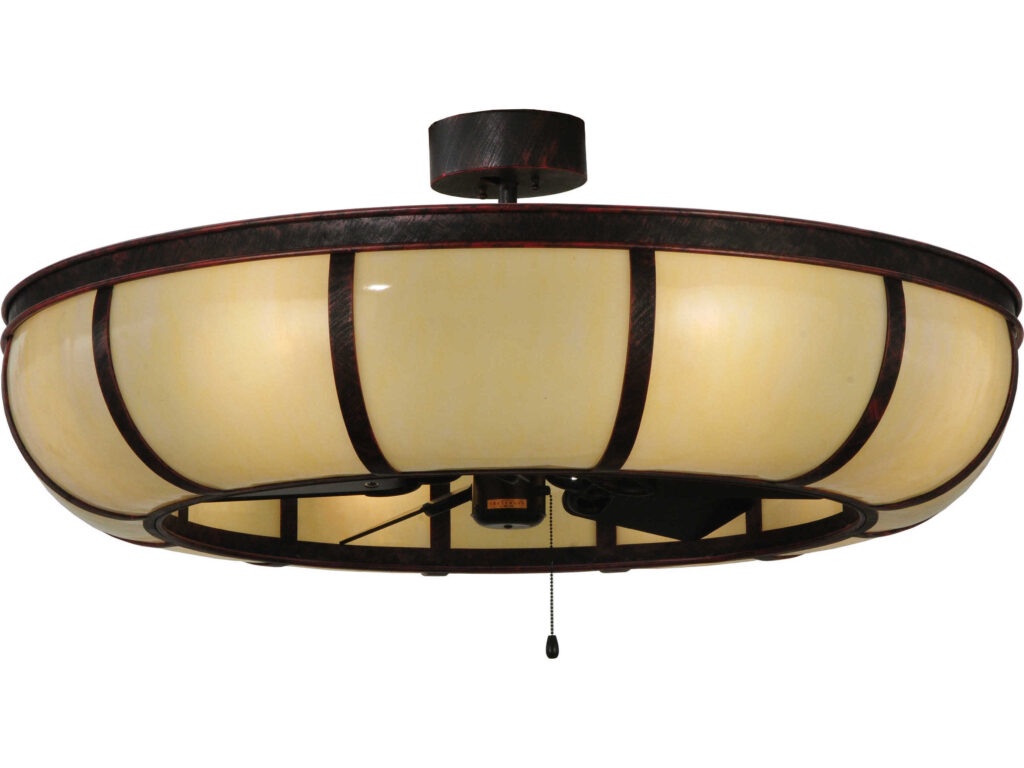 This ceiling fan has panels that hide the blades and eight different hidden bulbs that give the entire fixture a uniform glow. As you might be able to tell from the look of it, this fan was inspired by the large dome lamps that were popular in Art Deco buildings.

Is it old school? Absolutely. Though it is old school, it still retains that timeless, modern appearance that fits perfectly with an upcale beach house or a luxury villa. Getting a Tiffany lamp, of course, means you’re going to be paying a pretty penny regardless of what you pick. This particular model goes for $7,727 on Luxe Decor at the time of this writing. 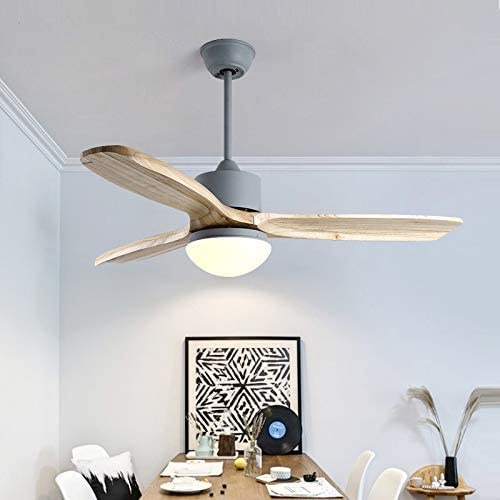 Ask any interior designer and they will tell you that the clean, crisp look of Nordic furniture is so hot right now. Whether you’re a hygge fan or just like the modern look of it doesn’t matter. What matters is knowing that you’ve got a ceiling fan that can pair with any type of decor that you want to bring in. Nordic style ceiling fans will do that perfectly.

This remote-controlled ceiling fan offers heavy cooling, a beautiful ambient lighting boost, as well as a super sleek style. If you want to choose the grey option, you will have to shell out a very hefty fee of $6740. Needless to say, it takes a fancy person to afford such a fancy, fancy fan. 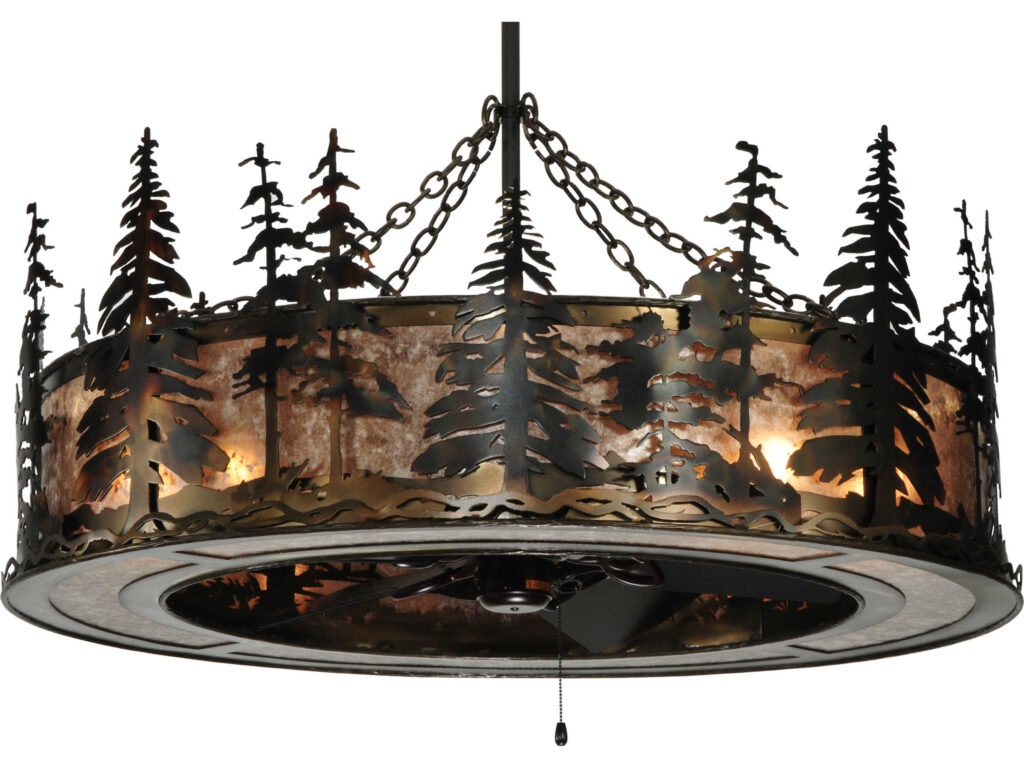 When most people go shopping, the words “rustic” and “expensive” almost never go hand in hand. I mean, that whole aesthetic is usually framed by the term “shabby chic” for a reason. However, this piece definitely shows that ceiling fans for rustic homes can be just as pricey as those that are found in classic Italian mansions too.

This fan doesn’t look like a fan, per se. It looks more a light—and it should. It is a fan and light fixture combo that uses a beautiful shade with sculpted iron to hide the blades of the ceiling fan. On the shade, you can see a scene of a lone majestic elk frolicking among the trees. If that isn’t a perfect accompaniment to a log cabin home, I don’t know what is.

This level of artwork is not going to come cheap, especially among “Texas millionaires.” To get this elegant hidden ceiling fan, you need to shell out $5,641. Oh, and there is a two-tier version of this, too. If you want to splurge for a dual-tier option, then it’ll set you back $13,000. 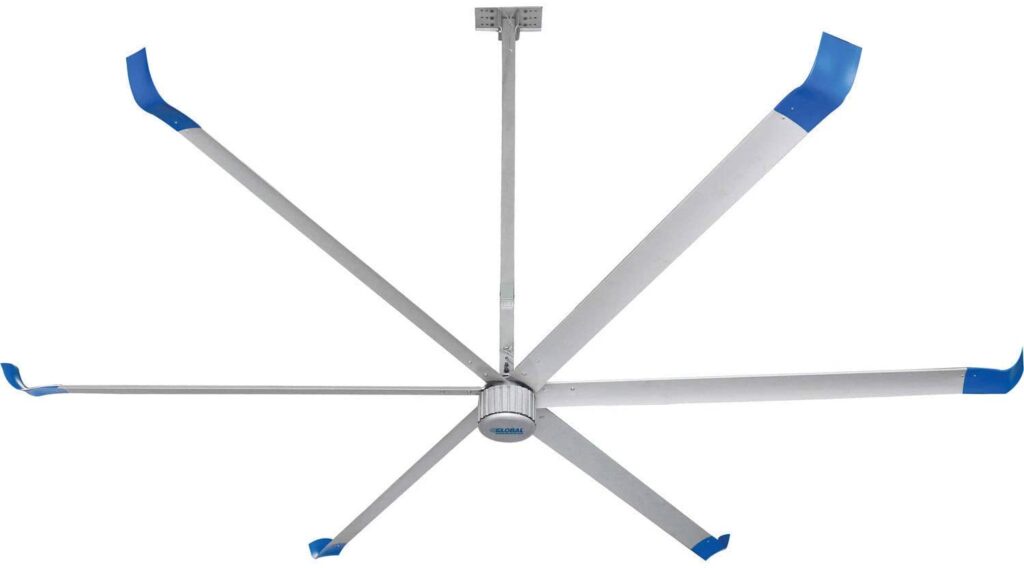 Do you have a warehouse that you need to cool down? Maybe a pro auto shop that needs to have a little extra chill? Then you might not want to try to splurge on pretty yet pricey models. What you’re looking at above is an industrial ceiling fan that spans a whopping 18 feet across.

This fan is simple, smart, and highly effective at cooling people down. That’s basically what people who run a business need. Of course, we have to enjoy and appreciate the stark modern look that it offers. If 18 feet is too large for you, you’ll be happy to know that they have options that are smaller. Some are even as petite as 10 feet across.

Despite their “bare bones” look, all of these fans are really pricey. Most hover between $4,000 to $5,000. The model above will set you back $5439, making it the most expensive model of its type on this list.

So, there are two main companies offering up extremely large, industrial ceiling fans on Amazon. Hunter ceiling fans have five blades, while Global Industrial Store makes six-bladed fans. Both have a 220-Volt power that is meant to cool down exceptionally large spaces. This one above has a total diameter of 24 feet, making it a uniquely massive ceiling fan, no matter how you look at it.

A name like Hunter is meant to inspire confidence. Their ceiling fans are known for being sturdy, while still being affordable for the role that they play. A warehouse owner who wants to have this top-tier fan will have to shell out $5320 for the privilege. Fans of living in a massive warehouse loft will want to snag one, especially if they are in a hot area.