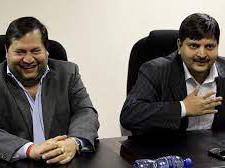 Gupta lieutenant and acting CEO of the Guptas' lead association, Oakbay Investments, Ronica Ragavan has been yielded bail of R10,000. She appeared quickly in the Bloemfontein Regional Court on Friday morning, 8 October, after she was added to the overview of decried in the R24,9-million criminal case in the Free State, last week.

Ragavan was reserved to appear in court on 28 September, yet fail to participate, alluding to clinical reasons. A warrant was given for her catch anyway stayed by the court.

She is one of two supervisors of the Gupta-had Islandsite Investments 180 (at the present time in business rescue) and has been an enthusiastic Gupta delegate for over twenty years.

Standing up to two counts of coercion and tax avoidance as far as concerns her in the Gupta try, Ragavan displayed in the Bloemfontein Regional Court on Friday, in both her capacity as upbraided eight, similarly as in her representative cutoff as in front of Islandsite (faulted seven for the circumstance).

Sharma's sibling by marriage and co-accused, Dinesh Patel (Nulane Investments specialist) was not in interest in view of clinical reasons.

The R24,9-million criminal case emanates from a 2011 due dauntlessness drove for an endeavor for the Department of Rural Development and Agriculture in the Free State.

As a part of the condition of her bail, Ragavan isn't permitted to leave Gauteng without giving or gaining the approval of exploring official Colonel Mandla Mtolo. The State furthermore referenced that Ragavan surrender her ID.

Ragavan's appearance in court returns on the of an astonishing promise that she recorded before the Free State High Court, as a component of the Gupta family's undertakings to stop a draft limitation demand against Islandsite from being made last.

Examine in the Daily Maverick: Blame me, not Mr. Atul: Ronica Ragavan's stunning real intercession to ensure her Gupta boss

The court has deferred the Nulane matter briefly to 6 December, to settle the arraignment and other starter matters.