By SheSays (self media writer) | 16 days ago

A family is at war after a young man held his mother by the throat accusing his mother of bewitching him and stalling his life.

Last Thursday, 26-year-old Letlhogonolo Isaiah allegedly uttered the following warning to his mother, Chandapiwa Isaiah, “Your grave is already dug, all that is left is for me to kill you.”

Appearing before Francistown Magistrates’ Court the next day, the Tonota native maintained his innocence, claiming, “I did not say I would kill my mother, I told her she was bewitching me and that was why my life was a mess.”

Court heard that shortly after the alleged threat, Chandapiwa engaged her neighbours in an effort to make peace between mother and son.

Her attempts reportedly proved ineffective, however, as a furious Letlhogonolo apparently showed no signs of remorse and stood by his words.

Terrified that things were about to turn ugly, Chandapiwa called the cops who promptly arrived and took the younger Isaiah off to the prison cells. 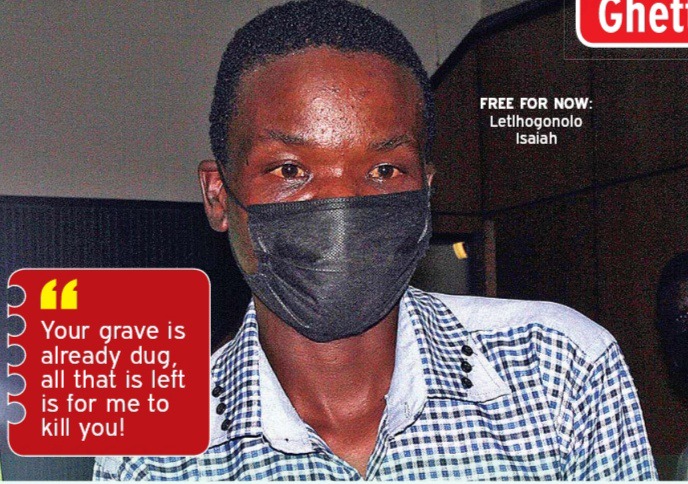 Attempting, unsuccessfully, to secure the suspect’s remand, the Investigating Officer, Fanilo Herbet Manyepedza told court, “We fear that if granted bail he will execute his intentions of killing his mother or subsequently take his own life after committing the offence.

“I am saying so because of the way he behaved during his arrest. The other thing is that we are yet to collect the statements from the witnesses.”

It was not enough to keep Letlhogonolo behind bars though, as the accused told court if granted bail he would stay with his uncle in Mahalapye.

His words convinced Magistrate Thabang Chokwe to set him free, providing he pays P1,000 and brings two sureties each bound to the same amount.

“Do not interfere with the investigations and do not enter the complainant’s premises. The accused is to report himself at Mahalapye Police fortnightly on Monday between 0730 and 1630 hours,” ordered Magistrate Chokwe, setting the next mention for 30th November. 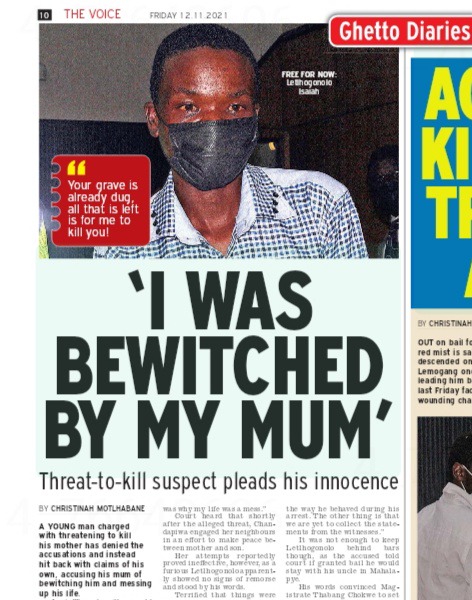