Thousands of Tunisians demonstrate in Sfax after landfill protest fatality

One protester was killed by tear gas inhalation during demonstrations against the reopening of an abandoned trash dump in Tunisia, which has been plagued by environmental difficulties in the North African country. 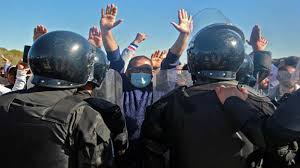 Protesters in Agareb, a suburb of Sfax in the central coast region of Algeria were dispersed by security forces using tear gas early Tuesday morning. Abderrazak Lacheheb, 35, died as a result.

According to a doctor and a member of his family, he died as a result of asphyxiation, and the prosecution claimed it had begun an investigation into his death. 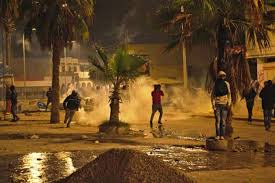 The interior ministry stated that Lacheheb's death was due to a pre-existing medical ailment.

People marched six kilometers (four miles) from the town to a landfill site that served a million people until it was shut down in September due to pressure from residents. On Wednesday, the city held a general strike.

Protests erupted as soon as the government announced it would reopen the site on Monday.

It was Wednesday when hundreds of people marched through the city singing: "We are entitled to a dignified existence! Clean air is a fundamental human right!"

Again, police fired tear gas to keep them from getting close enough to avoid a possible attack.

Anti-police protesters have accused the police of showing "contempt" towards the community, AFP reported.

A healthy environment and the right to a decent existence have been crushed in the last 24 hours because of the actions of security forces tasked with protecting rubbish from harm, the mayor claims.

Another individual stated: "If you close the landfill, we're outta here! As long as we're not allowed to leave, we'll fight until it closes for as long as it takes."

On account of disease and bad smells, the dump was his excuse for why things were so bad in the community.

Both men requested that their identities be kept private.

Agareb, the biggest landfill in the Sfax region of Tunisia containing its second city of the same name, was shut down in September under local pressure. 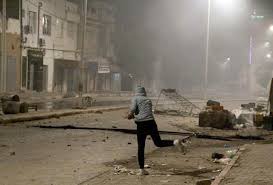 Toxic chemical waste is being dumped at a facility designated for domestic trash, according to local residents.

Trade union leaders called for an all-day national strike on Monday after what they described a "savage intrusion by security forces." Wednesday's march was the result of that appeal.

Trash has been piling up all over the streets of the Sfax region for the past few weeks, and protesters have taken to the streets in protest.

Since the closure of the Agareb plant, municipalities have refused to collect waste, requesting that the state come up with a long-term solution to the problem.

With an estimated 2.5 million tonnes of trash created each year, Tunisia has long struggled with disposing of it and recycling little.