During the assault trial that took place in the Randburg Magistrate's Court, EFF members Julius Malema and Mbuyiseni Ndlozi displayed absolutely no remorse for their actions.

The two leaders of the EFF have been criticized by the African Forum for the Rights of Minorities (AfriForum) for their testimony in court, with Ndlozi having taken the stand on Friday.

At the funeral of the late anti-apartheid activist Winnie Madikizela-Mandela, the two are accused of assaulting a police officer named Lieutenant Colonel Johannes Venter.

NDLOZI Flashes a Cheeky Smile in Court While Testifying

Throughout the entirety of his testimony, Ndlozi could be seen smiling on multiple occasions. Even State Prosecutor Michelle Hart had questions about the manner in which he conducted himself.

When the EFF MP admitted to pushing Hart, he did so with a grin on his face. Hart smiled back. When asked why he was smiling, Ndlozi did not respond, but instead said that watching the CCTV footage evidence reminded him of the humiliation that he had experienced.

AFRIFORUM Observes No Repentance on the Part of the Accused

AfriForum stated that it was abundantly clear from both Malema and Ndlozi's testimonies that the two did not feel any remorse for the actions that they had taken.

Reiner Duvenage, a campaign officer for strategy and content, said that the only role of the South African Police Service (SAPS) is to protect the community, and that prominent politicians need to be held accountable if they do not respect this role. 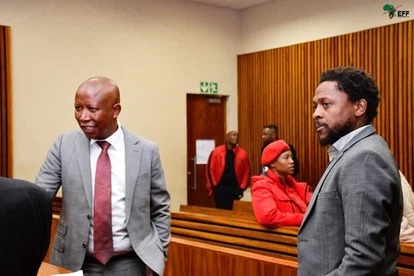 He stated that AfriForum, which provides something akin to a watching brief on the matter, will continue to advocate for justice in relation to the matter.

MALEMA CONFIDENT OF ACQUITTAL OF ASSAULT

According to AfriForum, EFF members Julius Malema and Mbuyiseni Ndlozi did not demonstrate any sign of remorse during their assault trial. Twitter/@EFFSouthAfrica's photos can be found here.

While addressing the press outside of the court, the leader of the EFF expressed his conviction that the judge will rule in their favor.

According to Malema, they have maintained that they have never believed there was a case. He stated that the majority of the judgment appeared to be in their favor, despite the fact that the court denied their application to have the matter withdrawn from consideration.