• The parties presented conflicting interpretations as to how the fighting started. 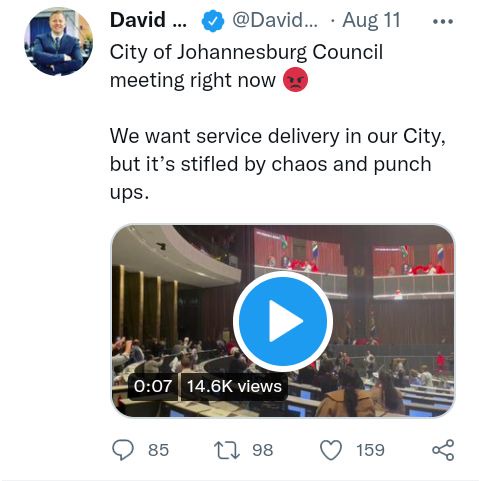 After a 24-hour council meeting in Johannesburg ended in suspension in the wee hours of Thursday morning due to a brawl, the Democratic Alliance (DA) filed charges of intimidation and assault against EFF members.

According to the news on social media, The Speaker of the City Council for Joburg, Vasco Da Gama, filed criminal charges against EFF members on Thursday morning at the Hillbrow police station.

After hours of deliberation, the council finally adjourned at 01:00 yesterday.

There were several topics to be discussed during the meeting that Da Gama called.

The most divisive issue was the council's decision to approve the interim secretary.

The candidate for council secretary backed by the Democratic Alliance (DA) was pushed through council processes that the EFF, the ANC, and other opposition parties said Da Gama had rigged.

The problem has been ongoing for months, but it finally reached a breaking point last Thursday when it was finally put on the agenda.

According to a proposal made by the DA-led coalition government, Madimetja Molekwa, who already works in Parliament, will take on the role of council secretary.

The opposition, on the other hand, thinks that Molekwa can't be chosen while the current acting secretary, Andile Gcobinca, is still getting paid.

By all accounts, Gcobinca's contract will be up for renewal in September.

Those who were against the government asked the DA-led caucus to wait to confirm Molekwa until the contract was up.

The EFF, the ANC, and smaller parties all raised objections when Molekwa's condonation came up for debate and vote after a grueling 24 hours.

Angry council members yelled insults at one another and demanded to be heard by the council speaker.

Several council members raised complaints and said things like, "If he speaks, I am going to speak also." into their microphones.

Some people blew on the microphones so the speakers wouldn't be heard.

The EFF and the DA gave contradictory accounts of how the conflict escalated. 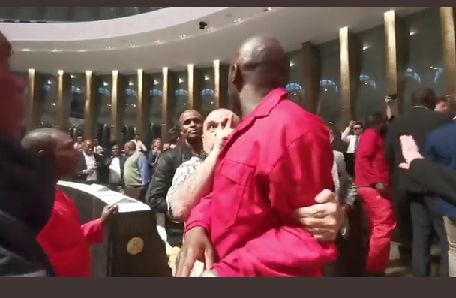 Leah Knott, a DA council member, told the news on social media that EFF members had asked for the speaker to be removed from the stage.

As DA councilors led Da Gama out of the council, EFF councilors attacked anyone close enough.

Knott claimed that an EFF member threatened to steal her phone as she sought to record the confrontation.

Knott claimed that EFF members were rough with a DA member who had a wounded arm.

"The transferred secretary holds a master's degree in management." Why the opposition doesn't want to back him is beyond me. Their arguments all hold no water. They chose to disturb council to prevent the item from being voted on, "-Knott remarked. 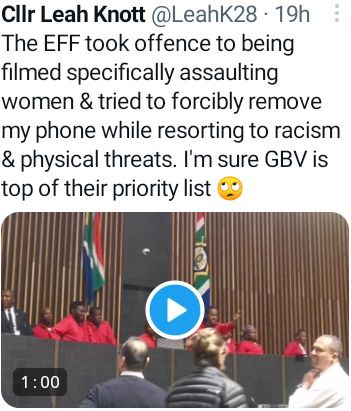 "The speaker was allegedly removed from the podium." The EFF started fighting everyone when their efforts failed. Whites and blacks were the primary foci of much of the discourse. Male representatives were directed to create a ring around their female counterparts. In addition to Councilman Benjamin, who was already nursing an injured arm, she was also subjected to some serious jolting. "In the words of Knott,

According to EFF councilor and caucus leader Sepetlele Raseruthe's interview with News24, the party is currently in a defensive position.

"We approached the speaker to claim the microphone. The combatants did the same, and the DA members struck one of us. What transpired there was just that. We had to protect ourselves, and the situation escalated into a fight. Despite being attacked, we had no intention of giving up. " It was Raseruthe who remarked. 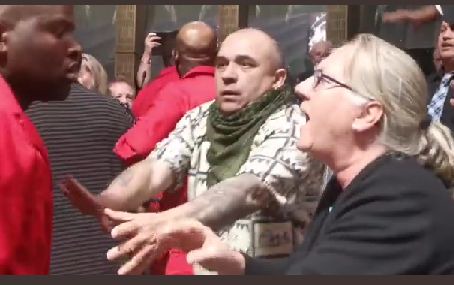 According to Raseruthe, the EFF thinks Molekwa is a fake secretary who has been acting in the role despite the council not confirming his appointment.

The ANC held Da Gama responsible for the anarchy.

Eunice Mgcina, who is the chief whip of the ANC caucus, said that the DA chose an interim secretary based on "subjective interest."