By Hot_Entertainment (self media writer) | 9 days ago 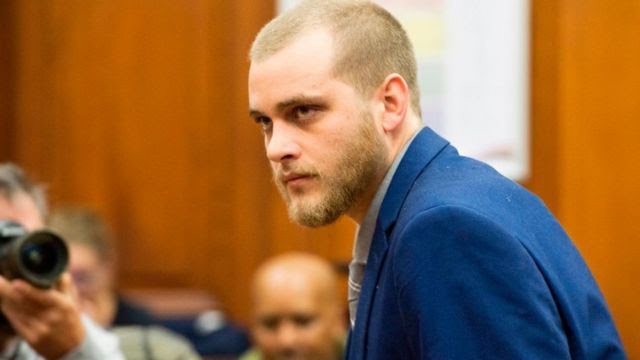 Henri Van Breda, who murdered his father, mother and brother with an axe in South Africa in 2015, has been sentenced to life in prison.

A South African paramedic describing the aftermath of the attack on the wealthy Van Breda family said it was the worst thing he had seen in his 39-year career.

"Blood ran like a waterfall down the stairs," testified now-retired Christiaan Koegelenberg.

More than three years after Mr Koegelenberg walked into the midst of that horrific scene, a judge has found the family's only surviving son, Henri, guilty of using an axe to kill his mother, father and brother.

His younger sister managed to survive the attack in their home in a gated housing estate in Stellenbosch in South Africa's wine region.

Van Breda, was 20 at the time of attack - but the motive for the horrific murders is still not known.

Some believe he did it was to inherit his father's multi-million dollar estate, but this was never proven.

Whatever the motive, investigators and South Africans alike have been left shocked by the violent nature of the attack.

Martin and Teresa van Breda were found in a pool of blood on the first floor of their home on the De Zalze Golf Estate on the morning of 27 January 2015. 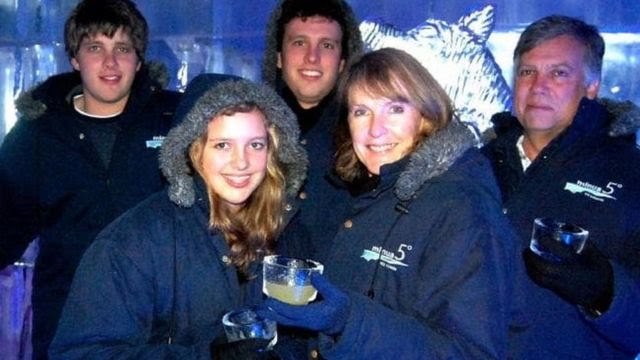 Close by was the body of their 22-year-old son Rudi and their 16-year-old daughter Marli, who was fighting to stay alive. Van Breda, meanwhile, had sustained only minor injuries.

The attacker had moved quickly and determinedly.

The Western Cape High Court agreed that the extent of the injuries meant that the assailant had intended to kill.

Van Breda gave a statement to police soon after the incident saying that a well-built black intruder was to blame.

He described a man wearing gloves and a balaclava breaking into the family home.

A recording of his phone call to the emergency services, made at around 07:00, was played to the court.

But who would want to kill the family in such a brutal and merciless manner?

He testified at his nephew's trial saying that his 54-year-old brother Martin and sister-in-law Teresa, 55, were loving people who had no enemies.

He told the court they had been a close-knit family.

'Houdini could not have broken in' 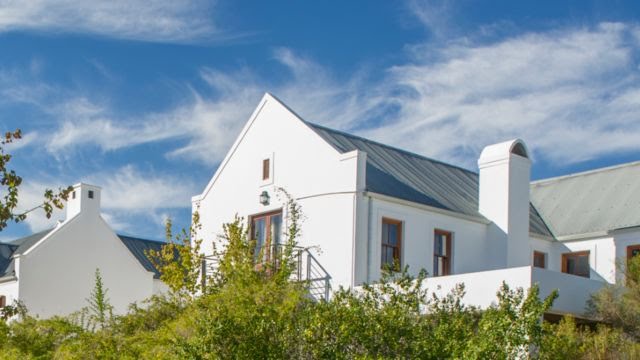 South Africa's high crime rate also made it believable - many live in fear of the "intruder in the mask".

Van Breda told the court that he wrestled the intruder, who then stabbed him in the torso with a knife.

But 18 months into the investigation, police believed Van Breda was the only suspect.

He maintained his innocence during the 67-day trial.

The court heard that many, if not all, of his injuries had been self-inflicted.

The prosecution pointed to many other inconsistencies in Van Breda's testimony.

Why would an intruder seeking to rob a home ignore valuable items downstairs and embark on a killing spree upstairs instead?

Van Breda could not answer that.

He also could not answer why there were no signs of forced entry or why he had escaped the deep gashes his family suffered.

Experts who analysed those gashes testified that they came from one attacker, who used the same amount of force on each victim.

The security experts at the trial all but said that not even Houdini could have broken into the Van Bredas' home.

The De Zalze Golf Estate has been described as a "medium-security" gated community.

But in truth it was considered one of the safest places to live in South Africa, with motion detectors, an alarm-system, 24-hour guard patrol, access-controlled gates and an electric fence. 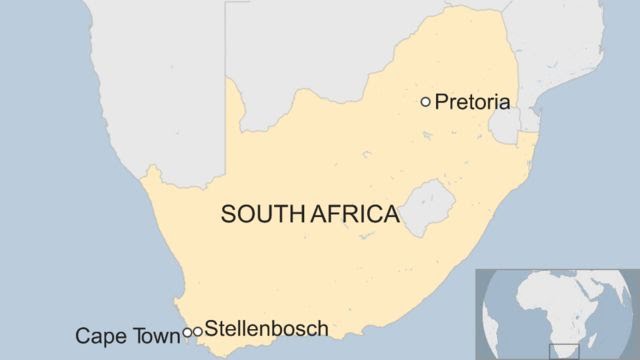 Another inconsistency that unsettled the court was the amount of time it took Van Breda to ring the emergency services.

Court papers reveal that a distressed Van Breda called his girlfriend at 04:42 numerous times, but they went unanswered.

He then searched the internet for local emergency numbers, not calling for help until nearly three hours later.

It was argued that Van Breda wanted his family to bleed to death.

Asked to account for the time lapse, the young man said he had collapsed after witnessing his family being attacked and remained unconscious for hours.

A year before the attack, the Van Bredas had been living happily in Melbourne in Australia.

They had decided to move back primarily because of Martin van Breda's business interests. 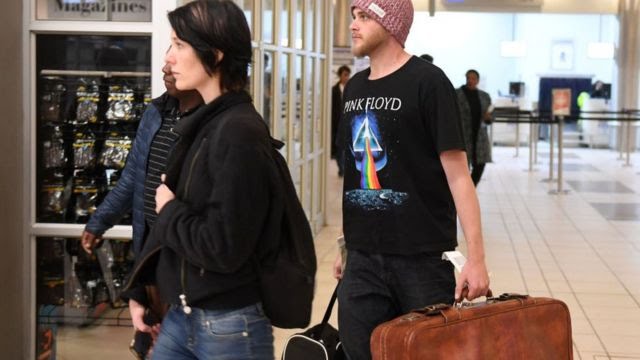 Henri van Breda, seen here with his girlfriend before the verdict, was on bail during the trial

His wife Teresa also wanted to live closer to her family.

Henri and their oldest son Rudi, a motor-sport enthusiast, remained in Australia as they were studying at the University of Melbourne.

They then joined the family in South Africa later in 2014.

In court, Van Breda said they were "a normal family" with normal disagreements.

If any of the children got into arguments with their parents, it was generally Marli who was "growing and rebelling," he said.

Marli, who underwent extensive surgery and physiotherapy after the attack, still has no recollection of the horrific day.

Her extensive head injuries and self-defence wounds were used to lead testimony in court. 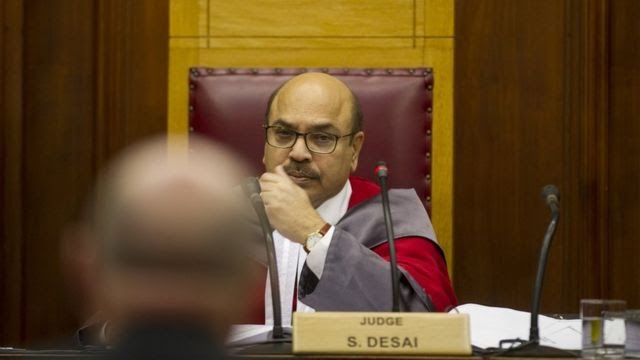 South Africa does not have a jury system and Judge Siraj Desai considered the evidence, saying a guilty verdict was "inescapable"

Of all the victims, Marli, had put up the greatest fight.

Unlike her mother and brother, who had minor defensive wounds, which may mean they were asleep shortly before the attack, Marli maybe saw Van Breda coming and tried to fight him off.

Her father, Martin, had deep wounds on his back. Delivering his sentence, Judge Desai said this was an indication that he had used his own body to try and shield Rudi from his axe-wielding brother, believing perhaps that his son would not strike him. But he did.

Addressing Van Breda in court, Judge Desai said the brutality of the attack showed "an unprecedented disregard for [your] family".

A neighbour living a few hundred metres from the Van Bredas' home told the court during the trial that she heard what sounded like loud, arguing voices late that evening.

The defence had argued it was the sound of a film being played at a high volume.

Neighbours and close family friends described Van Breda as always having been the "black sheep" of the family.

While the other Van Breda children had been thriving at school and university, he had decided to drop out of his studies.

He came to live with his parents in South Africa in August 2014, taking a "gap year" with no real plan for his life - perhaps disappointing his loving but strict father.

He reportedly also had a drug addiction, leading his parents to threaten to cut-off his allowance if he did not clean up his act.

Many believe the pressure of not measuring up to the expectations of the perfect family may have driven him to the edge, just months after he arrived in South Africa.

But justice has now been served for the unsuspecting victims of Henri van Breda. We still do not know what snapped in the mind of young Henri, only that something did and it left a trail of blood in its wake.

Parents watches in horror as gunmen shoot their children

Stellenboch FC kept up with their unbeaten this season