Clover items are being removed from store shelves by striking workers.

By ZakeAurora (self media writer) | 5 months ago

On Tuesday, about 70 Clover strikers marched through Johannesburg's central business district, demanding for a boycott of the company's products.

The employees marched from the headquarters of the Commission for Conciliation, Mediation, and Arbitration (CCMA) in Marshalltown to the city center, many of whom are members of the Food and Allied Workers' Union (FAWU) or the General Industrial Workers Union of South Africa (GIWUSA). They raided supermarkets, removing Clover goods off shelves and placing them in shopping carts.

Clover employees are on strike for the ninth week, and they claim they will not stop until their demands are granted. They are adamant.

They also want Clover to be self-contained from the Israeli corporation Central Bottling Company (CBC), which owns the company through the Milco SA partnership.

Workers reached a deal with Clover at the CCMA last week that delayed bonuses would be paid by Friday, January 14th. However, many employees claimed they had not been paid in full. 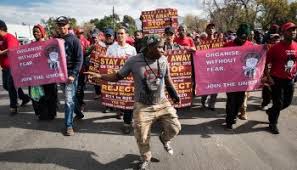 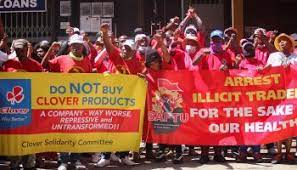 "We're perplexed because this is our 13th check, and we were expecting to be paid the same amount as our wage, but that hasn't happened. As an R12,000 earner, I expect to be paid R12,000, not the R400 they deposited "Justice Mokoting, who works at the Clover factory in City Deep, echoed this sentiment.

Security guards greeted the workers as they arrived outside Shoprite in Marshalltown.

Another signature at kaizer chiefs confirmed by Jessica motaung.