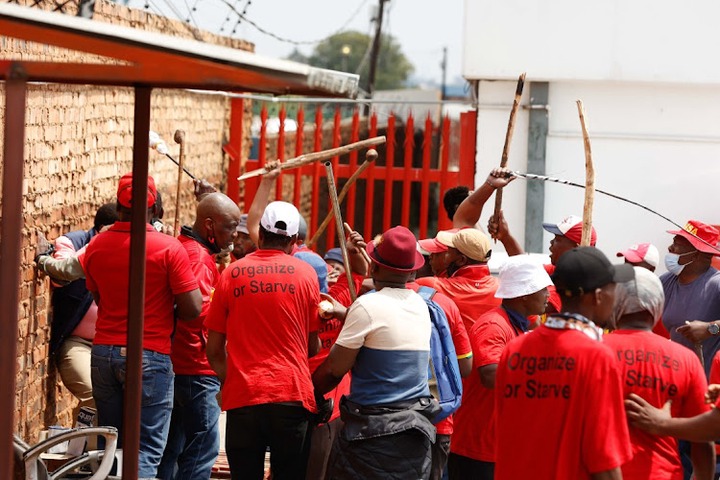 A transporter thumped and cut, a safety officer fiercely attacked and a National Union of Metalworkers of SA (Numsa) part shot were scenes that worked out in Boksburg, on the East Rand, as anarchy defaced the second day of the compensation increment strike.

Episodes of brutality were accounted for as right on time as 8am when transporter Ephraim Ncube was halted by patrons in red formal attire at Van Dyk Business Park.

Addressing Sowetan from his medical clinic bed, Ncube said he and his managers didn't know about the strike, thus he had driven from Pretoria to the town where he was assaulted.

He said he saw around 100 individuals from a good ways and they permitted different vehicles to pass however halted him.

Abruptly, they crushed the windows, hauled him out of the truck and attacked him with rocks. He was cut to his left side leg.

"I thought they planned to kill me," he said.

"I heard one of them saying they should leave me and they halted however they kept annihilating the truck.

"In the event that their chiefs had not interceded, I might have passed on," Ncube said.

Ncube, 34, supported wounds on his lip and said a portion of the individuals called an emergency vehicle for him.

He has been a driver for a considerable length of time and began working for Envirocycle De Wildt, a waste administration organization, five months prior.

The assault happened not exactly a day after Numsa general secretary Irvin Jim approached great many laborers who had accumulated at Mary Fitzgerald Square in Newtown, Johannesburg, on Tuesday to guarantee that: "Akukho gundwane elizoya emsebenzini (There's no rat that will go to work)."

Jim's telephone went unanswered on Wednesday and he didn't react to instant messages.