A former police officer who got her family members murdered for insurance claims, with the assistance of hitmen, has been found guilty on 6 counts of murder. She has been claiming to be innocent but the judge has found her guilty and charged her for the murder cases, Judge Ramarumo Monama discovered that Rosemary Ndlovu was indeed responsible for the murders of her sister Audrey; Audrey’s son Brilliant Mashego; her live-in lover Yingwani Maurice Mabasa; cousin Witness Madaka Homu; niece Zanele Motha, and another relative Mayeni Mashaba.

It was discovered that she tampered with the crime scene where Audrey died, so the judge found her guilty of defeating the ends of justice. Monama also convicted Ndlovu on four counts of defrauding Clientelle Limited, 1 Life Insurance, Old Mutual and Assupol. The suspect was also found guilty of conspiracy to commit murder for attempting to murder her sister Nomasonto, as well as seven counts of incitement to commit murder, and the attempted murder of her mother Maria Mushwana. 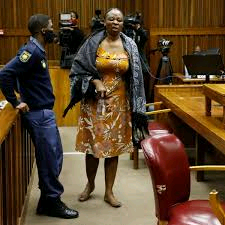 It was discovered that the suspect got more than R1.4 million in insurance payouts for her dead relatives, She used to work at the Tembisa police station at the time of her apprehension. Ndlovu was charged with 6 counts of murder, 4 counts of fraud, obstruction of justice, and 8 counts of conspiracy to commit murder. It was revealed in court that the suspect received R700,000 insurance payout after her sister Audrey was strangled to death.

Audrey’s son found out that Rosemary had received insurance payout for his mom’s death and confronted him, he was brutally murdered after confronting the suspect. Her partner, Mabasa, was also murdered and Ndlovu got paid R416 357. Both Homu and Motha died from horrific wounds after they were brutally attacked, and Ndlovu got paid out R131 000 and R119 840 respectively in insurance payouts.