Phoenix Massacre: Lets justice be done as part of building Peace and Hamony 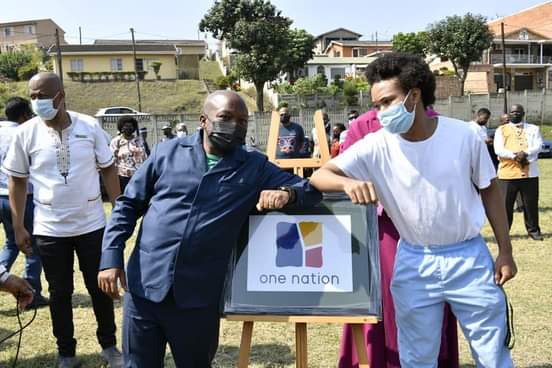 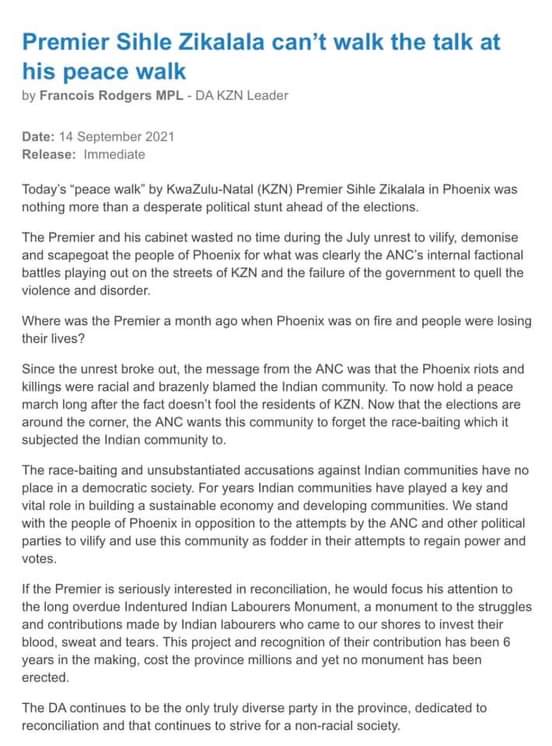 KwaZulu Natal Premier Sihle Zikalala has reaffirmed that peace should remain our foundation, virtue, and ideal if we are to speed up social transformation and bring justice to all.

Premier Zikalala was speaking today, 14 September 2021, during the peace walk in honour of the people who lost their lives during the July civil unrest.

During the peace walk from Phoenix Sports Complex to Bhambayi Stadium, the Premier was joined by Members of the Executive Council including MEC for Arts, Culture, Sport and Recreation Hlengiwe Mavimbela, MEC for Social Development Nonhlanhla Khoza, MEC for Transport, Community Safety and Liaison Neliswa Peggy Nkonyeni, MEC for Economic Development, Tourism and Environment and Affairs Ravi Pillay and MEC for Education Kwazi Mshengu.

The peace walk was also joined by the Deputy Chairperson of the Moral Regeneration and Social Cohesion Council Bishop Ruben Phillip and civil society, forms part of the provincial government’s concerted efforts to enhance unity and social cohesion in the province following the civil unrest and racial tensions. The government of KwaZulu-Natal has adopted a 365-day social cohesion and moral regeneration programme as part of building a united and a peaceful province.

Speaking during the event at Bhambayi Stadium, Premier Zikalala said: “Only through sustained peace, not through repression, violence, or the barrel of the gun can we manifest the promise of a free, united, non-racial, non-sexist, equal and prosperous society. During the tragic events of July where 300 people lost their lives in the looting and violence across KwaZulu-Natal and Gauteng, much attention was focused on Phoenix.”

“Criminal elements also exploited the situation to kill and maim. That criminal intent had a racial bent and we must say with one voice - African and Indian, young and old, Christian, Muslim and Hindu - that we condemn that without any reservation. Those persons charged with the killings must be dealt with appropriately and sternly in our criminal justice system. Wounds will never heal until and unless there is demonstrable justice in all its facets. We walk these streets today in the belief that peace and justice is possible,” said Premier Zikalala.

Premier Zikalala said we must acknowledge the peace-loving people of Phoenix, Bhambayi, Inanda, Zwelisha, Amouti and surrounding areas for coming together in forums, dialogues, prayer meetings and sporting events.

“The clear message is that the peace-loving people in these communities stand firmly against violence, killing, looting, racial profiling or any other negative attitude that risks dividing people. We applaud you for the peace structures that have been set up organically from among the people. We applaud the activists, religious leaders, traditional leaders and ordinary men and women who immediately rallied to calm the tensions and have sanity prevail. We applaud those who rallied to protect their neighbours and to make our streets safe for everyone whatever their race,” said Premier Zikalala.

Working with religious leaders, the provincial government has since formed the Social Cohesion and Moral Regeneration Council which includes prominent members of the society including Bishop Phillip.

Premier Zikalala also officially unveiled the KwaZulu-Natal “One Nation” logo at the Rydalvale Sport Ground in Phoenix as a symbol of peace and unity among communities in the province.

The logo is part of the initiative by the provincial government to bring unity and social cohesion after the civil unrest which resulted in racial tensions in some parts of the province.

The logo was designed by Tshiamo Molehabangwe, a student from the Durban University of Technology. The designer used broken tiles as a metaphor to highlight the beauty behind how different pieces can come together and form something beautiful despite being broken. The different tiles represent diversity in South Africa and how we can rebuild together despite our differences.

The competition is part of the KZN Provincial Government programme in memory of those who have lost their lives during the unrest.

Various speakers at event emphasised the need to create a conducive environment for communities to forge unity and be able to co-exist. 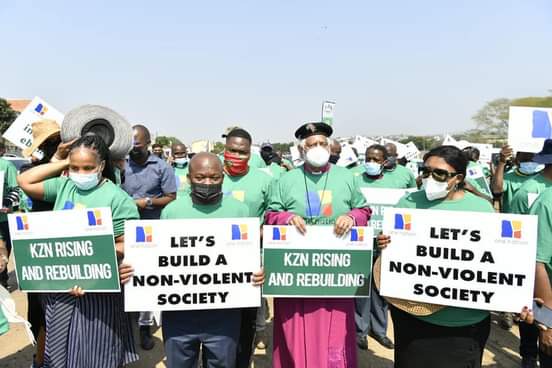 As a symbol of peace and unity, 36 doves were released to remember the tragic deaths of those lost their lives during the unrest. Each of the doves carried the names of all the victims. 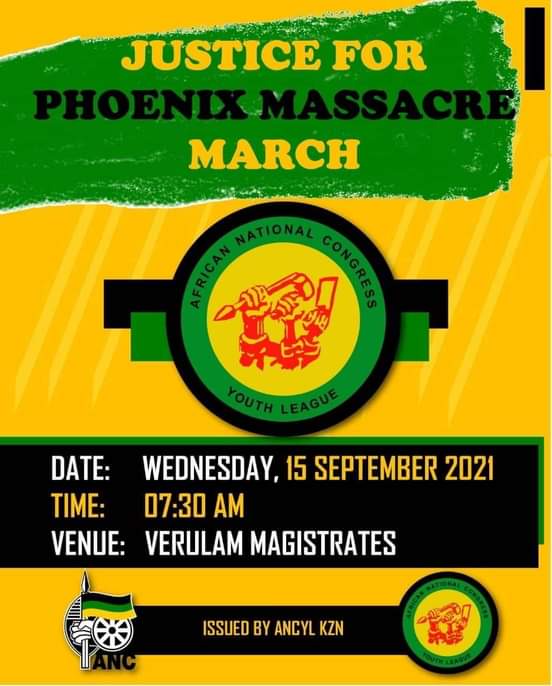 In addition - What about our farmers, women and children, who are killed in the 100s every year, if not in a month. Nothing is spoken about that.

Where's the free water and electricity that was promised to us all?

Where's the houses for the masses?

R500bn stolen by your government, meant for us, the people of SA!