South Africa was known as a peaceful and loving country, but the number of crime rate in the country recently is scary. It all began when the people of thembisa engaged in a violent protest against the government for not providing every necessary things needed in the state. This protest claimed the lives of many individuals including the destruction of many public and private properties like, cars, houses, schools and even shops.

There are many scary news trending on all social media platforms, but one of them have been making headlines on every news sites, according to multiple reputable sources, it was stated that a man was killed in Johannesburg for terrorising the streets with gun and other deadly weapons.

In a photo that was captured, we can see the lifeless man with a gun on his hand. Many social media users has been sharing their thoughts on the news, some said the man should have been captured, they believed that there may be something wrong with him, that's why he's portraying such behavior publicly why some people believed they officers are right for killing him as soon as they can. 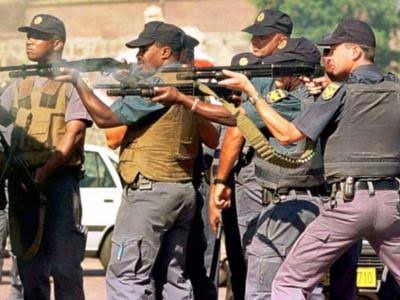 Photo Used for illustrative purpose only

For me, I think killing him was the best option, he have a gun and could kill anybody, waiting for him to be captured alive might be very risky, I will give the police officers a job well done for what they did.

What do you think about this article? Hsare your thoughts and follow for more interesting updates.