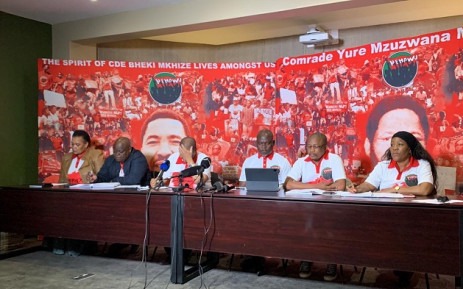 JOHANNESBURG - The National Education, Health and Allied Workers Union (Nehawu) said that it was moving toward the courts to have the excusal of five representatives at the University of South Africa (Unisa), who are likewise the association's shop stewards, announced unlawful.

Nehawu has blamed Unisa for botch and neglecting to follow the right methodology while firing the laborers' work contracts.

The association's authority gave a report on the compensation dealings stalemate at the college as well as at the South African Revenue Services (Sars) during a media preparation at Kibler Park on Tuesday.

The strike by Unisa laborers has entered a fourth week and among their requests, laborers need a 10% compensation increment no matter how you look at it.

Nehawu secretary-general, Zola Saphetha, said that the terminating of the workers exhibited an obtrusive negligence for work regulations, faulting the organization's bad habit chancellor for the ongoing stalemate.

"The VC didn't follow the legitimate necessities as far as Schedule 8 of the Labor Relations Act 66 of 1995 as changed, that's what which expresses: 'discipline against a worker's organization delegate or a representative who is an office-carrier of a worker's guild ought not be established without first illuminating and counseling the association.'"