South Africans are angry but not angry enough.

By Mtsubhane (self media writer) | 11 months ago 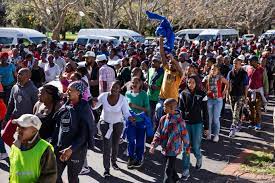 CAPE TOWN, SOUTH AFRICA – Hundreds of Capetonians protested outside the municipal centre over the weekend to protest rising power rates, part of a growing campaign that began with the city's latest price spike in July.

On Saturday, members of the Cape Coloured Congress (CCC), along with civic organization Stop COCT and activist group Electricity Prices Must Fall, met with the objective of getting the City to lower "predatory taxes" that were driving high tariffs, according to them.

While the organizations claimed that no one from the city came out to collect their memorandums, the city responded in a statement that it does everything it can to maintain tariffs as low as possible to pay the expense of providing services.

“The City is neglecting our neighborhoods, we are suffering, and the power rates are killing us,” CCC regional organizer Faye Ali Adams said. Our people continue to be forced to live in misery and suffering, and the City's exorbitant power prices exploit them. Eskom has hiked its prices by 17%. This does not justify the City's addition of R0.29c to the National Energy Regulator of South Africa's (Nersa) authorized price increases.”

The party demanded that the price per unit be decreased, that no deductions be taken from homes who set up payment plans, and that the Lifeline User Block 1 consumption be extended to 600 kwh.

“We also want to know for what services the R0.29c per unit increase is being used. “We seek to know what the deficit would be, if any, if the aforesaid modifications were implemented,” the CCC wrote in its memorandum.

Sandra Dickson, the founder of Stop COCT, stated that they would not stop until they saw change.

“Hundreds of people showed up, but the City never showed up. If they don't listen to us, how can they expect us to listen to them? Why are they charging an extra 29 cents on top of what the energy regulator has approved? No other metros or Eskom overrides Nersa's permitted rates; Eskom is cheaper in Eskom-supplied areas.”

The city maintained that their lowest tariff was the most affordable among the metros.

“The percentage of the energy and water rates that is fixed is included in the overall tariffs. This is true not only in Cape Town but throughout the country, since it ensures that income remains consistent regardless of how much or how little is utilized. The Lifeline rate is used by 27,4 percent of the City's average residential customer base, or 163 335 people. According to the city, this is one of the highest proportions of households getting assistance for any metro in South Africa.

Finance member of the Mayco Neilson, Ian In determining tariff charges, a number of criteria are taken into consideration.

"Reducing the price (or not increasing it as much) for one client type has a knock-on effect for another customer category, and these consequences must be addressed as well."

South Africans are sinking in paying electricity and many household are suffering, what other option do citizen have accepts going to the street and show their grievance.

Content created and supplied by: Mtsubhane (via Opera News )