By Moonlight_News (self media writer) | 1 year ago 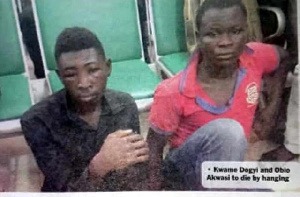 Kwame Dogyi and Obio Akwasi have both been sentenced to death by hanging in their respective cases.

In July 2018, the Tamale High Court in the Northern Region sentenced two students to death by hanging for the murder of Ebenezer Ocran, 65, who served as the head pastor of the End Time Bible Believers Fellowship in Tamale.

On November 10, 2017, the two accused persons, Kwame Dogyi and Obio Akwasi, broke into the home of Pastor Ocran and stabbed him in the chest with a knife before smashing his head with a pestle, killing him in the process.

Some of his belongings, including a Toyota Highlander vehicle, were taken by the robbers.

When Kwame Dogyi and Obio Akwasi were apprehended, they admitted to killing the man of God in his own home.

A pastor was killed in a robbery attack 10 months ago, and two students, Kwame Dogyi and Obio Akwasi, were sentenced to death by hanging by the Tamale High Court in the Northern region.

Amnesty International, an international human rights organization, is expected to express increased opposition to the sentence.

Dogyi Kwame and Obio Akwasi are cousins who are both 21 years old and students at Tamale Technical University, according to Mr. Quddus Salia, the regional state attorney who oversaw the prosecution.

After attacking and killing Ebenezer Ocran, 65, head pastor of the End Time Bible Believers Fellowship in Tamale, they were apprehended in November 2017 at his residence in Kumbuyili, a remote community on the Tamale-Kumbungu road.

According to him, on the 10th of November 2017, at approximately 12noon, the convicts forced their way into the deceased's room and murdered him by stabbing him in the chest with a knife and also fractured his skull with a pestle. Following the incident, they stole a Toyota Highlander that belonged to the deceased and fled.

Dogyi Kwame, he continued, then drove the vehicle to the Tamale Industrial Area, where he handed it over to a sprayer, asking him to sell it for as little as 10,000 Ghana cedis.

Police were called when the sprayer displayed unusual behavior, prompting them to search for and apprehend Dogyi Kwame. When Dogyi Kwame went to the Police Station to visit the former, he identified Obio Akwasi as his accomplice, and the latter was taken into custody.

In their police statements, both convicts admitted to killing the deceased, and they were subsequently charged with Conspiracy and Murder.

A district court in the regional capital ordered them to appear in person at the High Court on April 11, six months after their arrest. Before sending the two to the High Court for trial, the District court judge slammed them as "a disgrace to their parents and school" and said they "didn't deserve to live" because of their "mindset."

The prosecutor stated that the case took only two months to complete and that nine witnesses testified in court against the convicts, who were unable to provide even a single witness to testify on their behalf during the trial.

Qudus stated that, despite the fact that they admitted to the crime in their police statements, they pleaded not guilty at trial.

However, after a jury found the two students guilty of the charges and returned verdicts of guilty on both counts, the presiding judge, Mr. Justice Edward Apenkwah, sentenced them to death by hanging.

Dogyi Kwame, one of the convicts, lived in the same house as the murdered pastor and is suspected of being the mastermind behind the robbery attack.

He was writing a sermon for delivery to his congregation that evening, the prosecutor revealed, with the theme "SHOW ME THE DEVINE LOVE IN YOU" at the time of his death, according to the prosecutor.

According to the prosecutor, the written sermon was presented in court by the prosecution.

On July 12, 2018, a court sentenced a 35-year-old man to death by hanging after he was found guilty of stabbing to death his wife's little sister during a violent rape struggle in the Bole Bamboi district five years ago.

Following the conviction, the state attorney told Starr News that more than five suspects were still waiting to be executed on death row.

Amnesty International condemned the sentence as "crude and unfortunate" and urged Ghanaian authorities to "put an end to the practice of hanging Ghanaians to death."

'This what Pretoria woke up to. See pictures.

PAINFUL || Female Police Officer Killed Her Boyfriend After She Found This On His Pants, RIP

5 months after KZN floods, See what is happening to 27 dead bodies

Another couple was found murdered in their farm at Mpumalanga. Read for more details.