Clover items are being removed from store shelves by striking workers.

By Yaya_hairstylist (self media writer) | 5 months ago

On Tuesday, about 70 Clover strikers marched through Johannesburg's central business district, demanding for a boycott of the company's products. The employees marched from the headquarters of the Commission for Conciliation, Mediation, and Arbitration (CCMA) in Marshalltown to the city center, many of whom are members of the Food and Allied Workers' Union (FAWU) or the General Industrial Workers Union of South Africa (GIWUSA). They raided supermarkets, removing Clover goods off shelves and placing them in shopping carts.

"We want consumers to avoid buying Clover products until the corporation complies with our requests," stated GIWUSA shop steward Martin Ledwaba.Clover employees are on strike for the ninth week, and they claim they will not stop until their demands are granted. They are asking that the firm halt any additional layoffs and rehire all employees. They also want Clover to be self-contained from the Israeli corporation Central Bottling Company (CBC), which owns the company through the Milco SA partnership.

Workers reached a deal with Clover at the CCMA last week that delayed bonuses would be paid by Friday, January 14th. However, many employees claimed they had not been paid in full."We're perplexed because this is our 13th check, and we were expecting to be paid the same amount as our wage, but that hasn't happened. As an R12,000 earner, I expect to be paid R12,000, not the R400 they deposited "Justice Mokoting, who works at the Clover factory in City Deep, echoed this sentiment.

Security officers tried to stop the workers from entering Shoprite in Marshalltown when they arrived, but they were outmanned.

"We're not here to pilfer; all we want to do is get the Clover items off the shelf," one employee told a security guard.Workers inside the store loaded trolleys with Clover products, leaving "Boycott Clover Products" brochures in some of the carts. As they marched through town, the employees also gave out brochures to shoppers and passers-by.

The workers' resistance to Clover's "major reorganization," which includes a move from nine-hour shifts to 12-hour shifts, making labor mandatory on Sundays and public holidays, and a 20 percent compensation drop, is cited among the reasons for the strike in the booklet.

Fearing that their products might be stolen and their stores vandalized, some retailers closed their doors. Tensions erupted briefly when workers at the Park Central Shopping Centre attempted to break into the Boxer Superstore.When the workers approached, an elderly shopper who did not want to be identified said she was terrified. "I had no idea what was going on. I was on the verge of dropping the goods I was holding "she stated She was permitted to exit the store after paying for her purchases.

The workers returned to the CCMA offices around 14:00, where their wrongful dismissal complaint was heard. GIWUSA national organiser Charles Phahla promised workers outside the offices that he would update them on the case's development the next day. 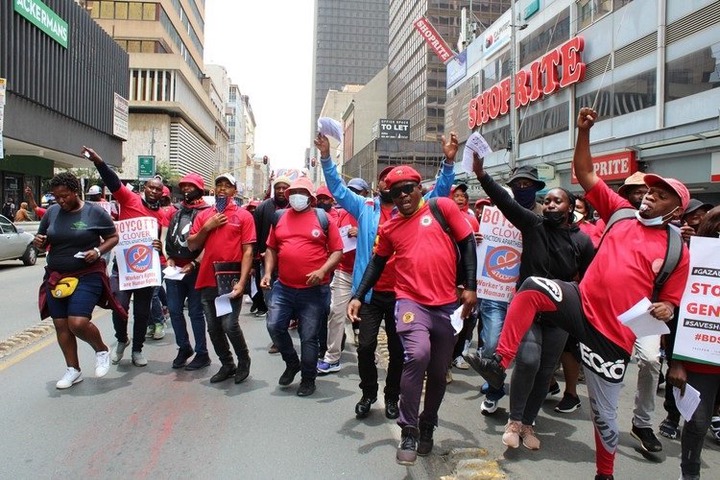 He added that the unions would approach the CCMA at a later date to address issues with bonus payments that workers had raised.At the time of publication, Clover management had not responded to GroundUp's questions. The company warned last week that trading circumstances were difficult due to slow economic growth, increased prices, and low consumer spending. These demands had been exacerbated with Covid.

"A complete strategic evaluation of all parts of Clover's business was conducted as a result of these factors, leading to the difficult decision to reorganize." Clover said it had looked into "all available avenues" to avoid layoffs.Meanwhile, South African Federation of Trade Unions (SAFTU) General Secretary Zwelinzima Vavi has called on affiliate unions to support GIWUSA and FAWU as they intensify the strike. During a media briefing in Johannesburg on Monday, he said SAFTU would hold a working class movement meeting to "look at solidarity plans and elaborate a further programme" on Wednesday.