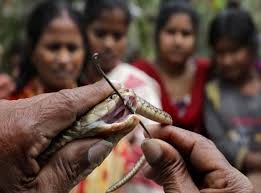 An Indian snake handler demonstrates how to handle a cobra to members of the community during an awareness program.

A man from the southern Indian state of Kerala was found guilty of killing his 25-year-old wife with a deadly cobra last year, and he was sentenced to death.

On Monday, an extra sessions court in the state's Kollam district found the accused, who has only been identified as Sooraj, guilty of first-degree murder.

Over the course of several months, the guy allegedly "hired" two snakes from a snake catcher and unleashed them on his wife, who was only known as Uthra on two separate occasions.

Uthra suffered injuries for the first time in March 2020 when she was bitten by a viper while visiting her husband's house in Adoor town, which is located in the Pathanamthitta district.

Unknown to her family, Uthra was discovered dead in her own home in Anchal town, Kollam district, on May 7. Her death was first determined to have been caused by a snakebite, according to preliminary investigations.

Following Uthra's death, her family filed a police complaint, believing that she had been wrongfully killed. The family alleged that Uthra had been subjected to harassment by the groom's family as a result of dowry payments made to the bride.

Sooraj was eventually apprehended on suspicion of murdering his wife, and his parents and sister were detained and accused with domestic violence.

After his arrest, the accused confessed to the incident in July, claiming that he had sedated Uthra with sleeping medications and then released a cobra to attack her while she was unconscious.

According to the authorities, the accused painstakingly planned the crime and had released both the snake and the cobra to murder his wife.

He had made certain that the viper attacked Uthra in March. She had been bedridden for 52 days as a result of the snakebite, and as a result, she was compelled to get plastic surgery.

When she came home in May, Sooraj released the cobra at Uthra's residence, which bit and killed her just a few days after she had gotten well.

The criminal branch conducted a postmortem on the snake and a DNA analysis of the snake over the course of the investigation. An additional "dummy" test was performed by the police in September 2021, which was intended to reproduce the crime scene.

According to the authorities, money is suspected to have been the driving force behind the crime. Sooraj was dissatisfied with his marriage, despite the fact that he had gotten some money and gold as a wedding gift.

The accused, according to the police, never displayed any signs of guilt throughout the duration of the trial.

"We consider Sooraj to be a seasoned criminal who is completely innocent. He never acknowledged to anything other than what we had supplied as proof. A police superintendent, S Harisankar, was quoted by The News Minute as saying, "He gave comments in a deliberate manner."

Four provisions of the Indian Penal Code, including murder and causing bodily harm to get property, were cited as grounds for his conviction by the court. On the 13th of October, the sentence will be handed down.

Sooraj was sentenced to death on Monday after a hearing in which the prosecutor asked the magistrate to consider this to be a "rarest of rare" crime and called for the death penalty to be handed down.