By KatlegoTau (self media writer) | 6 months ago

A few days ago, I encouraged people to read for themselves before engaging in debates about contentious matters of national importance. Because of the national debate which it has garnered, I encourage people to read the Constitutional Court's judgment in the matter of former President Zuma. The decision of the Constitutional Court has, perhaps unsurprisingly, become entangled in current political debates which, quite frankly, have nothing to do with it.

It is important, however, that we strike through the political spectacle of the day, and assess the merits of the judgment with untainted spectacles. I say this while mindful that a surgical distinction between law and politics is a futile endeavor.

Indeed, in 2006, the then Chief Justice, Pius Langa, wrote powerfully about the impossibility of clearly delineating between law and politics. He said:

"There is no longer place for assertions that the law can be kept isolated from politics. While they are not the same, they are inherently and necessarily linked."

It is true that law and politics are impossible to separate. It is equally true, however, that law is NOT politics, as the then Chief Justice acknowledged. Too often in South Africa, straight-forward legal questions are turned into big political questions, with the effect that judicial decisions are critiqued not for what they are, but for what those who have reframed them in political terms brand them.

Of course, this strategy is often designed to confuse masses of people into believing that judicial decisions are part of some big political ploy against those who enjoy popular support. It is important, however, perhaps now more than ever, to separate the fog from the smoke. We must assess judicial decisions for their legal cogency, for they are, first and foremost, legal instruments, and their correctness must thus be assessed primarily for their legal merits. We do this best when we review judicial decisions for what they themselves actually say, as opposed to what others say about them. 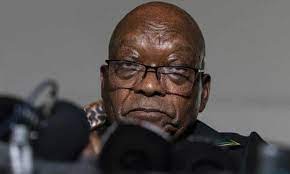 Zuma was in contempt, and that his conduct was worthy of censure and punishment.

Reading the judgment will also reveal that a number of lies have been conjured up about the judgment of the majority of the Constitutional Court by those who do not agree with the outcome. I have no problem with people disagreeing with the majority judgment, but that disagreement cannot be founded on lies about what the judge said or did. I wish to highlight two prominent lies which I have seen circulating about the majority judgment. I focus on these two lies because, regrettably, even trained lawyers have fallen into the trap of peddling them.

The first lie is that the Constitutional Court detained Mr. Zuma "without a trial". The second lie is based on paragraph 29 of the judgment, where the majority said that it was "in the interests of justice to depart from ordinary procedures". The essence of these two lies is that the majority of the Constitutional Court somehow departed from established legal principles, and created "new law" to punish Mr. Zuma. Let me address both these lies in turn.

1. The lie that Mr. Zuma is detained without a trial

Before quashing this lie, it is useful to answer this basic question: what is a trial? In simple terms, a trial is the ventilation and examination of a case before a court in a fair hearing, through the application of the law and the assessment of evidence, in order to arrive at a legal outcome. It is common cause that Mr. Zuma's case was heard by 9 Judges of the Constitutional Court. It will be recalled that the Court went the extra mile in accommodating Mr. Zuma, precisely to ensure that he participated in the proceedings. The Court was in fact widely criticized as being too lenient on him. But at each opportunity granted by the Court to hear him, Mr. Zuma gave the Court the middle finger and maintained that he would not participate in the proceedings. Instead, he continued to launch more public attacks against the Court. He now belatedly avers that this was due to poor legal advice. Well, it is regrettable if Mr. Zuma was indeed improperly advised. The fact remains, however, that there was nothing the Court could have done to force him to participate in the proceedings. His election not to participate does not establish that he did not have a trial. He did. He just chose (on the basis of poor legal advice or otherwise) not to participate in it. In the face of Mr. Zuma squandering multiple opportunities to make his case, there was nothing more which the Court could have done to secure his participation in the proceedings.

To their credit, however, what seems clear to me is that what those who say Mr. Zuma was detained without a trial appear to have in mind is that he ought to have been afforded a full criminal trial. The essence of their argument is therefore not that Mr. Zuma was not afforded a trial. It is that his trial ought to have been different from the one he was given. They say that the matter could have been referred to a trial court, and thereafter conducted in the manner normally afforded to accused persons in criminal proceedings.

The flaw in this argument is obvious, and a reading of the majority judgment of the Constitutional Court puts the argument to bed. It is an established principle of our law that a contemnor who is a respondent in civil contempt proceedings is not an accused person entitled to have her or his case conducted in the manner applicable to accused persons in criminal proceedings. This principle of law has long been part of our law and has been applied in a number of cases by the Constitutional Court, the Supreme Court of Appeal, and various High Courts. The principle is not a "new law", as some would have us believe.

There are, of course, a number of good reasons why a contemnor is not entitled to the protections which apply to accused persons in criminal proceedings. I cannot set out all of them here, but two are worth highlighting:

a) first, the very basis of civil contempt matters is the existence of a prior court order, which has been disobeyed by the contemnor - a unique feature that normal criminal matters do not ordinarily have. The existence of a prior court order means that the elements of civil contempt are quite simple and easy to establish. All that has to be shown is that: (i) there is a court order; (ii) which has been served or brought to the knowledge of the contemnor; (iii) who has then failed to comply with the order; (iv) in circumstances where the failure to comply is willful. The last element is presumed unless the contemnor shows that her or his non-compliance was in good faith.

These elements are self-evidently basic and do not present the court whose order has been defied with the kind of complex questions that would arise in an ordinary criminal trial. The complex evidentiary hurdles and assessments which often trouble courts in ordinary criminal cases just do not arise in contempt of court matters. It would therefore make little sense to, without more, give contemnors the benefit of the substantive and procedural protections afforded to accused persons in criminal proceedings.

What emerges from all this is that nothing in what the majority of the Constitutional Court did was "new law". The Court applied settled and legally sound principles of law, which are befitting in civil contempt matters. In fact, what would have been "new law" would have been for the Constitutional Court to shy away from deciding the matter, and to refer it to a trial court. That would have amounted to giving Mr. Zuma preferential treatment, and giving him that to which a contemnor is not entitled in law. That takes care of the first lie.

The second lie is even easier to dispel, so let me dispense of it briefly and swiftly.

2. The lie based on the Constitutional Court's "departure from ordinary procedures", as indicated in paragraph 29 of its judgment

Let me state upfront before addressing it that this lie exposes what happens when people screenshot one paragraph of a piece of writing and thus remove it from its context. That is why we must read the entirety of the source ourselves before jumping in support of a distorted narrative. It takes a person just reading a few sentences above paragraph 29 to see that this paragraph does not establish that the Constitutional Court departed from existing law in handling Mr. Zuma's case.

Reading further up reveals this: paragraph 29 appears under the heading "Direct access". It is therefore clear that the question which the Constitutional Court was concerned with within this paragraph was whether it was in the interests of justice to hear the matter "directly". The Court was not deciding the merits of Mr. Zuma's contempt case.

Those familiar with our court system know that matters normally arrive at the doors of the Constitutional Court by way of appeal from lower courts. But the Constitutional Court also has the power to hear matters "directly". It does so when it is in the interests of justice to depart from ordinary appeal processes and to hear the matter as a court of first and last instance. These are principles of law that have existed since the Constitutional Court was formed. They are not "new law" fashioned to apply to Mr. Zuma alone, as some now aver.

You will see from the judgment that the majority of the Constitutional Court gave extensive reasons why it was in the interests of justice for it to hear the matter directly. Given what I have said above about the nature of contempt proceedings, and that it was an order of the Constitutional Court which Mr. Zuma had defied, it is not surprising that the Court considered itself best placed to deal with the matter, to the exclusion of lower courts.

The lies I have dealt with above, as many others which I have not addressed here, are easy to dispel by reading the Constitutional Court's judgment - which speaks for itself. As I said a few days ago, let us read for ourselves lest we be led astray by those who seek our sympathy for the benefit of their own personal causes.