Tires, trash, and stones were scattered all over the M2 highway on Thursday afternoon as Johannesburg metro police members embarked on a strike over a salary increase.

The officers brought traffic to a standstill on the busy highway that connects the N3 to Durban, the N1 to Bloemfontein, the M1 to Midrand, and Main Reef to Soweto.

And the streets of the inner city were extremely congested with no police to help direct the flow of traffic.

This time there was no chaos as the people who usually fire rubber bullets were the ones protesting.

When the protest started around 3 pm on Thursday, metro police members with firearms on their waist, pepper spray, and handcuffs in their possession sang and danced about how hard they work “for peanuts.”

Officers are demanding an R3000 wage increase that was promised to them by the City in 2016.

Lebogang Ndawo, security of JMPD cluster said they have been patient enough talking to the employer about the same issue for years.

“We took this decision to close the highway as the only way to send the message to our employers,” said Lebogang.

The acting City Manager in the city of Johannesburg Brian Maduka told the protesting members that he would sign off their request.

After a long deliberation with the city manager, the union officials and the city broke the negotiations and agreed that the officers would be paid from 1 September this year. 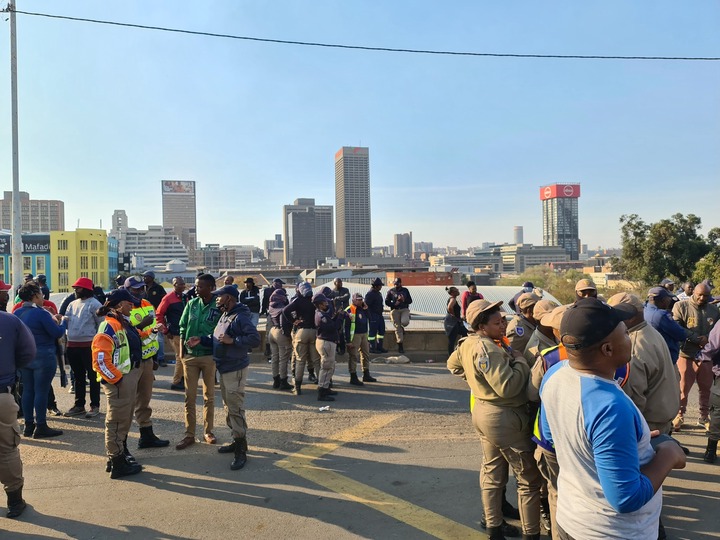 One officer who asked not to be named said there are deeper issues to be addressed in the force. He said an officer who has been working for many years was receiving the same pay as someone who has just graduated from the academy.

JMPD spokesperson Xolani Fihla said this was an administrative issue that is being attended to by the city officials.