By Konaha_Village (self media writer) | 6 months ago

Pretoria - The top of the National Prosecuting Authority (NPA) Investigating Directorate (ID), Advocate Hermione Cronje, finds employment elsewhere without having effectively arraigned a solitary case since the unit's commencement two and half years prior. 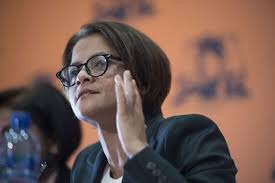 This arose at a media instructions tended to by the National Director of Public Prosecutions (NDPP), Advocate Shamilla Batohi, yesterday following Cronje's renunciation last week. Batohi attempted to portray Cronje's history, saying she established a strong framework for the ID to expand in by gathering a group of experienced specialists and getting the ID its own best in class base camp.

Nonetheless, when found out if Cronje effectively indicted any case, Batohi said: "What is a fruitful arraignment? An effective indictment is charging individuals and taking a case to end. So there is no case that has been finished up yet." Cronje, who surrendered last week, was the establishing top of the ID, which was set up by President Cyril Ramaphosa in April 2019 to zero in on state catch defilement.

Reacting to inquiries from writers about Cronje's history, Batohi said the active ID manager figured out how to enlist 18 cases. Basically 70% of these 18 cases are criminal cases that are as yet being heard in court, while the rest identify with the resource relinquishment common recuperation matters, Batohi said.

She set out to accuse the framework and the criminal suspects supposedly utilizing what she called "strategies" to defer cases, for the National Prosecuting Authority's helpless conviction rate.

"These issues are truly muddled and the miserable reality in the current environment is that blamed people will do all that could be within reach – the supposed "Stalingrad strategy" to guarantee that cases don't continue to certainty and that the State doesn't at any point begin driving the proof on the benefits of the case," Batohi said.

"Be that as it may, we are very much in the know about the procedure and we are checking out engaging investigators to oppose these endeavors. However, toward the day's end it's choices made by judges and justices and there is no way around that. What we can do is to have a solid procedure to have the option to manage these strategies and contend against cases being postponed."

The Pretoria News as of late detailed that Cronje had been blamed for gathering her packs and leaving since she neglected to break cases notwithstanding purportedly blowing nearly R400m on white legal advisors from Cape Town whose command was to deal with high-profile political cases. This is said to have caused strains with her chief, Batohi, after Cronje purportedly mentioned more cash to break the cases.

Cronje's representative Sindisiwe Seboka, who neglected to react to explicit inquiries when drawn nearer by the Pretoria News on Sunday, said yesterday: "The Investigating Directorate's all out financial plan is R106million.

Anyway we have been blamed for burning through R400m on outside counsel, furthermore, we have just burned through R1.6m this monetary year to outer advice and legal specialists."

In any case, Batohi minimized the "pressures" yesterday, saying the connection among her and Cronje was "work in progress". Nonetheless, she inferred that the ID under Cronje at first neglected to dissect cases better, had no unmistakable concentration and tried to handle every single case.

"We were pushing toward that course of having the arrangement technique. It was work in progress. "The ID was beginning to investigate better, understanding that we (NPA) couldn't do everything. In this way, assuming we don't have clear needs and be engaged, it was continually going to be troublesome."

Inquired as to why Cronje was not piece of the media instructions since she was all the while serving her three-month notice, Batohi said the preparation was a commitment between the media and the NPA leader panel.

"This is a commitment with the media and the exco of the NPA thus ought to clarify why advocate Cronje isn't here. "Batohi additionally said that she had at first attempted to convince Cronje to remain to guarantee coherence, yet in the long run needed to yield to the possibility of her clearing office.

"Adv Cronje had communicated an expectation to leave. I did at first attempt to request that she stay in the previous stages, however we arrived at a point where I understood it would be to the greatest advantage of everybody worried that she does leave, and that is the reason I consented to her excursion of office," Batohi said.

Parliament's portfolio panel on equity has called Batohi to confront inquiries on Cronje's takeoff in the National Assembly tomorrow.

She demands there is no emergency inside the NPA.

"The NPA isn't in an emergency and there is no far and wide damage of the ID or any piece of the NPA."

Without diving into subtleties, Batohi said "the erroneous story that her flight is a result of relational relations among me and her truly makes for sensational detailing. " We both have the wellbeing of the country on a fundamental level. Authority advances are typical and frequently solid."

Content created and supplied by: Konaha_Village (via Opera News )