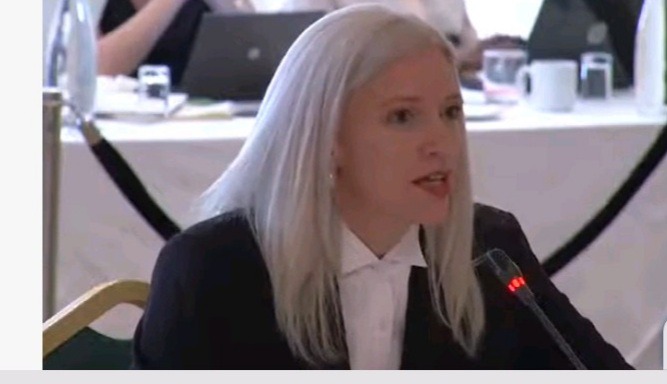 In a letter that was read by Deputy Chief Justice Raymond Zondo, which she sent through email, Magistrate Antolize Lamminga explained that the reason for her not continue with the interviews was because of unfairness with regards to the questions that she was asked during an interview, for the Limpopo Division of High Court Judge position.

She mentioned in the letter that she was unexpectedly asked questions about the long outstanding matter on her roll.

The matter is about the armed robbery case that has been on the her roll for about six years but has never gone on trial even once.

She maintained that she was not informed in time that there would be questions regarding this case, therefore she was not prepared to answer with regard this matter. As she did not have the records of the case with her during the interview.

EFF's Julius Malema as a commissioner at the JSC put it to her that, to keep a matter for such a long time on roll was denying justice to those who deserve it.

She replied on that by saying that, the delays were beyond her control, as they were caused among other things by the accused who kept on changing defence.

The JSC commissioners were very much concerned about this matter being so long on Lamminga's roll, that commissioner Malema further put it to her that she was clearly not coping with duties at her level.

Therefore how could anyone expect her to cope at the higher level. She replied to commissioner Malema by saying that maintaining that she was struggling with her duties was only Malema's opinion, but according to herself she was not. She said she could do as much.

All the above questions were asked for the position of the Limpopo Division of High Court, on Wednesday last week.

When she was supposed to go for another interview on Friday for the Mpumalanga Division of High Court, she felt that the same questions were going to be asked, and felt that it would still be difficult for her to answer properly. Since she would still have no records of the case with her.

Therefore she decided to withdraw from the interview. But Acting Chief Justice Raymond Zondo maintained that, Lamminga was given a choice to state if she was not in a position to answer questions pertaining the said matter.But instead she decided to just withdraw.

According to me, it is of course, right of commissioners to be concerned about the case that has been on roll for about six years.

I would believe that magistrate Antolize Lamminga doesn't qualify for the position. It has been proven beyond doubt. And even she herself is aware of that, hence the withdrawal.

We really need right people for critical positions like these.