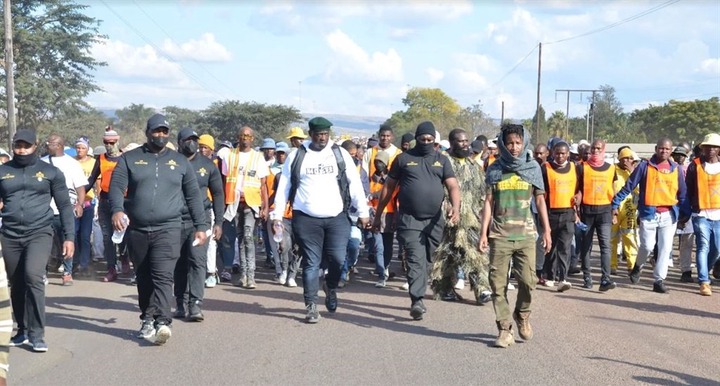 The Public Order Police were compelled to use rubber bullets to disperse the crowd of demonstrators wearing EFF T-Shirts who had gathered outside the Sibanye-Stillwater offices.

A MARCH that was intended to be peaceful ended in complete pandemonium close to the headquarters of the Sibanye-Stillwater mine outside of Rustenburg in North West.

As the N4 Cluster Movement was getting ready to give up their memorandum of demands, war broke out between two different factions.

When they were on their way to the Sibanye-Stillwater mine, members of the N4 Cluster Movement were ambushed by an unknown number of individuals dressed in EFF regalia.

It is speculated that the gang was guarding the mine in some capacity. Stones were thrown back and forth between the two groups. Rubber bullets were shot by the police in an effort to disperse the throng.

Solly Soka, head of the N4 Cluster Movement, said that the march was organized to convey the community's concerns over job disparity at Sibanye-Stillwater.

According to Soka, the Sibanye-Stillwater mine has been unsuccessful in developing the host communities.

He said, "We want employment, possibilities for entrepreneurship, and the development of our abilities."

Marchers blocked the N4 road for the whole of the day, forcing drivers to find alternate ways to get where they needed to go.

The Majakaneng Village served as the starting point for the march earlier that morning.

Thabisile Phumo, the Executive Vice President for Stakeholder Relations at Sibanye-Stillwater, said that the march seemed to be related to issues of employment, recruiting methods, and prospects for local entrepreneurs.

Phumo said that they have official engagement forums with well-known organisations that represent the community.

She said that they meet with these forums on a regular basis and keep them informed about their operations.

"This organization does not meet the qualifications to be a recognized community representation group.

"We work with the government to reduce poverty and unemployment, as well as to strengthen the economy of the areas that are geographically near to our activities."

She said that the assertion made by the group was not substantiated and was wrong.

Brigadier Sabata Mokgwabone, who is the spokesperson for the North West Police, verified that the police used rubber bullets.

bullets in order to keep the public order.

According to Mokgwabone, an official report of public violence has been filed and will be investigated.

The presence of the police is being kept constant throughout the region.