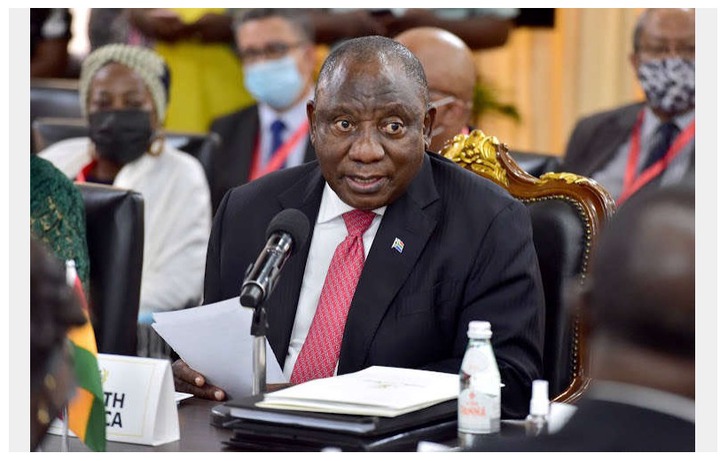 "At the point when the National Coronavirus Command Council meets, I am expecting a report from the undertaking group we set up just as the between the ecclesiastical board of trustees. There should be a report and this necessity to happen rapidly on the grounds that with the rising rush of contaminations, we really want to act rapidly so the bureau can take a choice on this," said Ramaphosa.

Talking on an SAA flight not long after closing respective discussions with Ghana, Ramaphosa said the errand group is intended to be dynamic.

Prior to the pandemic, Ramamphosa on various events told South Africans they would not be constrained to be inoculated. Be that as it may, the expanding number of Covid-19 diseases, the transforming variations, and the droop in the immunization drive have seen government consider the choice which a few nations have made obligatory.

During his new location to the country following the revelation of the Omicron variation, Ramaphosa reported he had named an errand to embrace an expansive consultative interaction on making antibodies compulsory.

Gotten some information about the undertaking group, on Sunday evening Ramaphosa said the interaction might be eased back by the power of counsels and conversing with areas of society.

Ramaphosa said he was "ready to draw in with a portion of those voting demographics".

"We live in a nation where individuals have solid perspectives, for and against, and my assignment as a pioneer is to push everybody a similar way.

"Through the exchange I said we ought to have, ideally we can get everybody to move toward a path where we will be generally mindful with regards to the risks of not being inoculated.

"Immunization is as yet our most grounded weapon against Covid-19 and I accept we should allow our kin an opportunity so they can see the risks of not being inoculated."

Considering his visit to Ghana, which was important for his four-country visit to West Africa, he said: "it had been best."

"The commitment between ourselves as presidents and our designations were exceptional. They were not the standard flat sort of state conversations.

"There was a great deal of conversation, development, novel thoughts that went to the front and we have had the option to unite our relationship.

"We gave importance and life to the by-country Commission (BNC). At the point when we meet in two years' time again, I figure we will be ready to take the relationship to another level.

"The clincher was getting the business board to be a base of the BNC. Each time we meet we will have business being a limb as well as a piece of the conversation. They will actually want to raise issues of concern, similar to issues about a helpful environment to carry on with work.

"As [Ghana's] President Nana Akufo-Addo said, we should set the arrangement system so they can lead the business. Government ought not to be occupied with business."

Ramaphosa said organizations ought to be left to "carry on with work, create gains and settle charges. We should establish the environment."

On a lighter note, Ramphosa said he had appreciated jollof rice in the country.

"I have partaken in the rice here, totally different from our own, and I need to see jollof rice in SA."

When requested to pick which he delighted in additional between the Nigerian and Ghanaian Jollof, he said: "The Nigerian one. I murmured something to my significant other and she said 'bring some home' yet I have been a terrible kid in such a manner. I have not purchased any."