She's Been Living With HIV For 13 Years, See Inspirational Story.

"Once you are cool it is easier to go out in public and talk about having HIV. ”

This is according to Nomfundo Ndlovu (39), of Ofafa, Ixopo, who has been diagnosed with the virus for 13 years. 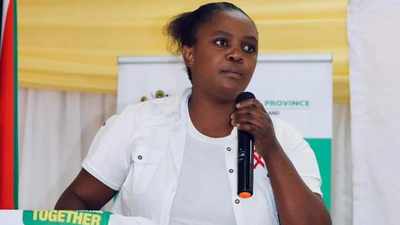 Ms Ndlovu raises awareness about HIV and encourages people to get tested for it, to take antiretroviral treatment if they find out they have it.

SHe said when she went for the test he suspected he had it because he had a stomach ache which had not lasted for a long time.

"Like everyone else, I first bought medicine at the pharmacy, went to the doctor but to no avail. I realized it was better and went to the clinic, the results really confirmed.

SHe said the pills did not give her problem and her s family supported her.

"By the end of the year I had admitted that I was HIV positive and at the clinic the nurses loved me, and they used to talk to me when we were together. "I said I was broken because I thought they would find out I was pregnant. I would come if I only fetched pills, I hid them so they wouldn't see I was pregnant. I gave birth at another hospital and they saw I was pregnant," she said.

SHe said what made her so brave was that she knew at home the information did not come in the right way.

The woman says that in a community where mothers who know she has HIV often send their babies to her if they feel they have HIV symptoms.

"We had to talk in secret because some people did not know I was living with the virus. It was until I decided to just talk in the meetings and in public because I was tired of telling people about the breakup. At the moment the virus is no longer detectable in the blood but this does not mean that I have to stop my treatment because the virus is present and undetectable.