Smoking water pipes (also known as hookahs, hubbly bubbly, narghiles, shisha and goza) is becoming an increasingly popular pastime with young people, because it is seen as a fun way to socialise with friends.

It is also viewed as less harmful than smoking cigarettes. Nothing could be further from the truth! 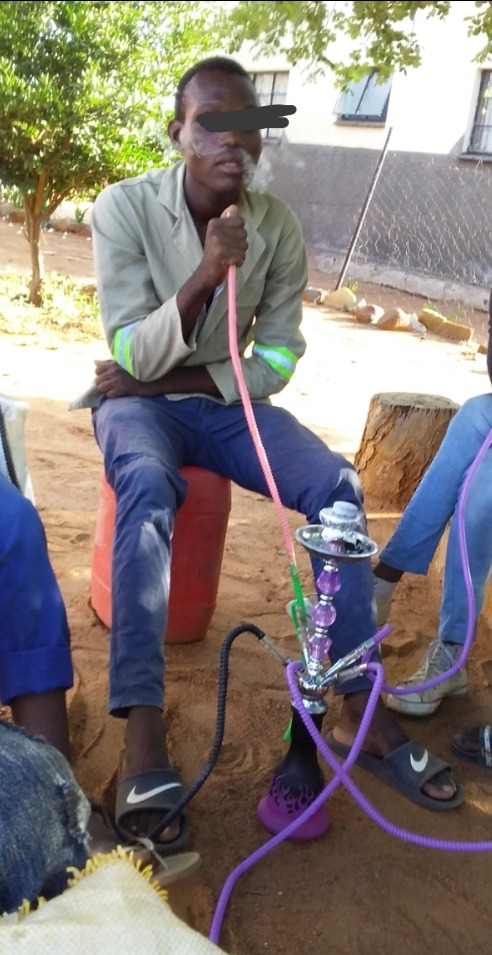 The names may sound cool, but they are not. They are dangerous and addictive killers…

CANSA is especially concerned regarding the increased use of water pipes, hubbly bubbly or hookah-smoking among young people, as their lungs are still growing and smoking can cause permanent damage. 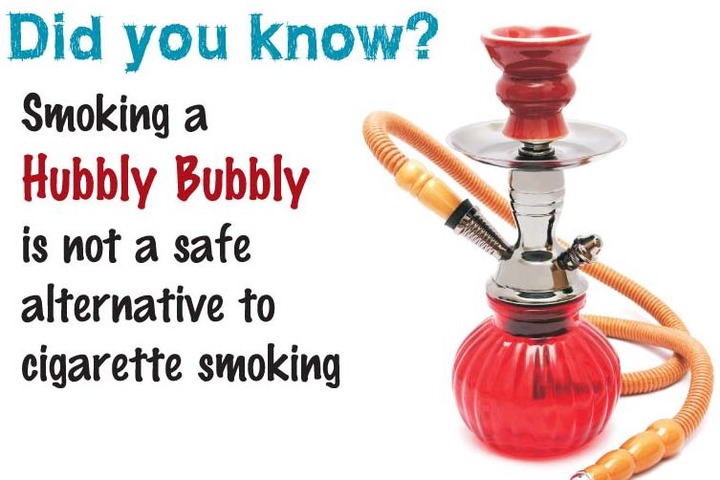 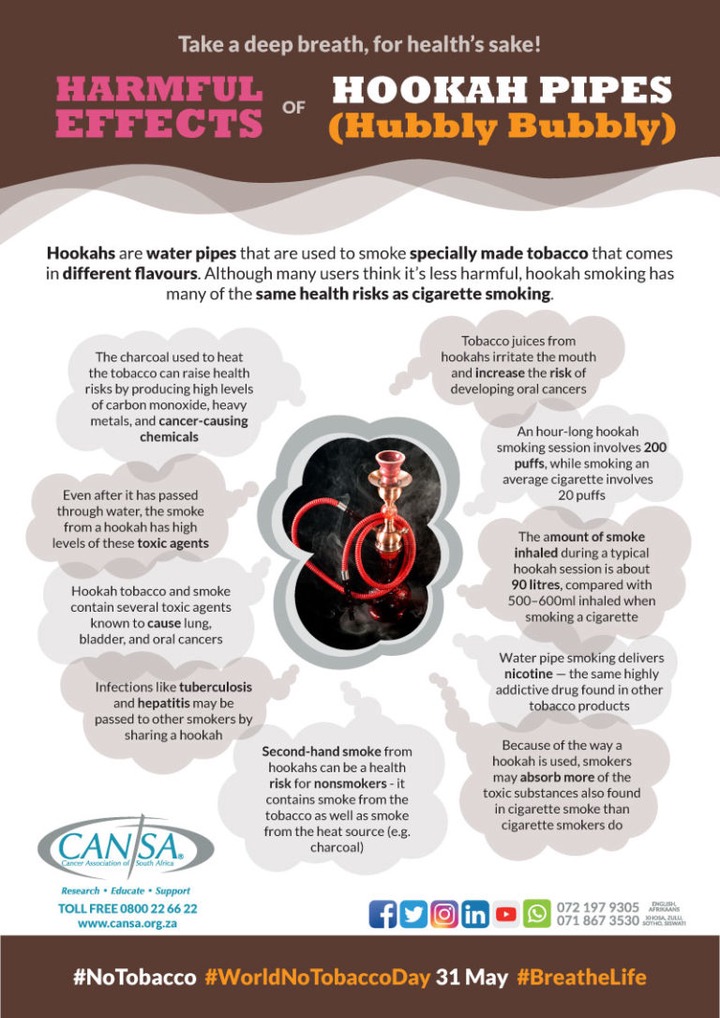 Myth 2: Hubbly (hookah) is not addictive

Water pipe smokers, and second-hand smokers exposed to them, are at risk of the same kinds of diseases that are caused by cigarette smoking, including cancer, heart and respiratory diseases, as well as adverse effects during pregnancy.

According to the World Health Organization (WHO), contrary to the popular belief that the smoke of a water pipe has little or no side effects and is less harmful than cigarette smoking, the smoke that emerges from a water pipe contains several toxins known to cause lung cancer, heart disease and other diseases.

In addition, the charcoal burned in the pipes often produces its own toxins, including high levels of carbon monoxide and cancer-causing chemicals.

It delivers the addictive drug nicotine and, as is the case with other tobacco products, more frequent use is likely to result in addiction.

WHO has found that a water pipe smoking session, which typically lasts between 20 to 80 minutes, may expose the smoker to more smoke (and its harmful effects) over a longer period of time than when smoking a cigarette.

In contrast, a water pipe smoker may take 50 to 200 puffs a session, which may range from 0.15 to one litre of smoke per puff.

The water pipe smoker may therefore inhale as much smoke during one session as a cigarette smoker would inhale consuming 100 or more cigarettes.

The smoking of water pipes in public areas has been banned outright in several areas around the world.

This includes the Middle Eastern and Asian countries, where smoking the pipe is an ancient tradition and a popular modern social past-time and tourist attraction.

Many countries in North America and Europe are currently developing legislation to ban the smoking of water pipe because of the serious health risks it poses to users, as well as passive users exposed to second-hand smoke.

It is of great concern that many young children & teens are also smoking Hubbly (hookah). This is causing damage to their developing lungs and setting them up for a lifetime of addiction. It is also illegal.

In South Africa, water pipes and their related tobacco products, fall under the definition of ‘tobacco product’ as indicated in the Tobacco Products Control Amendment Act (2007). This means that its use and sale have to comply with the regulations that apply to a tobacco product in the country.

This includes the prohibition of the sale of hookahs and their products to anyone under the age of eighteen.

History of the Waterpipe

The water pipe was invented in India during the 16th century by a physician named Hakim Abul Fath, who suggested that smoke “should be passed through a small receptacle of water so that it would be rendered harmless.”

Contrary to this ancient lore and today’s popular belief, the smoke that emerges from a water pipe contains numerous toxins known to cause lung cancer, heart disease and other diseases. While water does absorb some of the nicotine, water pipe smokers can be exposed to sufficient doses of this drug to cause addiction.

Traditionally, water pipes have been used to smoke tobacco and other substances by the indigenous people Africa and Asia during the past four centuries. Water pipes have different names in various parts of the world: “Narghile” in the east Mediterranean countries, including Turkey & Syria; “Shisha” & “Goza” in Egypt & some North African countries and “Hookah” in India.

Today, the highest rates of water pipe smoking occur in the North African, Eastern Mediterranean and South East Asian regions. Since the 1990’s, water pipe smoking has spread among new populations and demographics to include college students and young people in the United States, Brazil, Western European and Southern African countries.

The popularity of water pipe smoking appears to be stimulated by the social nature of the activity, as well as the unfounded assumptions of relative safety compared to cigarettes.

In reality, a water pipe smoking session may expose the smoker to more smoke over a longer period of time than occurs when smoking a cigarette.

Q: How does the water pipe work?

A: There are regional and cultural differences in some water pipe design features. But, all water pipes contain water through which smoke passes prior to reaching the smoker:

This conduit is submerged in the water that half-fills the water bowl.The hose is not submerged, exits from the water bowl’s top, and ends with a mouthpiece, from which the smoker inhales

The tobacco that is placed into the head is very moist (& often sweetened & flavoured) : it does not burn in a self-sustaining manner

Thus, charcoal is placed atop the tobacco–filled head (often separated from the tobacco by perforated aluminium foil)

When the head is loaded, & the charcoal lit, a smoker inhales through the hose, creating a vacuum above the water, & drawing air through the body & over the tobacco and charcoal

Having passed over the charcoal, the heated air, which now also contains charcoal combustion products, passes through the tobacco, and the mainstream smoke aerosol is produced

As an alternative, smokers may opt for commercially available quick lighting charcoal briquettes

Q: What is a hubbly bubbly?

A: A hubbly bubbly – also called a hub, hookah, water pipe, narghile, shisha or goza – is an instrument for smoking tobacco, which is often flavoured. It consists of a base container, usually made of glass, attached to one or many smoking tubes. The tobacco smoke is cooled by passing it through water in the container prior to inhaling it.

A: No, the water doesn’t clean the smoke. Water pipe and cigarette smoke both contain poisons including nicotine, tar, carbon monoxide, arsenic and lead, among many others. Arsenic is used as a rat poison, and carbon monoxide is a deadly gas also found in motor car exhaust. Lead is a neurotoxin, meaning it can damage the nervous system.

Q: Don’t you get less nicotine from a water pipe than a cigarette?

A: The water does absorb some of the nicotine, but water pipe smokers can nonetheless be exposed to sufficient amounts to cause addiction. A water pipe smoker can take between 50 and 200 puffs in a single session (which could take 20 and 80 minutes) while a cigarette smoker takes about 10 puffs a cigarette. In other words, there is the potential for a water pipe smoker to take in as much nicotine by smoking one water pipe as you can by smoking 10 cigarettes. The ‘tar’ in tobacco smoke also causes cancer. The smoke produced in a typical water pipe smoking session can contain about 36 times more tar and about eight times more carbon monoxide, than the smoke from a single cigarette.

A: The water pipe can be just as addictive than a cigarette, because users are exposed to addictive quantities nicotine. Some water pipe smokers show the signs of addiction, that is, they crave a smoke, and they struggle to quit the habit and experience withdrawal symptoms when not doing so.

Q: Why are water pipes so appealing to young people?

A: The sweet ﬂavour and pleasant smell makes it easier to inhale the smoke without coughing. Also, smoking water pipe is a social and satisfyingly ritualistic activity for many, further encouraged by the prevailing myth that it’s harmless and doesn’t involve ‘proper drugs’.

Q: What are the long-term health effects of water pipe smoking?

A: Scientists are just starting to investigate all the negative impacts associated with the water pipe, but given its similarity to cigarette smoke, it is likely that many tobacco-related diseases will be linked to water pipe use. This includes damaging the lungs, making it painful or difficult to breathe. It may lead to cancer of the mouth, lungs and bladder, and even cause heart disease. Sharing a water pipe also means you can get germs from other people: the bacteria that cause tuberculosis, as well as the virus that causes herpes, can be passed on to you by sharing a water pipe.

Q: Even if I don’t do it myself, is it bad to be in a room where people are smoking a water pipe?

Q: If a pregnant woman smokes a water pipe can she harm her baby?

A: Yes. The carbon monoxide and other poisons will pass from the mother’s blood to the unborn baby and can stunt the growth of the foetus.

Q: Is there a safe level of smoking a water pipe?

A: There is no safe level of tobacco use, in whatever form that can be considered safe. The more the use, the greater the health risks