Doctors said my son's internal organs are damaged because of the poison; father breaks down in tears

By Real_Gist-Don (self media writer) | 24 days ago

Doctors have determined that my son's internal organs have been damaged as a result of the poison; my father breaks down in tears as they tell me this. 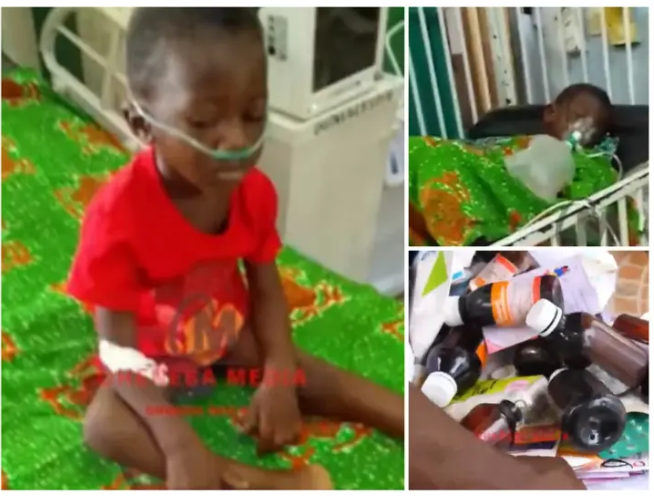 For almost a year now, 3 year old Ephraim Prah has been fighting for his life in the hospital after consuming some sort of toxic substance. The unfortunate youngster had miraculously survived this life-threatening scenario, despite the fact that medical professionals were skeptical that he would make it this far.

Even in his current condition, there is considerable ambiguity as to whether or not his organs will be able to perform as they should. He experienced a number of unpleasant events in the days following his discharge from the hospital in his first week home.

Mr Prah's father was advised to prepare himself for the worst case scenario. In addition to being discharged from the hospital, the man had been put on life support, which doctors said would be necessary until he is fully capable of breathing independently again.

However, the father believes that their chances of seeing their son fully recovered are diminishing. Mr Prah revealed that they have spent all of their savings on drugs since February 2020, and that they have no plans to stop.

His hand reached into the medicine cabinet and pulled out an entire jar of drugs that little Ephraim had been taking since. After seeing these prescription wraps and bottles, you would wonder how this poor kid has managed to live this awful condition for the previous year.

According to the father, an endoscopic test revealed that all of the internal organs have been damaged and are at the end of their usefulness in the human body. Unless something extraordinary happened to restore his son's health, he was concerned that he might pass away shortly.

When asked who he suspected of poisoning his children, Mr Prah stated that little Ephraim returned home from school on that fateful day in February 2020 with food and oil marks on his palms and clothing. He stated that the poor youngster had a rash and had become feeble within minutes of being attacked.

"The toxic material had already begun to work its magic," he exclaimed.

"He can only manage to swallow little droplets of food when he is hungry," the father said, providing an update on the condition of young Ephraim at the time of the interview.

He has to be healthy and robust before we can proceed with minor surgery to correct the tissue damage that has already occurred. However, as we speak, he becomes dizzy after only a little distance of walking."

Mr Prah went on to say that the family has remained devout, which he believes has contributed to the survival of little Ephraim.

His doctors are actually amazed that he is still alive today. At first, they were apprehensive about telling me the news.

Due to the issue, my wife came dangerously close to miscarrying our child. Our situation has not been that straightforward lately."