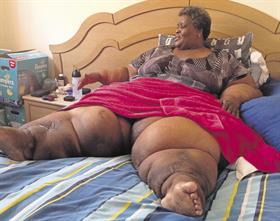 A 56-year-elderly person, whose body has been growing at a quick rate, leaving her debilitated and disabled, has argued for help.

Nomzamo Bona, from Luzuko Park, in Philippi, experienced a wellbeing difficulty years prior when she "expanded", with her body oozing a water like substance, and she is presently unfit to walk.

Bona said she doesn't have the foggiest idea what made her body extend the manner in which it has, yet she realizes that she has diabetes and hypertension.

Lying on her wet sleeping pad in her lounge area, Bona said she was conceded to the Groote Schuur Clinic on September 22, in the wake of having fallen at home, and was released the next day – despite the fact that she didn't feel prepared to get back.

She blamed the clinic for abuse, asserting every one of the medical attendants would not like to contact her.

"They said I was smelling. I even asked a dark medical caretaker for what good reason she was dealing with another person of color like that. I let them know I have privileges as well. In any case, I was disregarded. I was left damaged," she said.

"She went to the clinic after she tumbled from her bed at home. Every one of the claims of abuse made are bogus," said Jacobs.

Jacobs said, when she showed up, they obliged her in their spotless Injury Unit, in a private room.

After she was analyzed by the specialists, it was discovered that she had no injury and that was conveyed to her. Be that as it may, she would not like to leave the emergency clinic after she was inspected.

"There was nothing more that we, as an emergency clinic, could accomplish for her. She was seen by every one of the specialists, social laborers, and surprisingly a therapist in the ward, to help her with any of her necessities," said Jacobs.

He said, while she was in the ward, she was taken care of at all eating times like some other patient in the ward. The medical clinic even masterminded local area administrations to complete three visits to her home each week.

Bona questioned claims that she was being seen by local area administrations, saying after she was released "nobody from the clinic visited, all things being equal, paramedics left me in the lounge area, asserting it was not their obligation to place me in my room."

ANC commonplace Health representative Rachel Windvogel said she was disheartened by the narrative of the patient, as nobody had the right to encounter what she has gone through.

Windvogel said Segment 27 of the Constitution is evident that each individual has the option to approach medical care administrations and that no individual might be declined crisis therapy.

"It isn't the initial occasion when charges of helpless treatment of patients and carelessness have been accounted for against general wellbeing offices in the Western Cape," she said.

She said she was circling back to the office and the MEC, to perceive how the patient could be helped.

"I will settle on decisions for a pressing examination of this," said Windvogel.