Khayelitsha now has a rooftop champagne bar to go with its boutique restaurant.

By WHITEMANCONFESSION (self media writer) | 4 months ago 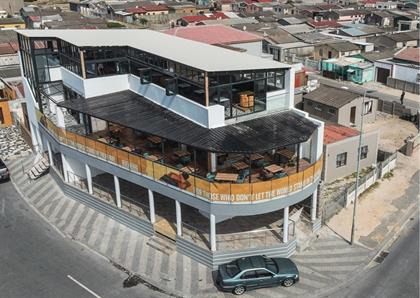 The Milk Restaurant, in Khayelitsha, has reopened, this time with a champagne bar and lounge setting on the rooftop terrace.

The three-story structure is notable for housing Khayelitsha's first boutique restaurant, which opened in 1997.

It is just a short walk away from The Spade, a new boutique hotel and spa in Khayelitsha, South Africa.

More articles may be found at www.BusinessInsider.co.za (South African version).

The Milk Restaurant, a multi-story boutique restaurant in Khayelitsha that had been closed due to the pandemic, has reopened with a new champagne bar on its rooftop, after being closed throughout the outbreak.

Now known as The Milk Restaurant and Champagne Bar, it is about a seven-minute walk away from the newly constructed The Spade Boutique Hotel and Spa, which was formerly located there.

The restaurant and bar, which was developed by Spelo Jalivane, provides clients with the opportunity to relax, drink, and dine all inside the same building, but on various levels.

Jalivane invested his own money in the establishment of the restaurant. Despite the fact that the company had significant growth, there were a number of difficulties that contributed to its eventual demise, according to him.

"I made the mistake of starting the firm too soon. I was in a hurry and wanted to get everything up and running as soon as possible, not realizing the difficulties I would have with the infrastructure. I took for granted the culinary equipment that was necessary, and this had a negative impact on the quality of service provided "Jalivane expressed himself in this way.

Mfundo and Mshayi Mbeki, who own Rands Cape Town, assisted Jalivane in refining the restaurant during the lockdown. Jalivane has now worked with the Mbeki brothers, who own and operate a prominent Khayelitsha café, Rands Cape Town, with whom he has collaborated on a number of projects.

"Lockdown compelled me to remain and stew in my present situation. It saved my life because, as a result of it, I was able to establish a productive working connection with the two prosperous brothers who are also outdoor Mecca Kings "Jalivane shared his thoughts.

Although the ground level used to be the restaurant, it is now a full-time liquor shop with a separate door that leads to the restaurant and champagne bar on the first floor. It has a large assortment of beers, ciders, wines, and hard liquor beverages to choose from, as well.

The restaurant is a good example of this.

In addition to velvet-covered furniture, the interior has been refurbished with more contemporary and attractive finishes.

The Champagne Bar is open 24 hours a day.

The Milk Restaurant and Champagne Bar is located on the ground floor.

The champagne bar, which has a lounge atmosphere, is located on the rooftop, which has a view of the Khayelitsha township.

It specializes in high-end drinks such as champagne, cognac, and whiskey, among others. Its lounge environment contains loungers that can accommodate parties of four to ten people.

Every daily, we'll send you an email with the best of our site.