By eXclusivenews (self media writer) | 19 days ago 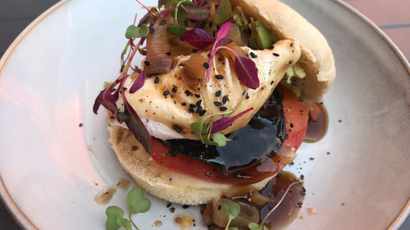 ON a new excursion to the Midlands, I found The Break Room, another sound living and super veggie lover well disposed restaurant and café, squarely in the core of the town.

What's more, when you put something many refer to as The Famous Eggslut on the menu, who could oppose that?

Settled in a cutting edge block working, with tables spilling onto a deck, it's crushed between a pastry shop and a tattoo parlor, and it's promoted with a comic book-style painting painted onto the blocks. So it's not really ordinary.

Think about the Power Breakfast Bowl, which takes in fried egg or tofu, lentil and chickpea mince, vegetarian cheddar, child spinach and sriracha sauce, enclosed by a burrito. Or then again there's veggie lover and gluten free hotcakes with apple and berry compote, chocolate sauce, granola and vegetarian frozen yogurt, or even a cinnamon and raisin bagel with peanut butter, syrup, banana, nut sprinkle, cream cheddar and star anise coat. That takes past peanut butter sarmie to an unheard of level

THE Break Room in the town of Hilton.

The most recent expansion was a sushi canine. This is a jab style burrito that is battered and crumbed, and singed to a brilliant fresh. It's loaded down with tofu, cucumber, avo, edamame beans, salted ginger, gochujang (Korean stew) glue, togarashi (fiery Japanese mayo) sauce, and sesame seeds. Luckily, for this non-admirer of tofu, there is a salmon or fish choice here too. In the future.

Yet, back to that Famous Eggslut (R55). It's an English biscuit, finished off with tomato, avo, onion, child spinach, rocket, and sweet bean stew vegetarian mayo, with a poached egg or dark mushrooms, or both (add R6). I went for both. It was just as solid and muddled as it sounded ‒ however tasty. It was washed down with an awesome espresso