The Health Benefits Of Coconut Milk 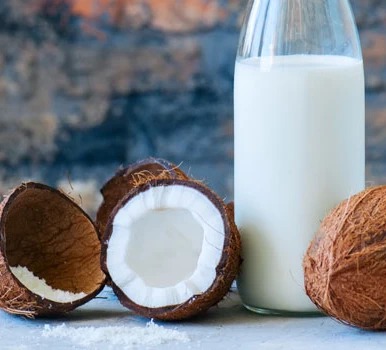 The coconut (cocos nucifera) belongs to the palm family (arecaceae). Grown in abundance in Malaysia, Polynesia and southern Asia, they are classed as a fruit and frequently confused for a nut – but the coconut is actually a one-seeded drupe. In Sanskrit, the coconut palm is known as kalpa vriksha – ‘tree which gives all that is necessary for living’ – because nearly all parts can be used, including the water, milk, flesh, sugar and oil. Even the husks and leaves are used as materials in furnishings and decoration. Palm trees produce coconuts up to 13 times a year, and although it takes a year for the coconuts to mature, a fully blossomed tree can produce between 60-180 coconuts in a single harvest.

A note on coconut water…

Coconut milk is different to coconut water. Coconut water is the clear liquid from the centre of the young, green coconut and is low in fat but rich in easily digested carbohydrates. Coconut water has received a great deal of attention for its perceived health benefits, and is an important treatment for acute diarrhoea in the developing world. It is said to have a similar electrolyte balance as that found in isotonic drinks, which some claim to be useful for rehydration after intensive exercise. However, the research to date has shown inconsistent findings to support the use of coconut water as an alternative sports drink.

Coconut flesh is highly nutritious and rich in fibre, vitamins C, E, B1, B3, B5 and B6 and minerals including iron, selenium, sodium, calcium, magnesium and phosphorous. However, the coconut milk available to us in the UK is typically canned and potentially lacking in many of these valuable micronutrients. Unlike cow’s milk, coconut milk is lactose-free so can be used as a milk substitute by those with lactose intolerance. It is a popular choice with vegans, and makes a great base for smoothies, milkshakes or as a dairy alternative in baking.

Coconuts are one of those foods that seem to oscillate between the ‘good’ food and ‘bad’ food camps. Coconut milk, especially the lower-fat variety, can be used in moderation (1-2 times per week). However, The British Heart Foundation recommends swapping saturated fats, including coconut oil, for unsaturated oils when cooking.

The State Of Zimbabwean Police Station Got People Talking

There Is No Need For A House To Be Fully Complete To Look Attractive, This House Proves That

10 Clever Ways to Instantly Add Value to Your Home