20 Of Rihanna's Most Extravagant Style Moments Through The Years

By Lingiswa (self media writer) | 26 days ago 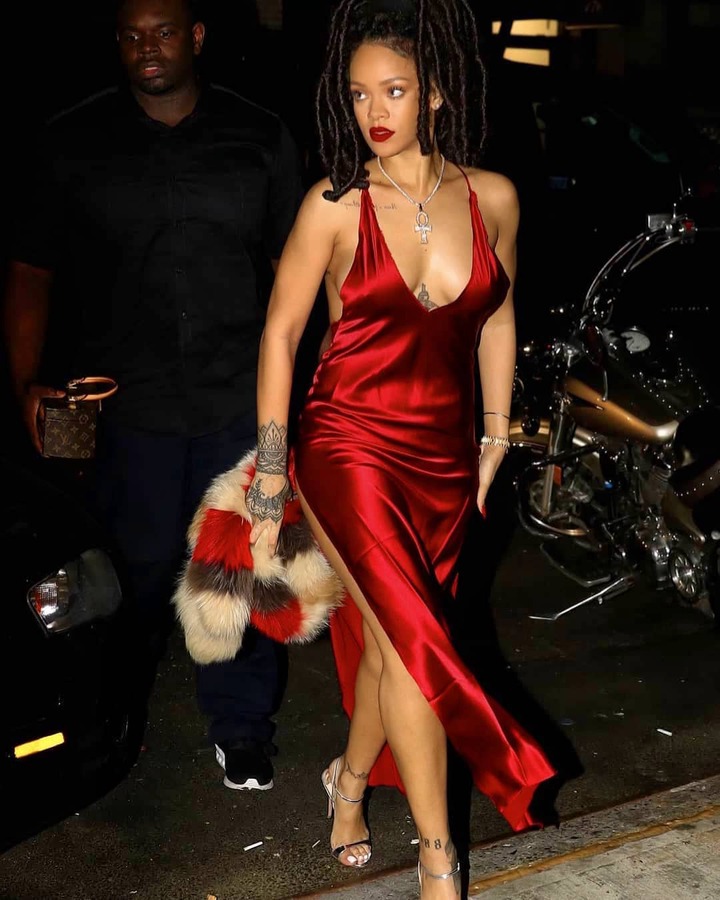 As far as fashion is concerned, Rihanna has always been ahead of the curve - able to dabble in trends in a genuinely fearless manner. Wackiness, in many ways, is central to her style influence.

Revisit Rihanna's most head-turning looks, below. 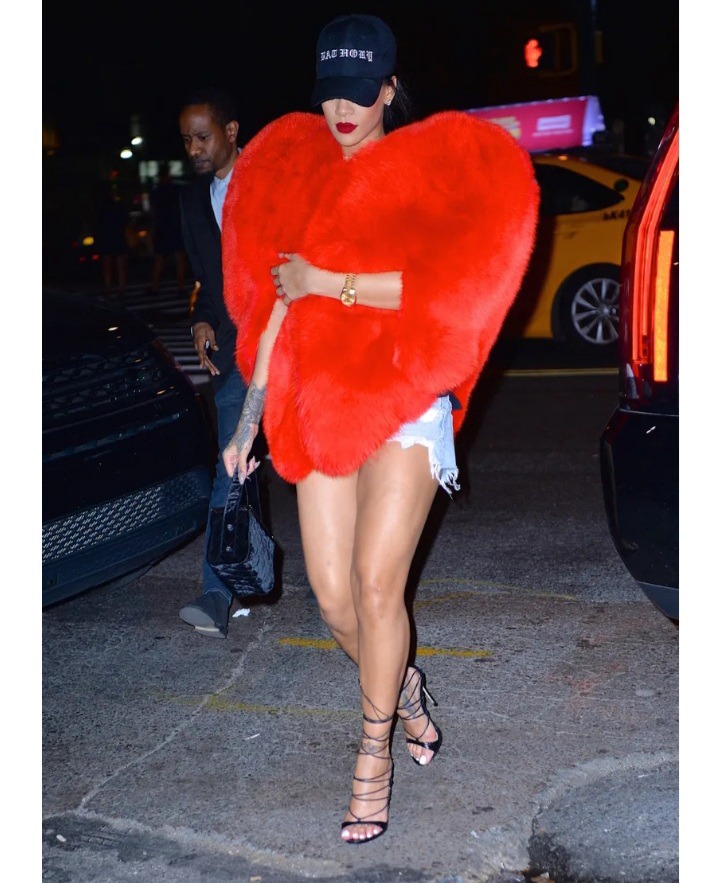 Rihanna was one of the first out the gate in Saint Laurent's fuzzy heart coat back in 2016, shown at the maison's autumn/winter 2016 showcase. 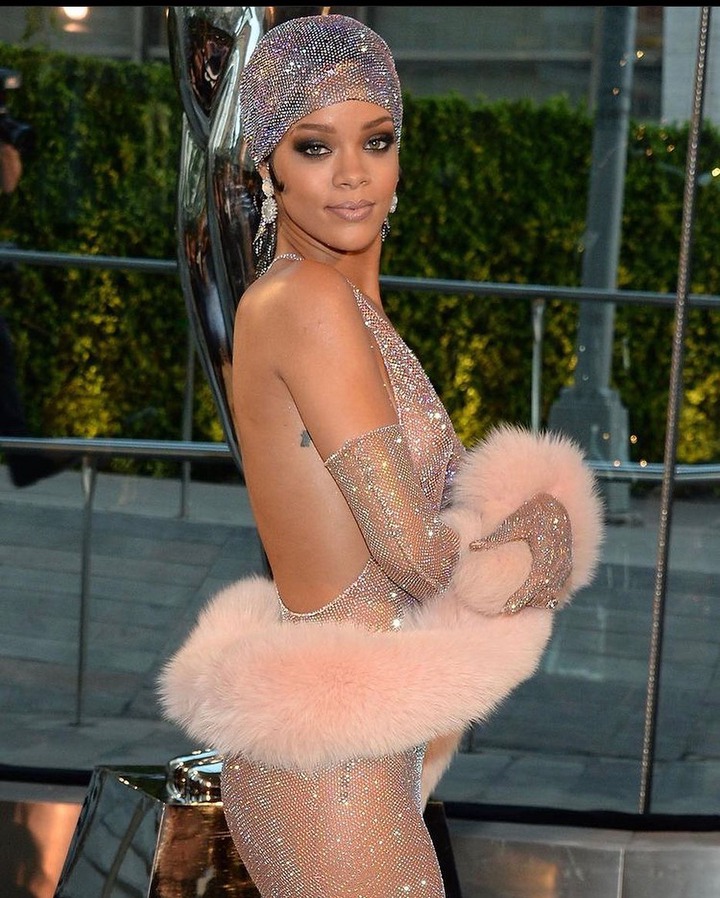 Many stars have braved the naked dress - Rihanna included. She commanded attention in a sparkling Swarovski crystal-encrusted look by Adam Selman at the CFDA Awards in 2014. 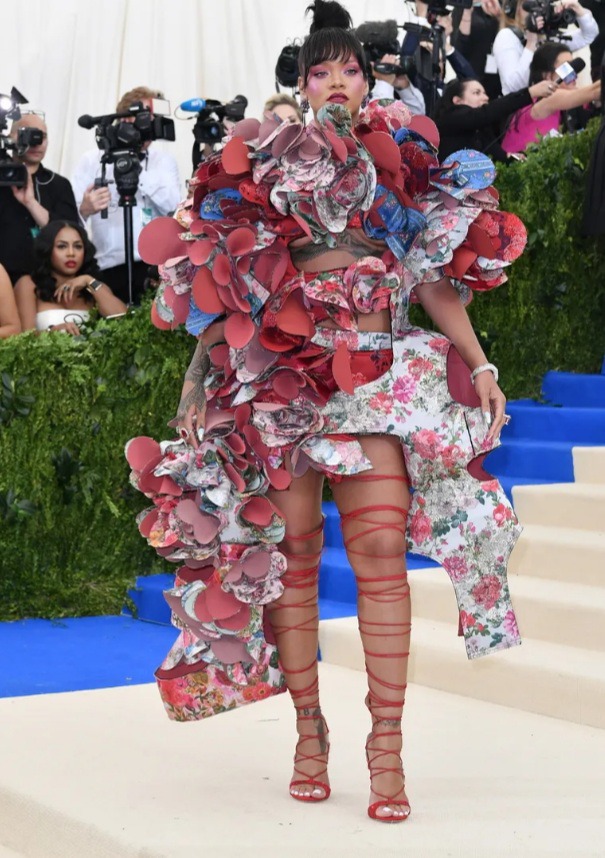 Comme des Garçons was behind the Met eccentric look that she wore to the Met Gala in 2017. 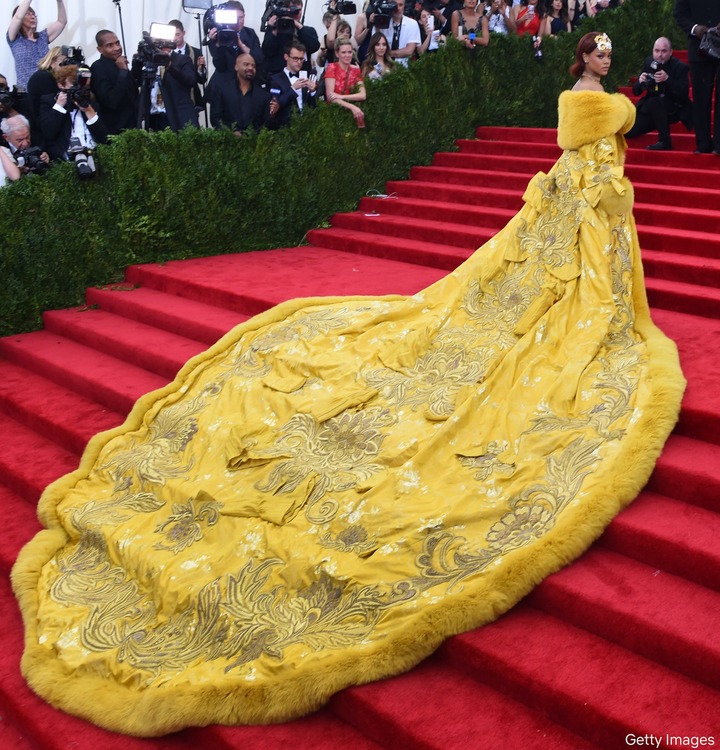 The vibrant gown that Rihanna wore to the Met Gala in 2015 will go down in history as one of the best looks the event has ever witnessed. Rihanna found the designer of the gown on the internet. It took a whole year to make this beautiful shiny gown for Rihanna 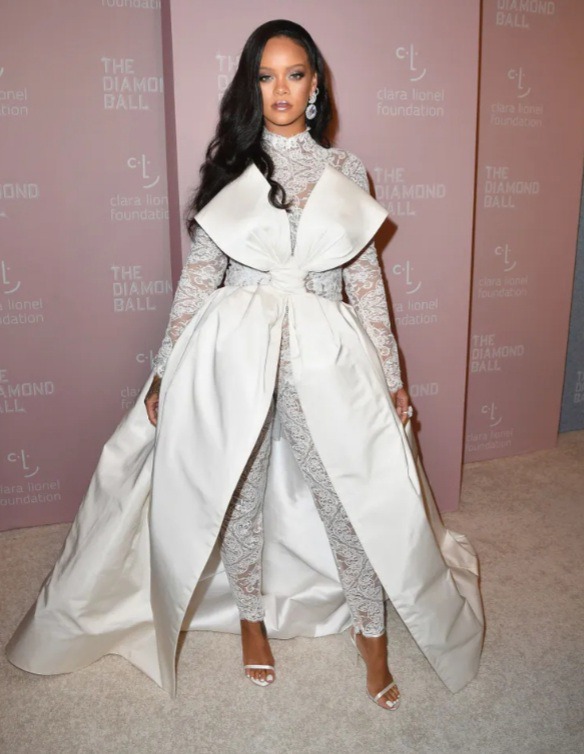 Rihanna attended her Diamond Ball - a party that she throws every year - wearing Alexis Mabille couture and Chopard jewels in 2018. 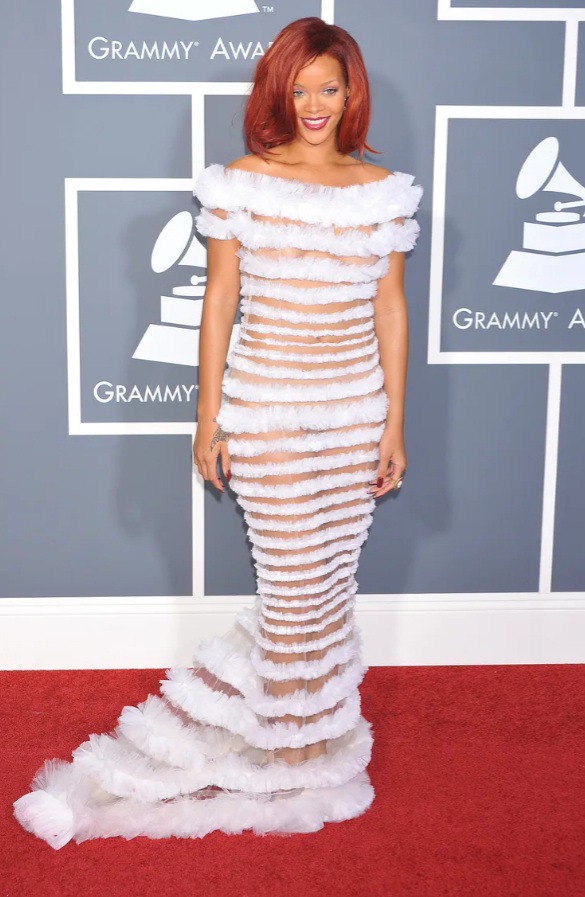 The Adam Selman gown that Rihanna wore to the CFDAs in 2014 is perhaps her most naked dress, but it wasn't the first. In 2011, she took to the red carpet in a frilled semi sheer gown by Jean Paul Gaultier couture. 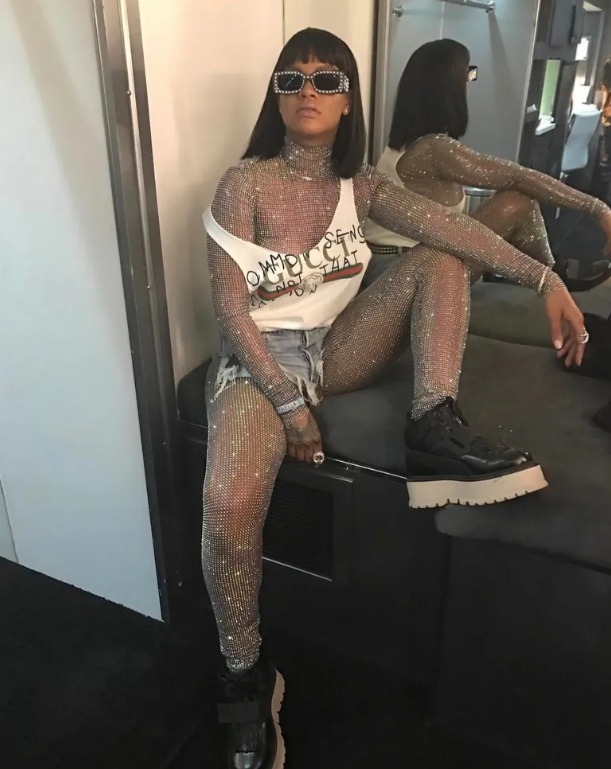 Forget wellies: Rihanna attended Coachella in 2017 wearing a shimmering Gucci catsuit, worn underneath denim cut-offs and a tank top. Even her festival sunglasses were extra: they were decorated with myriad pearls. 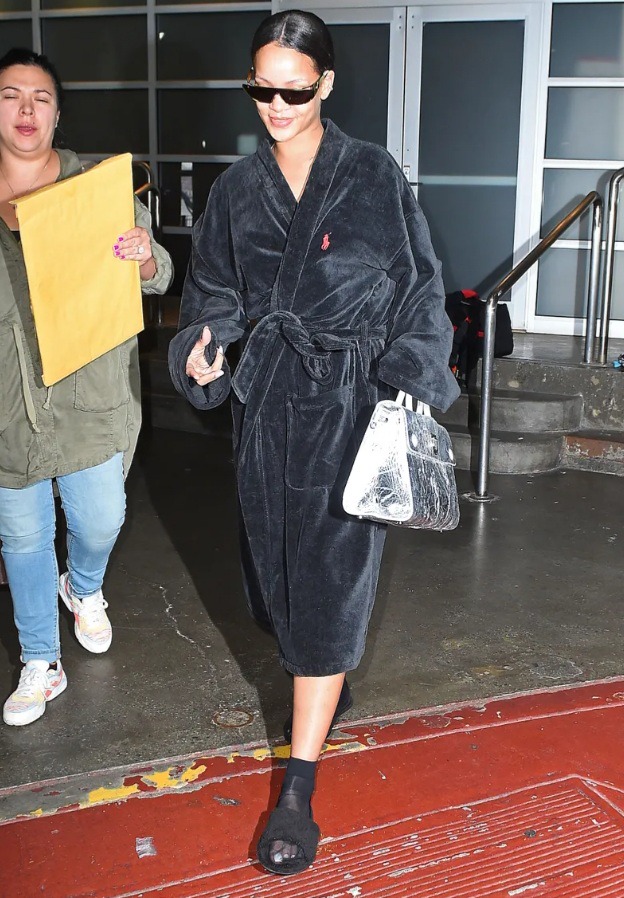 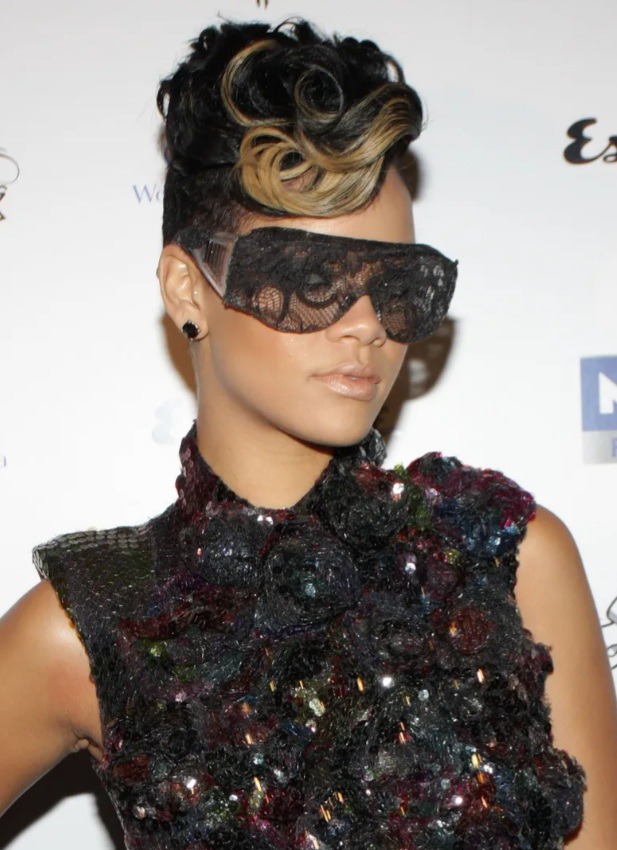 She probably couldn't see, but Rihanna looked chic in the lace sunglasses that she wore to an event in 2009. 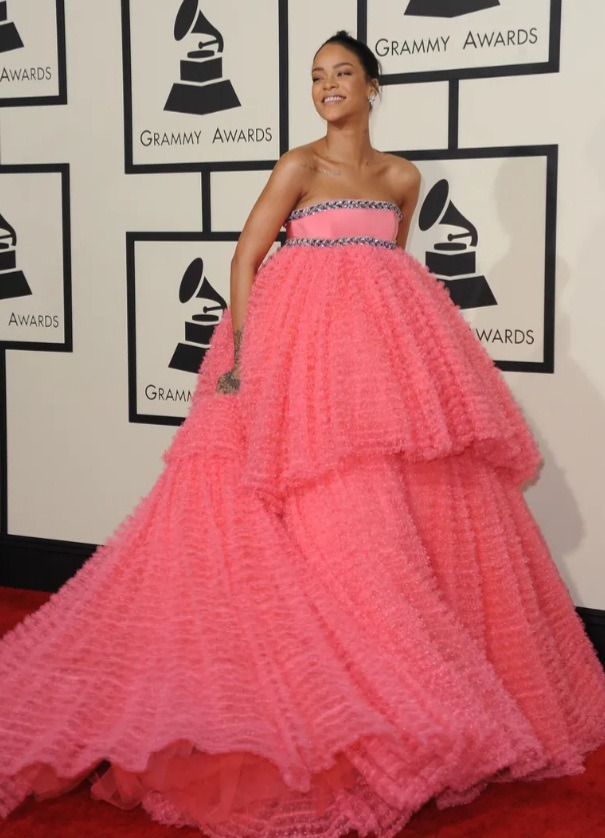 Rihanna embodied her inner princess at the Grammys in 2015, when she wore a frou frou tulle gown designed by Giambattista Valli.

11. Decked out in Burberry check 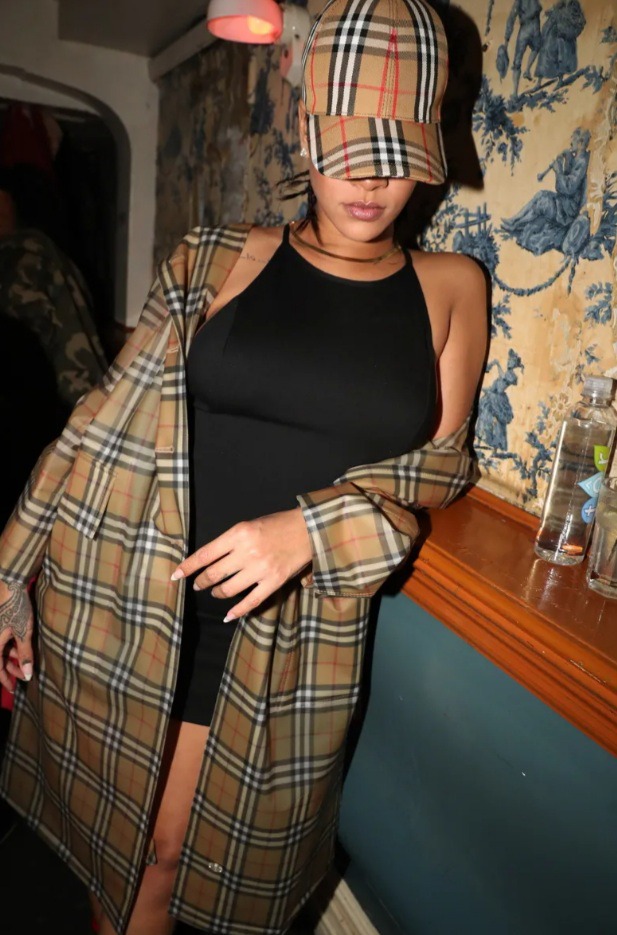 Rihanna put her own twist on Burberry's heritage check pattern in 2017: she wore a crop and matching coat embroidered with the brand's signature Nova print. 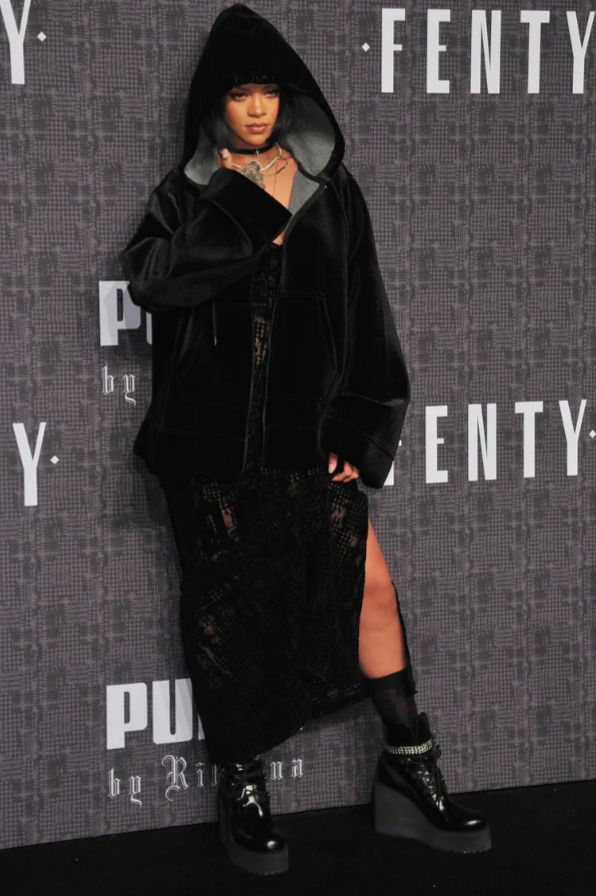 Hoods on the red carpet? Rihanna says yes. She wore a look from Fenty X Puma to attend her debut autumn/winter 2016 show. 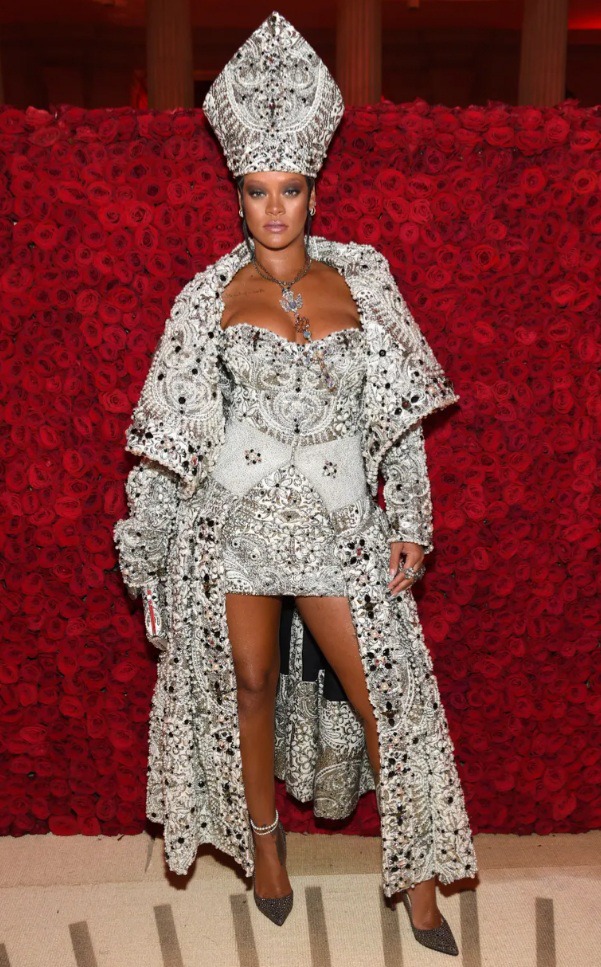 John Galliano created the singer's shimmering look for the 2018 Met Gala. Rihanna bleached her eyebrows and her hat was inspired by the Pope. 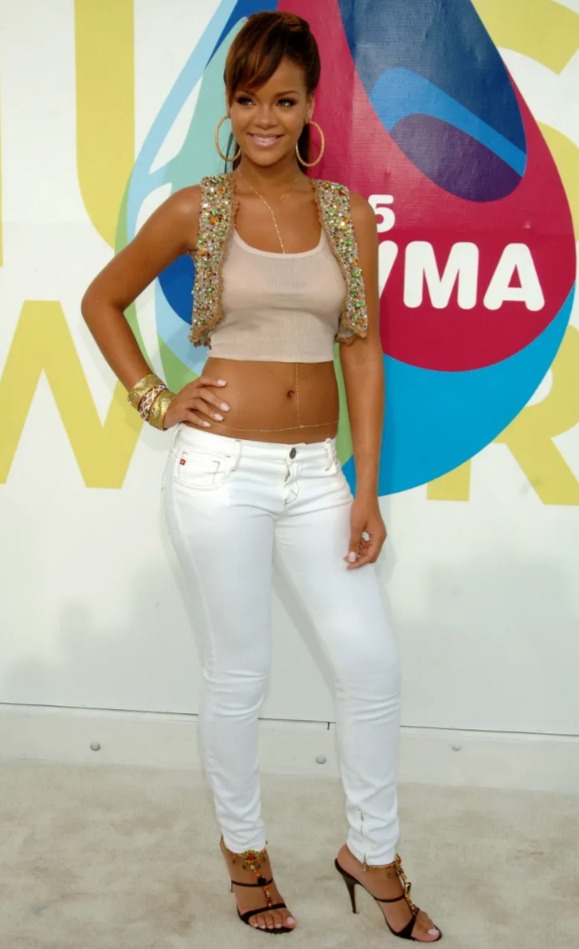 Rihanna mastered the low-rise jeans trend the first time around - wearing a white pair with an encrusted waistcoat and body jewelry to the MTV VMAs in 2005. 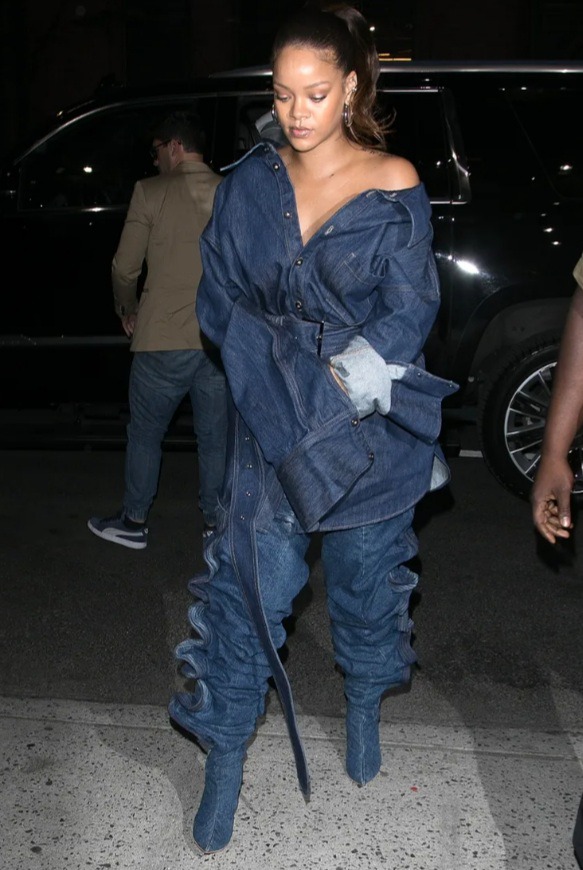 Rihanna is a staunch supporter of the Canadian tuxedo. She took Y/Projects's thigh high denim boots for a spin in 2017, paired with layered denim pieces. 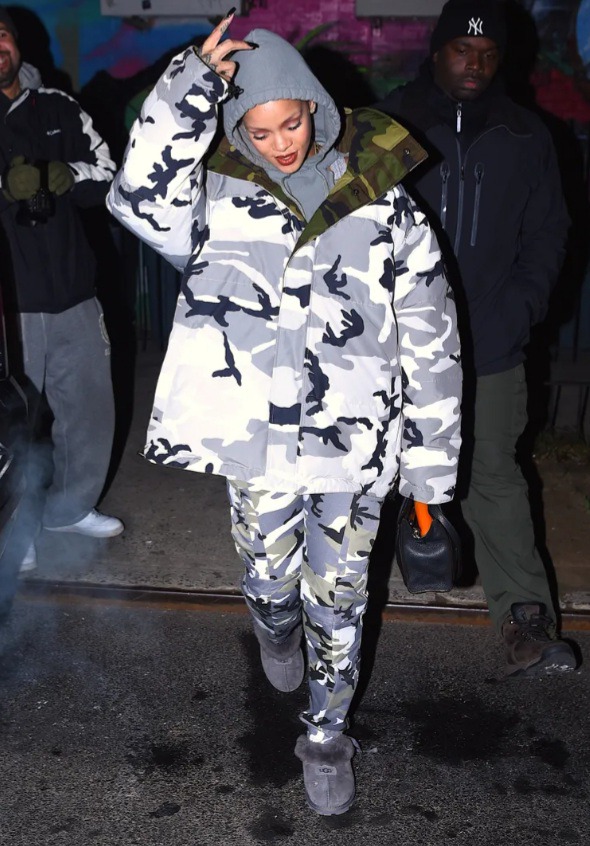 Rihanna is never one to do things by halves. For an outing with her friends in 2017, she spotted wearing a camo Vetements X Canada Goose parka, matching trousers and a hoodie. 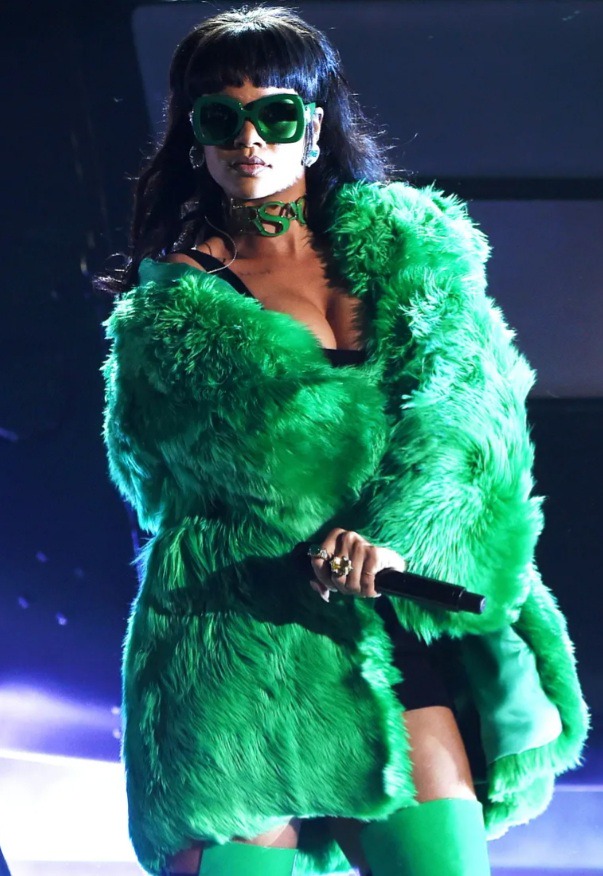 Judging by the amount of green in Rihanna's wardrobe, one can only assume that it's one of her favourite colours. For the BBHMM performance in 2015, she wore emerald pieces from Versace's autumn/winter 2015 collection. 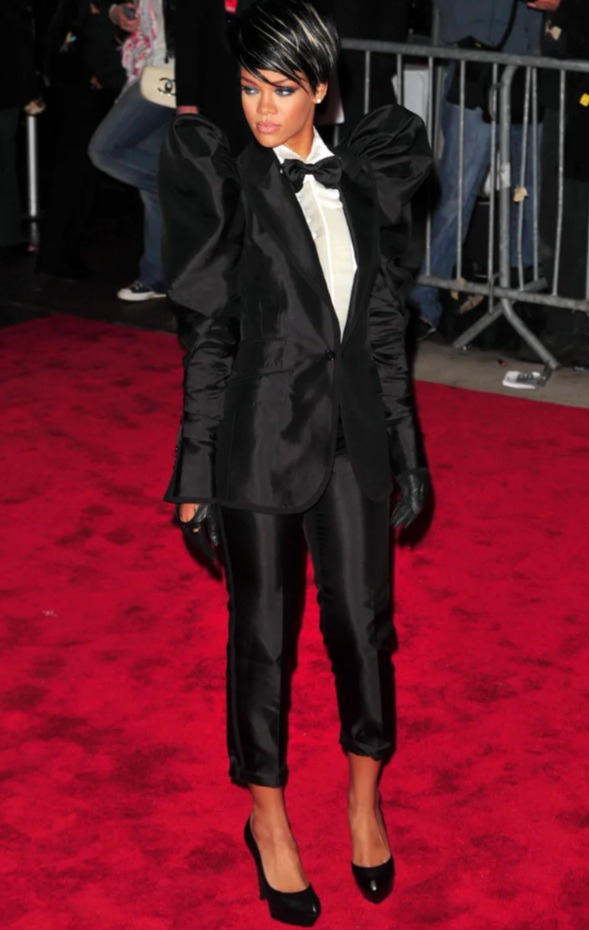 At the Met Gala in 2009, Rihanna forewent a gown in favour of a tuxedo, paired with gloves and black heels. 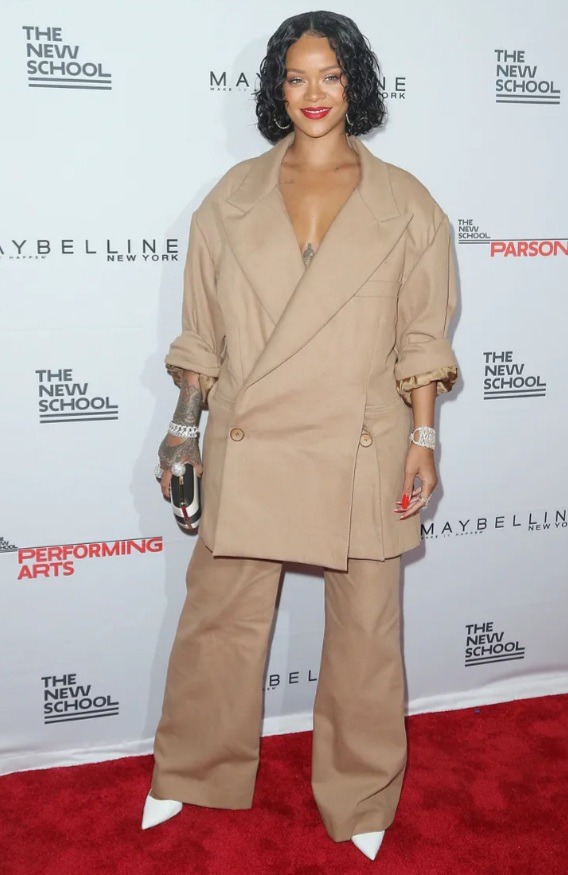 There are a few people who ace louche suits. Rihanna is one of them. She wore a custom camel suit by Matthew Adams Dolan to the Parsons benefit in 2017. 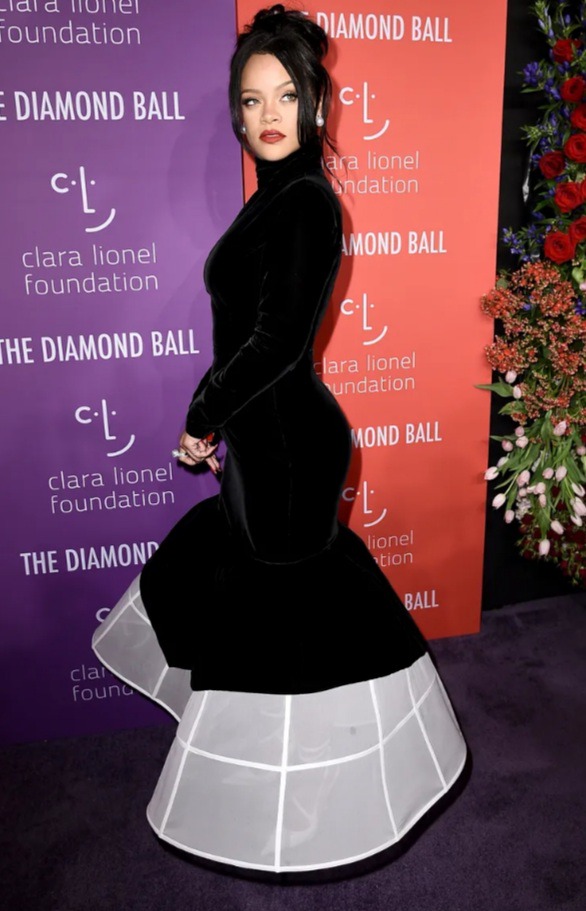 Rihanna picked a velvet gown from Givenchy's autumn/winter 2019 couture collection to wear to her annual Diamond Ball in 2019.

New green chicken, are you willing to eat it with your family?

“He was Born With 5 Months, Doctors Said He won’t Survive a Year, But Look at him Now”

The Hardest Part of Marriage You Won't Be Told