Gucci vs. Louis Vuitton: Which Brand Is Best? 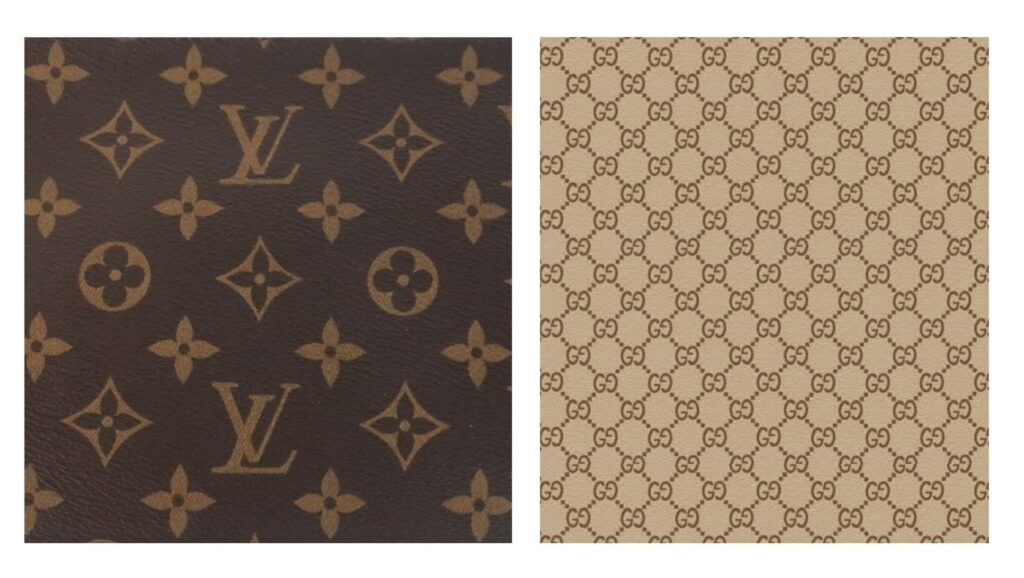 While they both Louis Vuitton and Gucci receive plenty of attention from socialites, celebrities, and fashion bloggers, they are both quite different in style. Most noticeably, Louis Vuitton’s style is more sophisticated and formal, whereas Gucci’s is more trend-forward and edgy. What brand you choose really depends on your personal style and current wardrobe.

In this post, we will be looking at the main differences between Louis Vuitton vs. Gucci, their own unique histories and styles, their value, and compare them for you. That way, you can come out with a clear decision of which brand you think is best for you.

What are the Differences Between Gucci and Louis Vuitton? 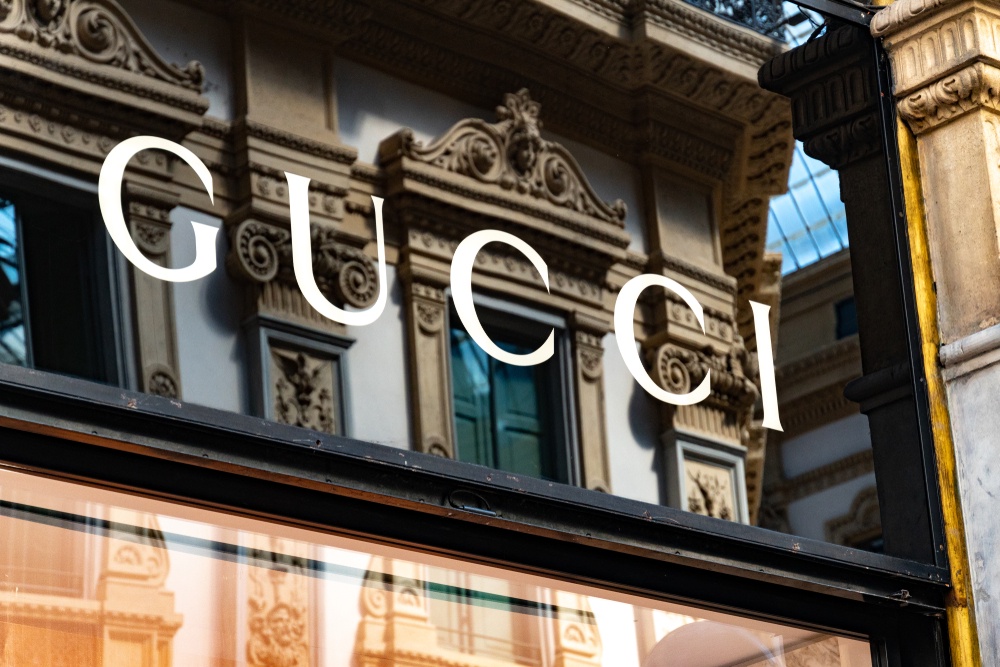 Gucci and Louis Vuitton are two major fashion houses that are famous for their handbags. Each company has its own iconic logos and distinguishing brand characteristics, as well as a reputation for luxury and fashion.

Gucci, also known as the House of Gucci, is an Italian fashion house that was founded in Florence in 1921. Gucci was founded by Guccio Gucci, whose sons went on to work in the company and help it achieve international acclaim.

The company was initially known for the ferocious fighting among family members, but it was also able to grow rapidly. Pinault-Printemps-Redoute now owns the company.

Louis Vuitton, also known as Louis Vuitton Malletier, is a French fashion house founded in 1854. The company started out making traveling cases and trunks, which it still does today.

Despite its collaboration with the Vichy regime during World War II, the company expanded rapidly. Following the war, the company’s product line expanded, and it began manufacturing purses and other items.

Accessories, clothing, including children’s clothing, and handbags are all available from Gucci. The Gucci collection is distinguished by the striped webbing that appears on many of its products.

This trademark style, based on the material used on saddle girths, was developed in the 1950s. At the same time, Gucci began using its metal horse-bit on its products.

Another notable item was the Bamboo-handled handbag, which was introduced in 1947. The GG logo was developed in the 1960s alongside products such as the Jackie O bag and the Flora scarf.

Louis Vuitton is best known for its handbags, but it also makes shoes, watches, trunks and luggage, and accessories.

The Louis Vuitton brand is well-known for its LV monogram, which appears on many of its products, as well as its Monogram and Damier canvases.

Interbrand named Gucci one of the top 100 brands in the world in 2008. Its annual revenue is approximately 2.2 billion Euros. It sells the most of any Italian brand.

Although there are approximately 278 Gucci stores worldwide, Gucci products are also sold in other stores, primarily large department stores.

Louis Vuitton is one of the world’s most prestigious fashion houses. Its products are primarily sold in department stores and boutiques.

Louis Vuitton is eager to build its reputation, and it caters to a number of well-known celebrities. In addition, celebrities such as Jennifer Lopez and Madonna have appeared in its advertising campaigns.

Both brands are well-known for producing high-quality items, but Louis Vuitton consistently ranks higher in terms of overall quality and attention to detail.

Louis Vuitton is known for never undervaluing its products for the general public. It has kept careful control over the amount of stock available, and if there is any excess stock, it is never sold at a discount.

Instead, the excess is removed from the market, preserving the sense of exclusivity surrounding its pieces.

Louis Vuitton has a more established reputation than Gucci, which is understandable given that the brand is nearly seven decades older.

Louis Vuitton has a reputation for enduring, timeless style and quality. On the other hand, Gucci is known as an innovative but at times controversial brand whose reputation has changed over the years.

This was to target various consumer groups, from the sultry and sleek styles of the Tom Ford era to Michele’s more quirky and playful offerings.

Louis Vuitton’s long-standing reputation for timeless style and quality gives its offerings a slightly higher sense of value than Gucci’s, though both brands’ pieces are undeniably desirable luxury items.

When it comes to the net worth of Gucci vs. Louis Vuitton and their rate of growth since inception, their consistency and customer satisfaction has kept them at the top.

For over 167 years, Louis Vuitton has steadily grown, imprinting its signature in the hearts of its numerous clients. Kering’s (parent company) Louis Vuitton brand is currently valued at $416.02 billion as of November 17th, 2021.

On the other hand, Gucci is currently estimated to have a net worth of more than $15.9 billion as of November 2021. This was amassed solely through hard work, customer satisfaction, and a commitment to creating an ever-changing yet captivating style that changes with time and season.

“Gucci (the 33rd most valuable global brand in all sectors) has a $15.949 billion brand valuation and saw 23 percent growth, making it the fastest-growing luxury retailer,” according to Interbrand.

Since their inception, both brands have come a long way, surviving decades of ever-changing fashion and style.

Despite the fact that Louis Vuitton has been in the industry longer and has more experience, each brand has a distinct style that appeals to its target audience, and each has satisfied its customers over time.

Both luxury brands have the same target market, which is divided into four segments: geographical, behavioral, demographic, and psychographic.

Gucci caters to upper and middle-class consumers aged 20 to 50. They are always in the public eye, taking advantage of their extensive social media presence and followers. They use celebrities to help with marketing and brand awareness. They also target high-income earners, celebrities, fashionistas, and the wealthy.

Louis Vuitton caters to both sexes. Wealthy middle-aged men and women ranging in age from 35 to 80, as well as fashionable young females aged 8 to 34. These are people who can afford the brand’s opulence.

What is the Most Expensive Brand, Gucci or Louis Vuitton? 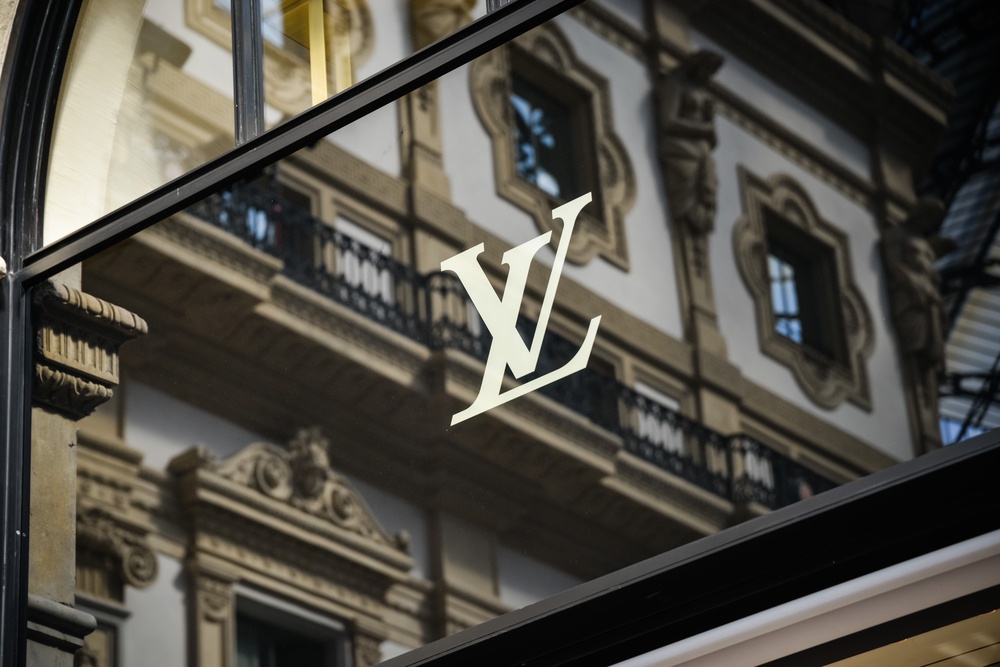 When it comes to bags, Louis Vuitton is more expensive than Gucci. This is due to a more solid reputation in bag and trunk manufacturing that spans 167 years.

LV conveys a sense of timeless style and elegance that has been passed down from generation to generation. It kept its top-tier premium quality. Gucci prices, on the other hand, are slightly lower but still luxurious.

Why is Louis Vuitton so Expensive? 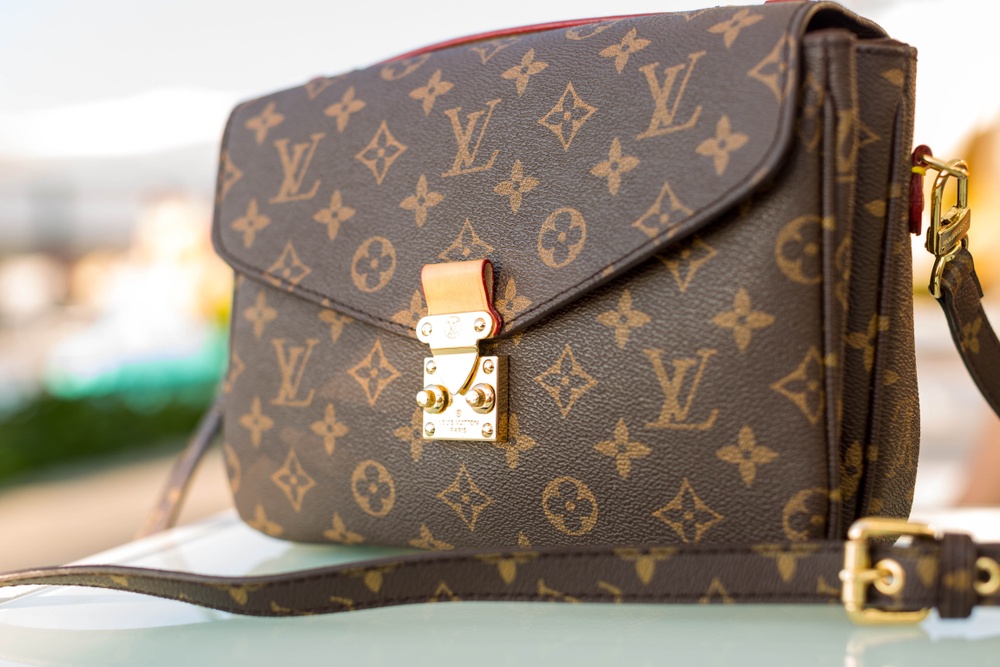 Louis Vuitton (the designer) began as a manufacturer of high-end suitcases. He once created personalized luggage for the wife of French Emperor Napoleon III. The brand has a long history and is well-known, which causes prices to rise.

Louis Vuitton (the brand) has also appeared in films such as Death Becomes Her, Mean Girls, Sex And The City, Coming to America, James Bond – A View to a Kill, and Charade.

Because luxury brands, such as Louis Vuitton, are not affordable to everyone, they are more expensive than mass-market and high-end brands.

Superior craftsmanship, materials, and shopping experiences are synonymous with luxury. Louis Vuitton’s products are more expensive because they provide all of this and more.

It gives those who own any French brand product status and exclusivity. Most people are familiar with the elegant LV monogram. When you choose Louis Vuitton, you project the image of a wealthy individual who can afford an exclusive brand that most people cannot.

Why is Gucci so Expensive? 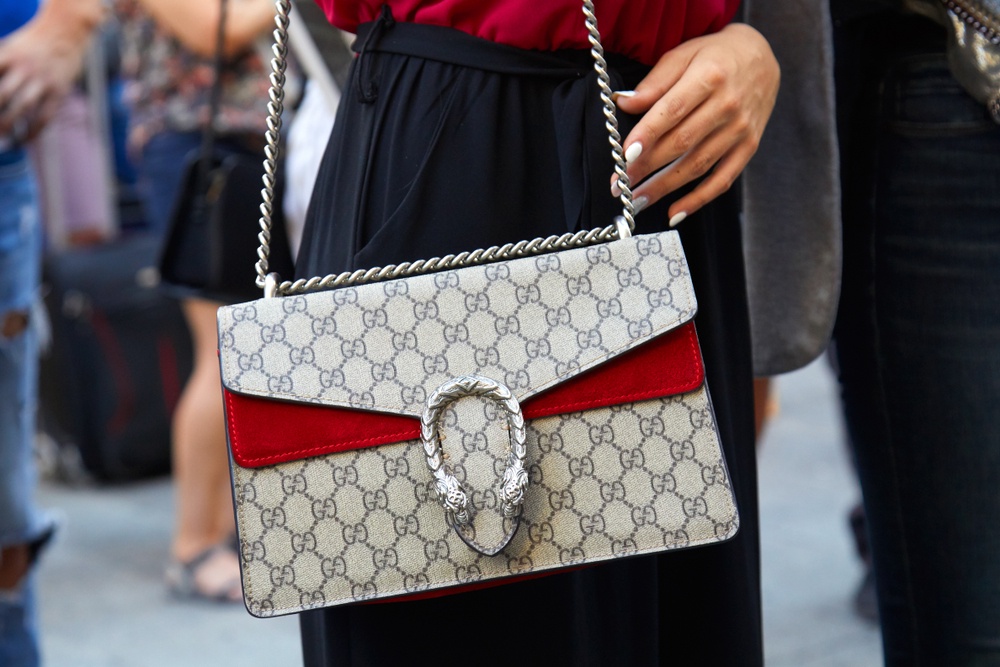 Gucci’s high prices are due to the brand’s rich history and astute business strategy. The Italian brand creates consumer desire and increased demand by combining unique design elements and clever marketing. But there’s a lot more to it…

Gucci bags have a rich history with royals, politicians, heads of state, and movie stars, a history that bestows on the Italian label a distinct sense of prestige, status, and desirability.

Which is Better: Gucci or Louis Vuitton?

Louis Vuitton makes excellent leather goods; you won’t find anything wrong with the brand regarding the material. Having said that, their other products can be a bit bland.

For example, their scarves aren’t fabulous. They’re so flimsy and pilling-prone that you’ll always find an excuse not to wear them.

However, LV does an excellent job of controlling the availability of their products, so you’ll rarely come across new-old stock like you would with Gucci.

At the same time, it is relatively simple to find an LV product that will look just as good/relevant now as it will in 30 years. They have a reasonably timeless style.

The brand itself is more trendy than Gucci, as many of their products will quickly become outdated. They do, however, have some very classic styles that a lot of people like.

So to say one is better than the other is difficult, as it really depends on your style. If you want something that’s consistent, then Louis Vuitton is the best. However, if you are looking for something that changes with the trends, Gucci is the brand you would prefer.

Gucci is a high-end designer who sources high-quality raw materials and employs production methods acceptable to their clients.

There is little to detract from the brand’s popularity if there is no controversy surrounding its methods. Furthermore, Gucci employs the talents of the world’s top fashion designers to ensure that the finished goods are in sync with current fashion trends (they frequently set the trends).

They attempt to stay timeless so that they never go out of style. In addition, the brand has a high marketing overhead.

There is a lot that goes into the creation of each product, which necessitates a higher selling price, but the overhead cost is not the only factor to consider when pricing.

Is Gucci Worth More Than LV? 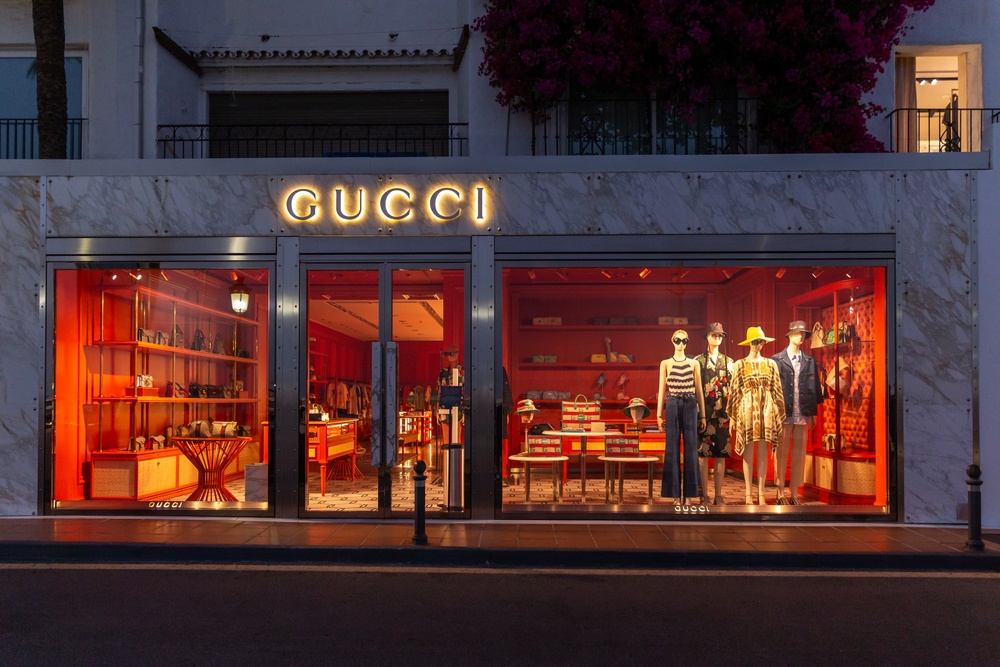 Therefore, Louis Vuitton is worth quite a bit more than Gucci. However, this is mainly due to the fact that it has been around far longer than Gucci. So, the brand has had time to build and gain a following among the wealthy.

Gucci fans will tell you that their products are all of very high quality. They source materials that will last and that you can tell are unique and high-quality.

One of the fantastic things Gucci has been able to create is a brand that is completely trusting and believes in quality. They do not cut corners, and they place value on quality control.