3 Men That Became Famous Because Of Their Unique Tattoos(Photos)

By gisthub (self media writer) | 23 days ago

A tattoo is a type of body modification that involves inserting indelible or temporary ink, dyes, and/or pigments into the dermis layer of the skin to form a design. Tattooing is the art of making tattoos.

In today's article, we'll look at three men who became famous as a result of the tattoos they wore. Most tattoos are inspired by stories, but some stand out.

Many people are well-known for their tattoos, but for the purposes of this article, we will focus on three men. These men are Tom Leppard, Gregory Paul McLaren, and Eric Sprague.

Tom Leppard, born Tom Wooldridge, was an English-born soldier who was previously considered by Guinness World Records to be the world's most tattooed man and later recognized as the most tattooed senior citizen. 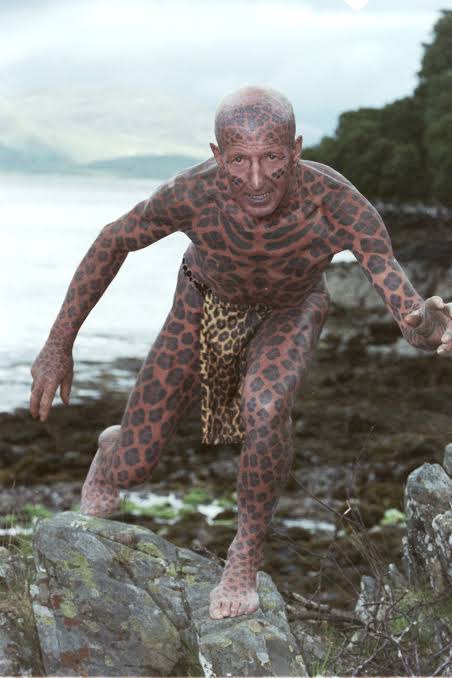 He is said to have spent £5,500 on his extensive body modifications, which covered nearly all of his skin in a leopard-like patterned pattern. He stated that he had no connection to leopards and chose spots solely because they were easy for tattoo artists to do on a large scale. Leppard was a practicing Roman Catholic. 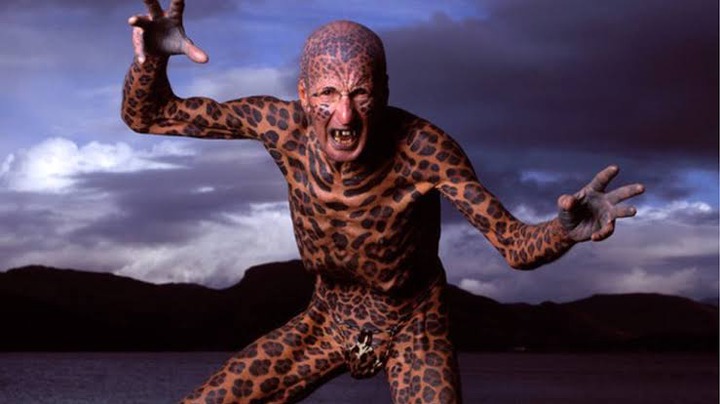 After 28 years of service in the armed forces, including stints with the Royal Navy and then as a ccoloursergeant in the Rhodesian Special Forces, he moved from London to a small derelict bothy (hut) without amenities on the Isle of Skye, Scotland, where he lived as a hermit for the next 20 years until 2008. 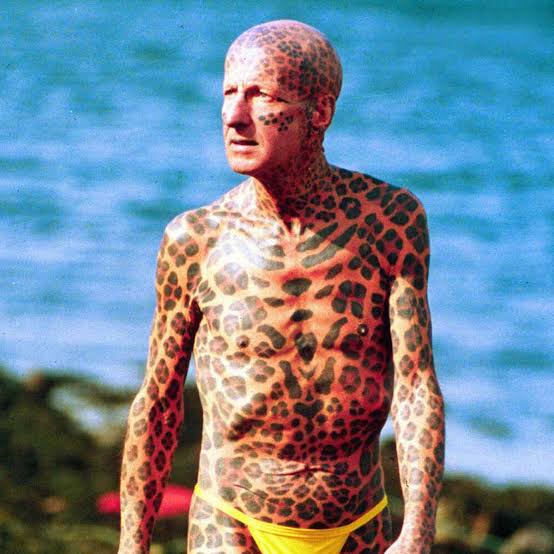 He would kayak to the mainland once a week to get supplies and pick up his pension and groceries. He then moved to a larger house in Broadford, Skye, and then to sheltered housing in a retirement home on the outskirts of Inverness. 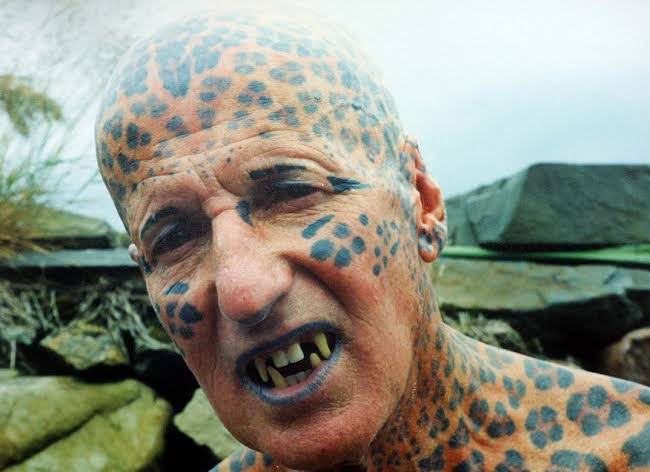 Although he was surpassed by Guinness as the "Man with the most tattoo" by Lucky Diamond Rich, he was also named the "Most Tattooed Male Senior Citizen." He passed away on June 12, 2016, at the age of 80. After his death, his title was passed on to Charles Helmke, whose body is 97.5% tattooed. 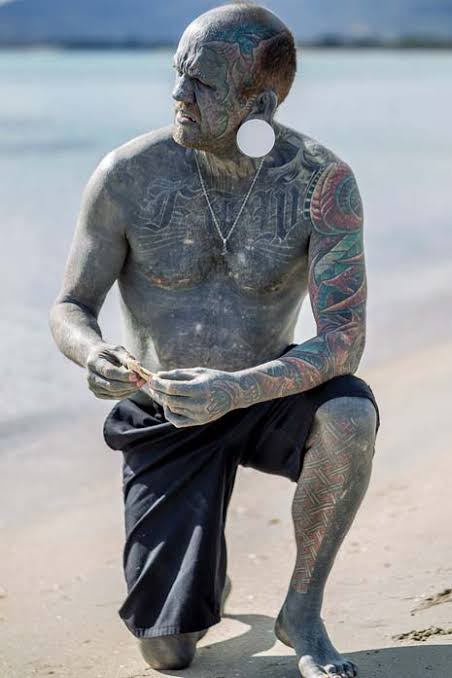 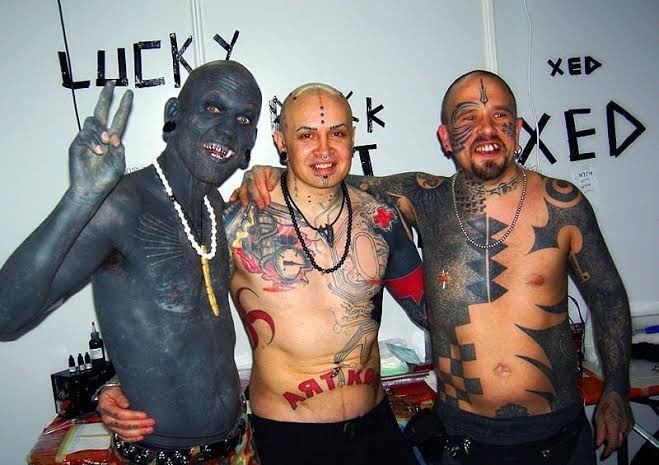 Aside from his name and profession, Lucky's most distinguishing feature is his heavily tattooed skin. His ink layers have earned him the title of most tattooed man, which he has held for over a decade. It is estimated that Lucky has spent over 1,000 hours having his body altered by tattoo artists. 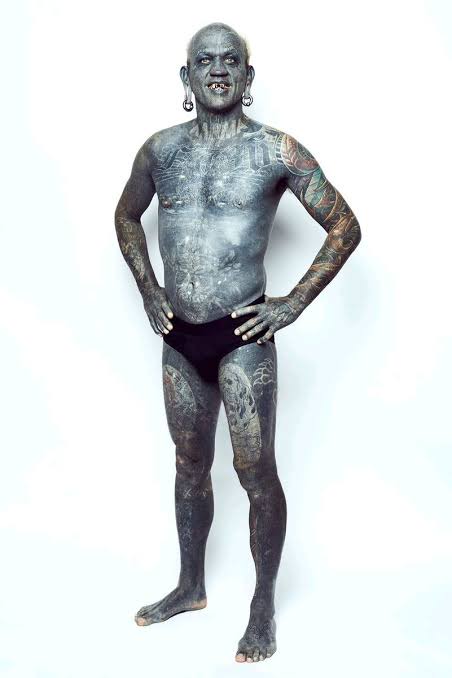 Lucky has had his earlobes stretched, his teeth replaced with silver veneers, and various piercings added to his tattoos throughout his life. 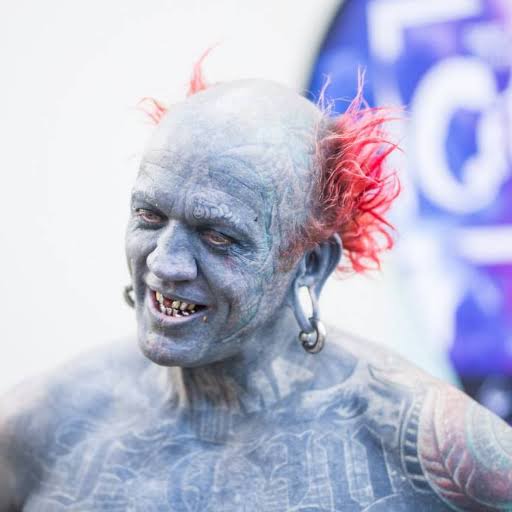 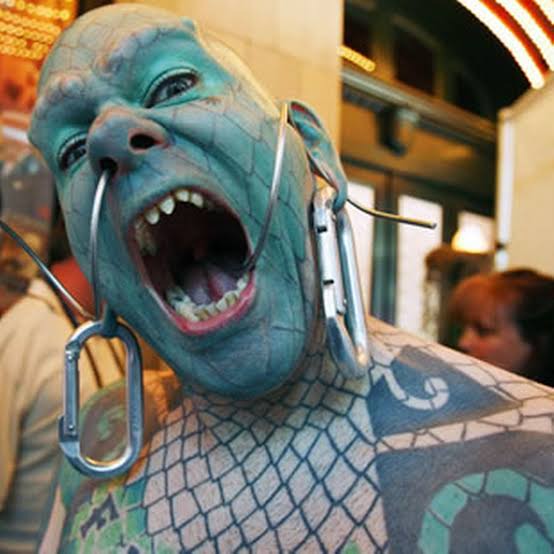 Erik Sprague, better known as The Lizardman, is a sideshow and freak show performer from the United States. He is best known for his body modifications, which include sharpened teeth, a full-body tattoo of green scales, a bifurcated tongue, subdermal implants, and green-inked lips. 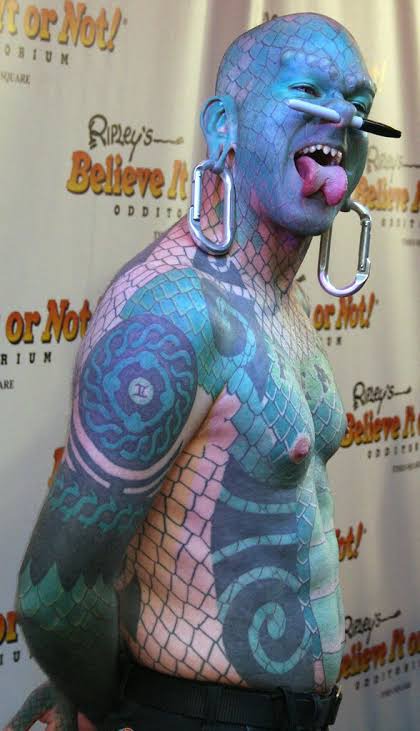 Sprague's body modifications took years and included over 700 hours of tattooing for his full-body green scale tattoo, as well as a surgically bifurcated tongue, filed teeth, and subdermal implants in his brows. 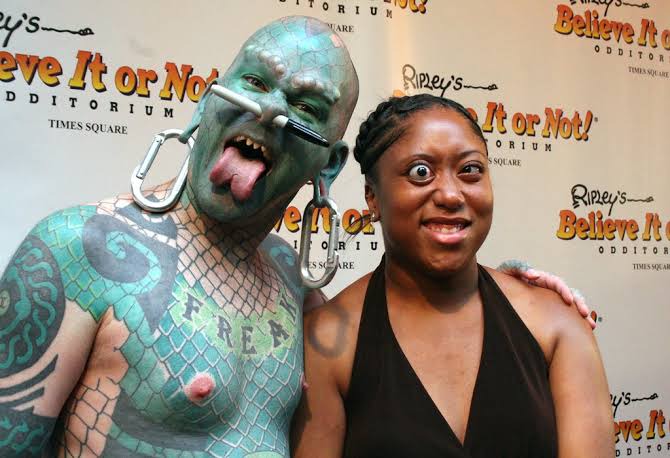 But, since his transformation, he's made a career out of his reptilian skin, touring as a freak-show performer specializing in sideshow acts like suspending weights from his body piercings, sword swallowing, and pushing a massive corkscrew through his head. 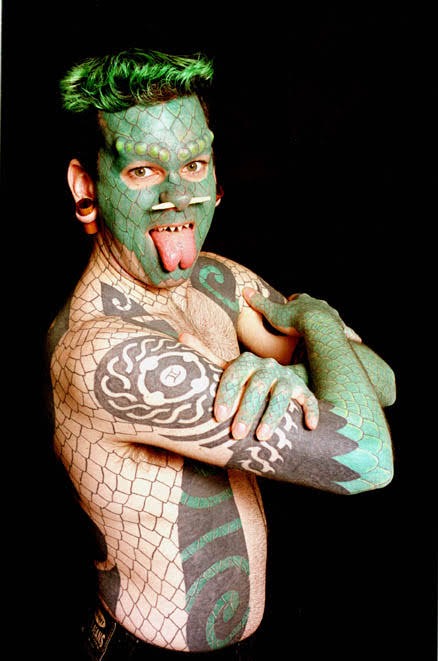 EXPOSED: Celebrities who allegedly insured their bodies parts for millions - number 3 will amaze you

Bonang vs Dj Zinhle, who is more beautiful?