What Are The Differences Between Castor Oil And Coconut Oil?

By Shanelize (self media writer) | 1 year ago 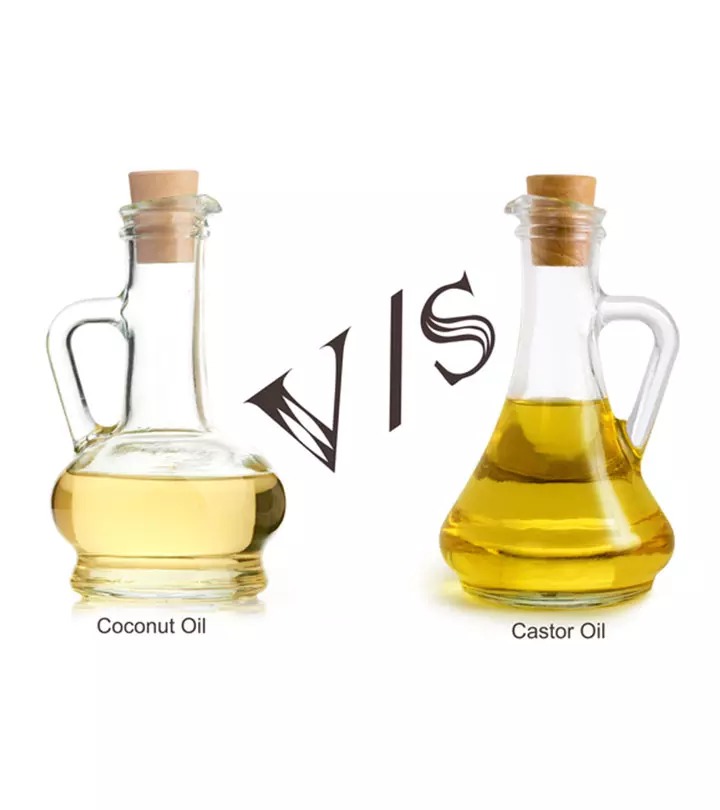 What Are The Differences Between Castor Oil And Coconut Oil?

Which oil do you use? Castor oil or coconut oil? Ever wondered what each of those is known for? Well, both have their own set of significant benefits. Depending upon the problems you have and the cures you need, each of the two oils can be used as per your requirements.

But what is the difference between castor oil and coconut oil? Both have amazing benefits with respect to hair growth and maintenance. But both these oils have different constituents and thus vary in their qualities and the effect that they have on your hair.

So what are the effects of coconut oil vs castor oil? Read to find out!

Being thick in consistency, castor oil is often misinterpreted for its skin and hair benefits. But to our utter surprise, it is a wonderful natural remedy that promotes thickening and re-growth of hair. In fact, not only for scalp, it can even be used for the eyebrows and eyelashes to make them thick, long and luscious in an easy and quick manner. Here is how this happens:

Castor oil has high amounts of ricinoleic acid, due to which it is highly anti-bacterial and anti-fungal in nature. Hence, it attacks the bacteria and fungus that dwell in the roots of the hair and prevent them from growing.

The thickness of castor oil is also an advantage as it prevents the hair from falling by coating it nicely and helping it stay firmly on its roots.

Rich in omega 9 fatty acids, castor oil proves to be a source of nourishment for the hair, hair follicles and the skin alike. It can penetrate deep into the skin and the roots of the hair and thus nourishes them finely making them stronger.

Another benefit of castor oil for hair is that it makes the hair glossy and shiny. Also, when regularly applied, it can help one have smooth hair that is easily manageable and strong as well!

Castor oil is required to be used sparingly because even a little amount of it is very thick and can spread on quite a major part of the scalp. Hence, it also proves to be quite cost-friendly, given its usage and the pricing that it has in the markets.

With all these traits, castor oil is indeed the dream oil for all those who would like to regain their lost hair or make their hair stronger! However, coconut oil is also a viable option in this context; here’s how:

If castor oil is for treating hair for issues like hair fall, and hair loss, coconut oil is that one oil that you would like to add to your regular hair care regime. The oil has properties with which it protects the hair from environmental conditions and also keeps it moisturized for long. With this, it also helps in growing the hair longer and stronger in a convenient manner.

Coconut oil is quite helpful in treating and avoiding dandruff as it has anti-fungal, anti-viral and anti-bacterial properties. At the same time, it also prevents issues like head lice and hair shedding as it contains vitamins E and K in considerable amounts.

Regular massage with coconut oil improves the hair cuticle health and strengthens the hair follicles, thus improving the strength of the hair. Alongside, massaging the hair with this oil keeps the hair and scalp moisturized and thus protects them from dust and environmental pollution.

Coconut oil is rich in lauric acid, capric acid and quite a few essential fatty acids which supply proteins to the hair and thus help in retaining their strength and prevent them from breakage and falling off.

Massaging with coconut oil also boosts the circulation of blood in the scalp and ensures a healthy supply of oxygen to the hair, thus making it stronger, softer and healthier.

Issues like split ends, hair breakage, rough/frizzy hair are also addressed by the use of coconut oil on a regular basis.

The above analysis proves that both castor oil and coconut oil are wondrous products for hair care. However, the choice that you make among these depends on the kind of issue that you would like to address. If its hair loss and hair regain, then go in for castor oil and if it is regular hair maintenance that we are talking about, then coconut oil should be your pick!

Say these 5 Prayer Points To Our Heavenly Father For Blessings

Man got attacked by a Pitbull while he was passing by the street. Look what people did for help? Sad

Video: Headless Body of an Unidentified Person Found Lying Next to his Car in Tembisa.