Ohh My Gosh, She reveals the meaning of her bizzare Met Gala outfit??

By DailyThetha. (self media writer) | 4 months ago A 40 year old Kimberly Noel Kardashian West is an American media personality, socialite, model, and businesswoman, reveal how her all_black, head to toe ensembe perfectly suited these year's them, as she posted on instagram like everybody was extremely shocked like now he is now wearing like kanye west what happened to the couple?? She just step out in an event wearing a all_black Balenciaga , she really left some social media critics so confused as others hailed the unique look they be asking themselves questions all eyes on her like is she being ??for real what a wow! Now she has taken to instagram to defend her outfit as she simply wrote" What's more American than a T_shirt head to toe ?"!

Kim Kardashian at Met gala 2021, left everybody shocked, While she thinks she rocked the outfit The oufit featured a long_sleeve turtleneck bosy suit with an oversized T_shirt , dress with a long train rounding off the look with boots, with gloves ad a mask over her face and head.

Kim arrived for the event alongside Balenciaga's creative director Demna Gvasalia, who was also covered up in a black hoodie and sweatpants. 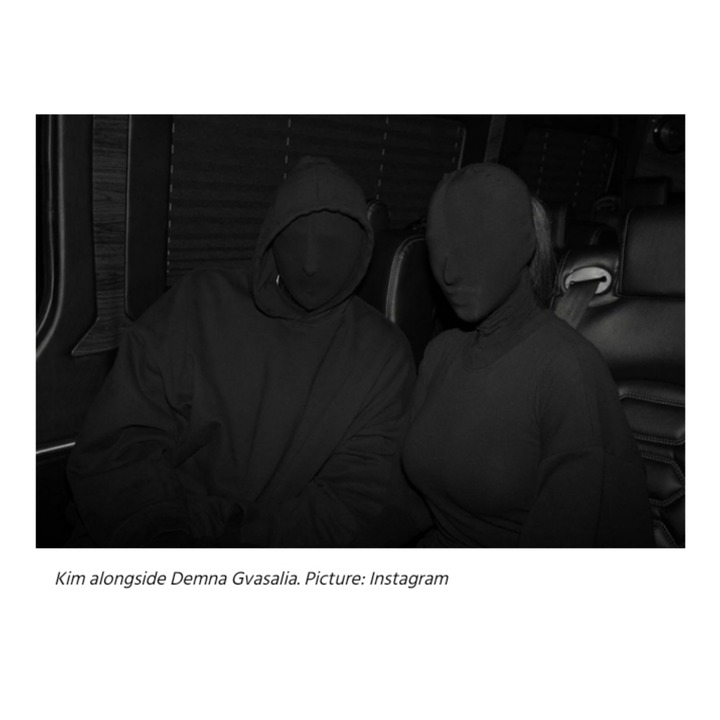 Although she didn't arrive with ex-husband Kanye West, his "presence" was still felt due to the pair's connection.

An insider said: "Even though Kanye is not attending tonight, his presence will be felt on the carpet.

"It was Kanye who introduced Kim to Demna and was instrumental in the newly formed relationship between her and Balenciaga",and it's said the 44-year-old rapper helped Kim "push creativity and people's imagination" with her ensemble.

The source added: "This look on Kim is like a new subculture and fashion statement. No logo, no face, but everyone knows it's her.

"Kanye gave her the courage to push creativity and people's imagination through art. It's the ultimate confidence."

Kim has previously credited Kanye with teaching her how to be “true to herself”.

She explained: "I got to a point - and maybe being in a relationship with Kanye for a decade and someone that absolutely didn’t care about likability factor or what any of perception of him was - as long as he was true to himself, that taught me so much in the best way of just being me and living in the moment."

I also don't blame Kim for being true to herself she's doing her. She's really looking gorgeously on her outfit though irrespective of what other are saying about it, she's being like her ex-Husband kanye West at least she learnt something from him. He was not just a husband but a great one indeed even though circumstances were faced but he really became a good one, we are all not perfect and she is now able to do what she wants in her own life no matter what others are saying, atlest she learn a good thing.

This teaches everybody to be brave and do what they want with their own lives, "YOLO" people will always talk, do you, be you even if you can wear any simple outfit people were still gonna talk.

I'am very inspired by your bravery and you really rock the outfit, a big shout out to Kim!

I just love how more confident and brave she just got , actually the lady you she is becoming, teach people to do themselves . Shout out to Kim, she deserves an award just for the outfit and being herself.

Don't be left out the world got so much for us.

Content created and supplied by: DailyThetha. (via Opera News )

WATCH: An Elephant overturned the SUV at KZN Road