Top 10 Most Colorful Animals in the World

Blue morphos are not endangered, but they face threats from habitat loss, predators and deforestation. Their beauty has also made them a frequent target of collectors. 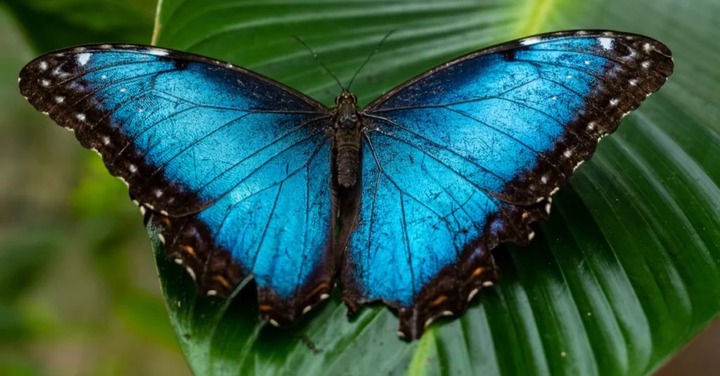 Mandrills really stand out for their unusual coloring. They have deep, dark purple and blue notches on their noses. They sport vivid red lips and red facial markings that look a lot like makeup. The fur on their rear ends is bright lavender.

Some mandrills take it over the top by wearing golden beards. These monkeys really know how to make a fashion statement. 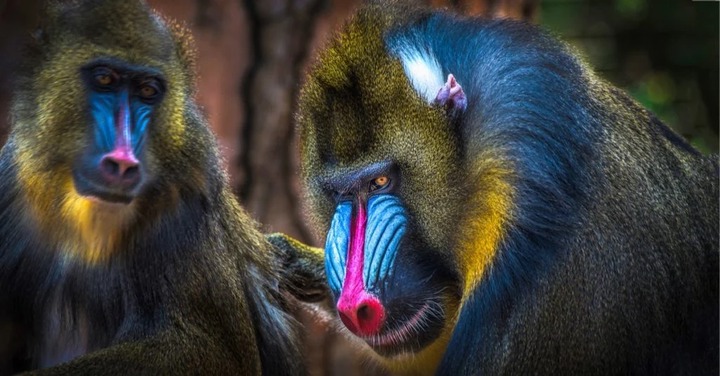 This striking chameleon (Furcifer pardalis) might be the most colorful reptile in the world. Panther chameleons are native to the tropical forests of Madagascar, but they have also been introduced to the islands of Mauritius and Reunion.

Panther chameleons are bright green and red with scales that can vary from turquoise to deep blue. They change colors in response to hunger, fear and relaxation. They can completely change color to match their mood in about 20 seconds. Panther chameleons live on forest floors and eat crickets, grasshoppers, beetles, roaches, and other insects. 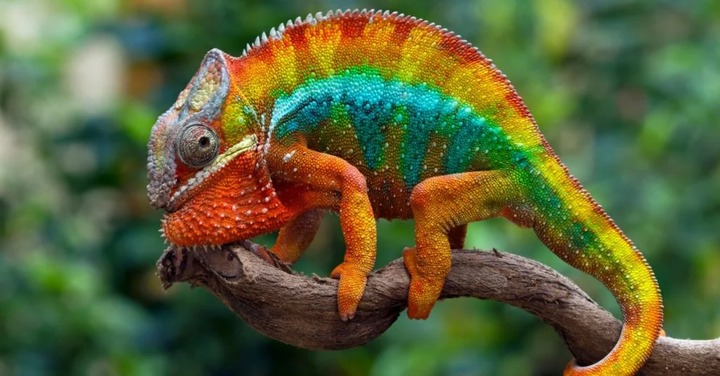 If you’ve never heard of a golden bat, there’s a reason. This colorful creature is a brand new member of the species.

A researcher in Bolivia discovered a new bat species in 2014. This striking animal is the beautiful Bolivian golden bat (Myotis midastactus).

As its name implies, this bat has thick, fluffy fur that looks golden. It is one of six bat species discovered by wildlife scientist Ricardo Moratelli.

The small, striking bat is endemic to Bolivia and is a so-called mouse-eared bat. Moratelli named the colorful bat midastactus after King Midas, the mythical king who turned everything he touched to gold.

The golden bat’s conservation status is unclear, and there are none currently in zoos. If you want to see one, you’ll have to visit the forests of Bolivia.

The colorful bird is also known as the rainbow finch or Lady Gouldian finch. Its name comes from the British ornithological artist John Gould, who named it in honor of his wife Elizabeth.

Gouldian finches have seen a dramatic decline in their population numbers. Biologists believe this is because they’re susceptible to illnesses. Habitat loss is another factor. Their status is “near threatened.”

You can see Gouldian finches at Zoo New England and the San Diego Zoo. 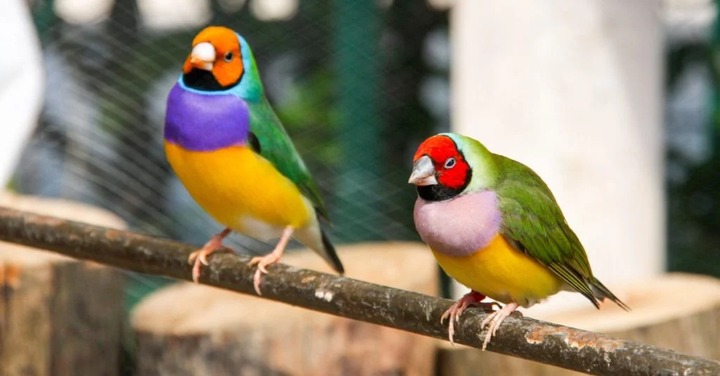 One of the brightest animals in nature, the tiny blue dart frog (Dendrobates tinctorius) is sapphire blue with darker blue spots and legs. With an average length of two inches, it’s a small but deadly amphibian.

Like all dart frogs, it is highly venomous. In fact, a dart frog’s color shows how potent its poison is. The golden dart frog, for instance, is highly colorful and is also the most venomous member of the species. It has enough venom to kill 10 adult humans.

Blue dart frogs are active in the daytime. They live in piles of fallen leaves on the forest floor. Although they like to be near streams, they lack webbed feet and can’t swim.

You can see blue dart frogs at the National Aquarium in Baltimore, the Toronto Zoo, and Tortuguero National Park in Costa Rica. 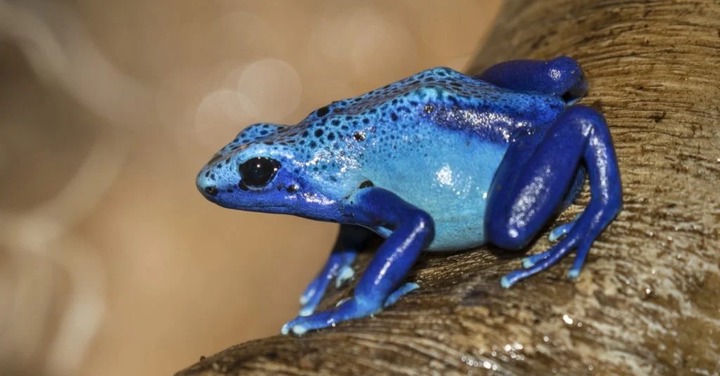 The resplendent quetzal (Pharomachrus mocinno) is native to Mexico and Central America. Its name comes from the Aztec word “quetzalli,” which means precious or beautiful. This stunning bird is the national animal of Guatemala and an important cultural symbol in many Central American countries.

The resplendent quetzal has bright green feathers and a scarlet chest. It’s known for its unusually long tailfeathers, which are in various dark green shades. It is a protected species that are listed as “near threatened” because of habitat loss.

Most quetzals die in captivity. ZooMAT in Chiapas, Mexico, and Rescate Wildlife Center in Costa Rica are the only sanctuaries that have successfully held quetzals in captivity and even bred them. Bird watching tours to their sanctuaries are the best ways to see them live. 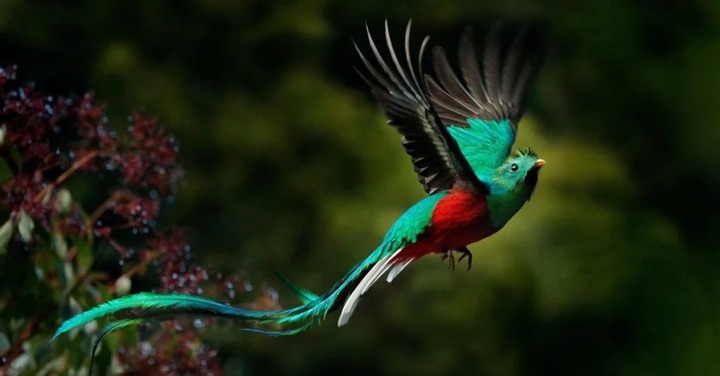 This lovely insect (Dryocampa rubicunda) looks like it’s wearing a soft, fluffy, pink and yellow jacket. With its matching pink legs and yellow antennae, this moth is a true stunner.

As its name implies, the rosy maple moth prefers to live in maple trees, but it will nest in oak trees if there are no maples around. Its range is wide in North America. Its northern range includes the eastern United States and Canada. Its southern range runs to Florida, and its western range extends as far as Texas and Minnesota.

These colorful moths are not endangered, and you may get a chance to see them in your yard or a neighborhood park. Rosy maple moths lay their eggs in maple trees and oak trees. They’re active during the evening hours. 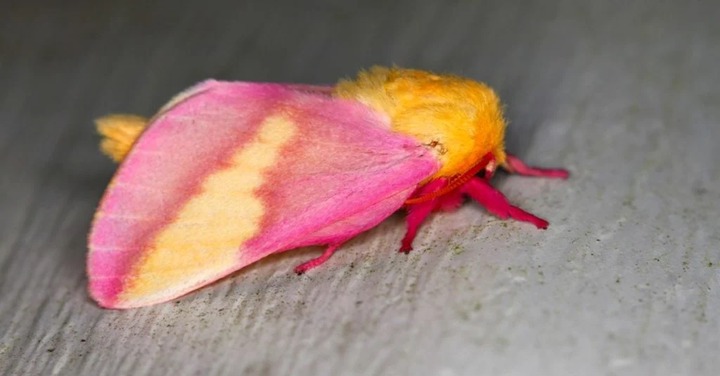 This stunning bird (Coracias caudatus) has a pale lilac chest, turquoise tail feathers, and dark blue wings. Native to sub-Saharan Africa, it is also the national bird of Kenya and Botswana.

Lilac-breasted rollers are migratory. They travel to warm climates every winter. They prefer to nest in open woodland areas and savannahs. They enjoy perching on top trees or poles, where they make a colorful sight as they hunt for insects, snails, and lizards on the ground. 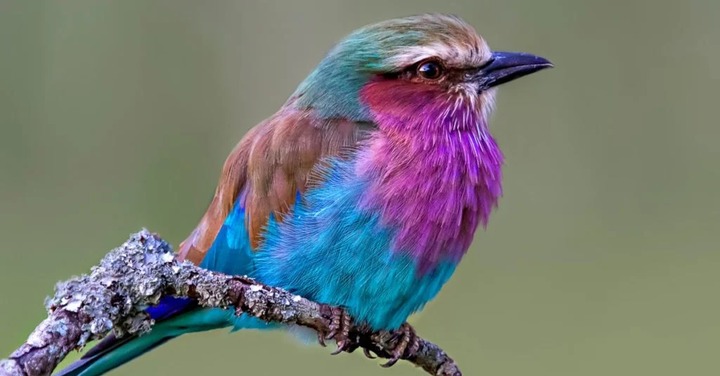 Many tropical birds are colorful, but scarlet macaws stand out for their size and their brilliant red coloring. These birds are mostly red with mixed feathers of bright blue, yellow, and green.

Scarlet macaws (Ara macao) are native to South America and Central America. Standing 3 feet tall on average, they’re one of the biggest members of the macaw family. Their loud, howling calls are a familiar sound in the tropical jungles.

Scarlet macaws are not endangered, but habitat loss and poaching have caused severe declines in the scarlet macaw population. 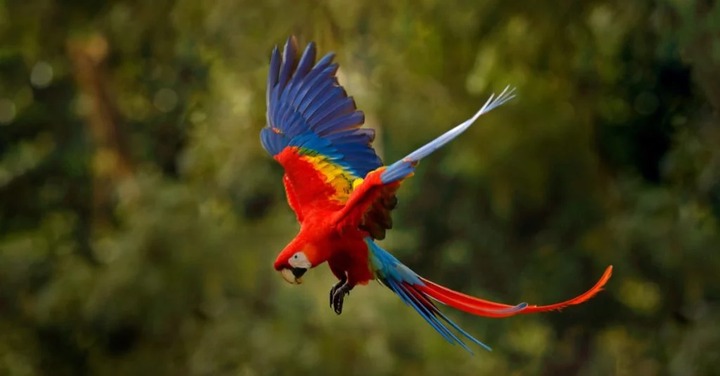