Ever wondered what insect might have the most painful sting? You’re probably thinking there isn’t a definitive answer. Some people might think a hornet has a more painful sting than a harvester ant, but how would they know if they hadn’t been stung by both of them? So there isn’t really a way of ranking the pain of all the various insect stings without getting stung by all of them, and no one is going to do that, right?

The sweat bees (Lipotriches sp.) are a group of small bees which are attracted to the salt in human sweat. Whilst, like other bees they feed on flower nectar, they also like to top up on the salt and minerals found in sweat (and I thought they were just friendly!) They are common throughout the world and come in a variety of colors, including metallic green as pictured.

Being attracted to sweat they can be somewhat of a nuisance and they will sting if squashed against the skin. Whilst this can trigger an allergic reaction it is, as you can see, a fairly mild sensation. 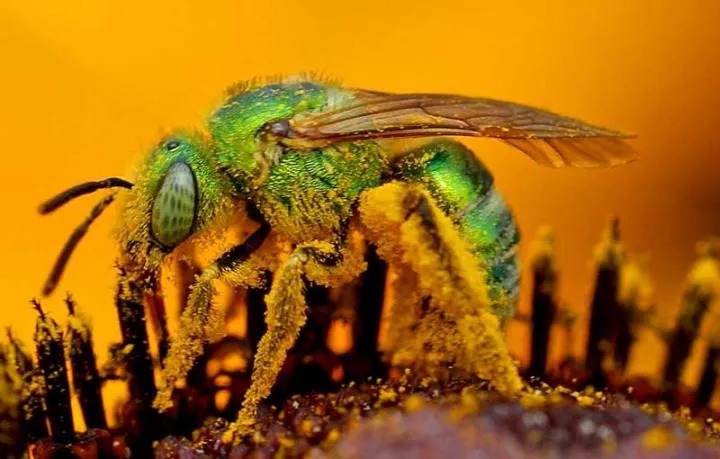 There are around 300 species of fire ants (Solenopsis sp.) around the world and many species are referred to as red ants. These are small ants, measuring between 2-6mm but they make up for this with an unpleasant sting. This is where the ‘fire’ part of the name comes from.

The ants sting by gripping with their powerful jaws and injecting their venom with a dedicated sting. One sting is mildly painful, resulting in a raised red bump. However, most cases involve multiple bites causing significant pain and an increased possibility of infection. 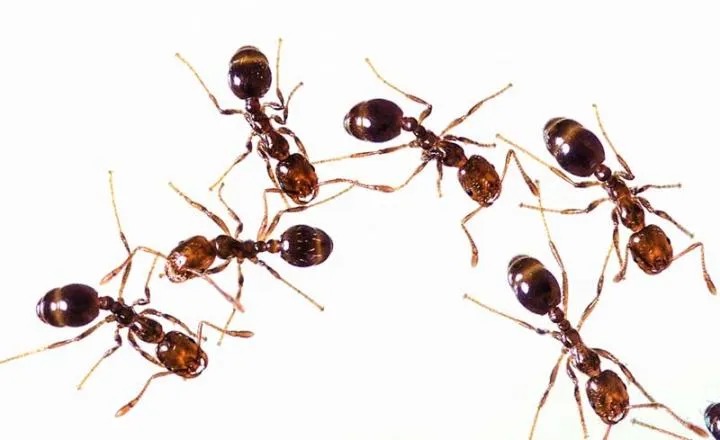 The Central American bullhorn acacia ant (Pseudomyrmex ferruginea) is wonderful example of a symbiotic relationship between tree and ant. The ants protect the tree from other insects and in return get a place to live and source of food. They live inside the large thorns that grow on the bullhorn acacia tree.

The acacia ant is highly aggressive and defends the tree by attacking animals of all sizes; from other insects up to foraging goats. Whilst the ant itself is small their sting is pretty potent causing a prolonged burning and throbbing sensation. 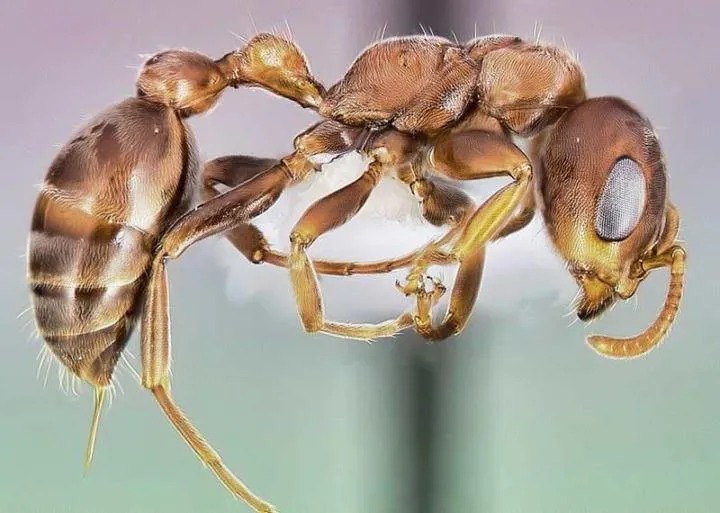 The name hornet alone fills many with fear, but this fellow is actually not a real hornet but a monochrome yellowjacket or wasp. The bald-face hornet (Dolichovespula maculata) is found throughout North America where it forms large ‘paper’ nests containing up to 700 individuals. It is pretty big by yellowjacket standards and also seems quite angry.

These wasps become particularly bothersome in late summer when they are keen to invite themselves along to picnics. The sting is pretty painful and they are not shy about using it, repeatedly. 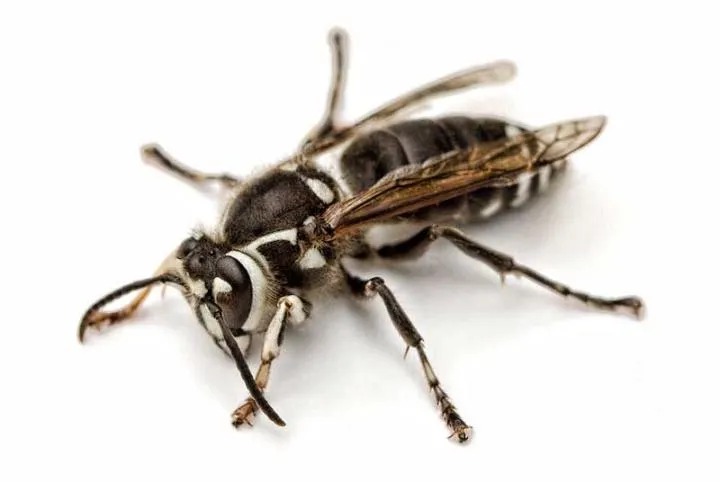 Known as the yellowjacket in America and the wasp in other countries Vespula sp. are universally regarded as a pain in the ass – literally in my own case. The paper nests can often be found in attics or even underground in old rabbit holes and can contain many thousands of individuals.

As with other wasps yellowjackets are able to use their sting multiple times. Bees on the other hand die after using theirs. This means that whilst both groups will happily sting to defend their nests, wasps will also sting in defense – or just for the fun of it if you ask me. 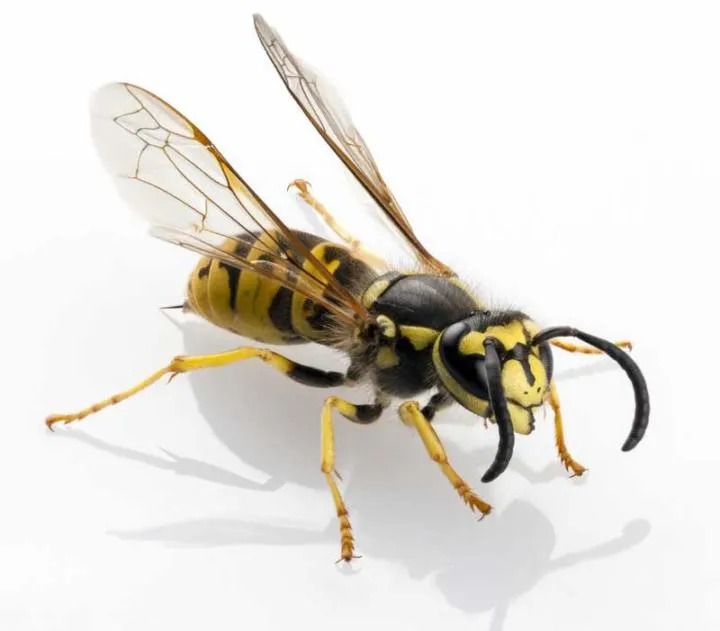 Just pipping the run of the mill wasps is the honey bee (Apis mellifera). Found throughout the world this lovely little bundle of fluff is responsible for producing, you guessed it, honey. How the honey is made is a different matter; it is basically nectar eaten and regurgitated over and over until it’s good to go. In case you didn’t get that, what I’m saying is honey is bee vomit! That’s fine for bees to use as a food store but I’m now wondering if I’ll enjoy honey quite as much from now on.

Anyway, on to sting. Whilst generally pretty cool about stinging, bees are highly defensive about their nests and their honey. Unfortunately for both sides, when they do sting they leave behind the barbed sting, along with a proportion of their insides, including the still pumping venom sac. This is an unpleasant death for the bee, but also pretty painful for the recipient of the sting.

The notorious Africanized “killer” bee (Apis mellifera scutellata) is a sub-species of honey bee. Whilst they produce more honey they are highly aggressive and have caused fatalities when swarming. Reports indicate they will pursue a victim for over a mile and can remain angry for days after. 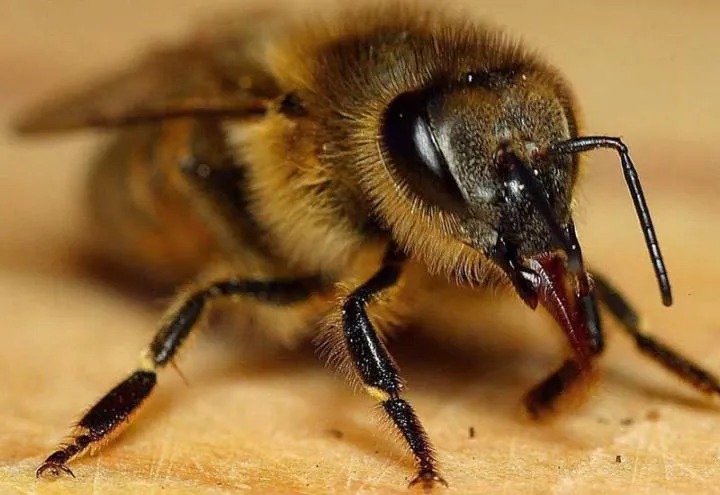 And so, up to the next level of pain… The Red Harvester Ant (Pogonomyrmex barbatus) is native to the southern US. It is a large ant with powerful jaws which it uses for cracking seeds open. Their nests are easy to spot as there will be a hole in a small mound surrounded by nothingness – these ants are reknown for destroying large areas of vegetation around their nests.

The painful sting is way out of proportion to the size of the creature. It is said that the venom is as potent as the most poisonous snakes in the world. Fortunately the dose delivered is so small that it would take about 1,000 bites to kill you that way. Given the intense pain from a single sting, no one is going to hang around that long!

What is truly bizarre about the harvester ant is that these are the ants favoured in toy ant farms. Apparently its because they don’t have the sticky stuff on their feet to climb out and they dig nice tunnels. If one did escape though it could quickly end any budding interest in ants. 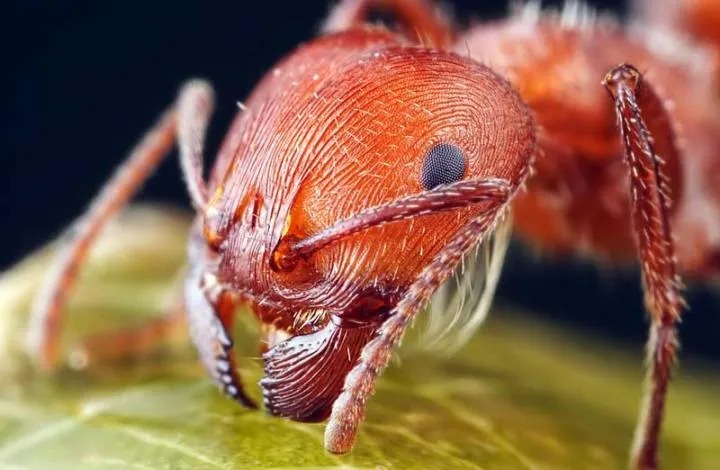 The paper wasp (Polistes dominula) belongs to a different branch of the wasp family. Found throughout Europe, this species has also been introduced to North America where it has had little trouble displacing local wasp species. Nests can often be found in the eaves of roofs or in attics and are characterised by their small open cells containing larvae. The paper wasp is generally larger than other wasp species and has a sting to match.

That said, it is not quite as aggressive as some wasps. However, once in attack mode it will deliver repeated, agonising stings.

The sting of the Tarantula Hawk (or Pepsis wasp) is major league. This one is only for real connoisseurs of pain. The creature itself is the stuff of nightmares; at 5 cm (2 in) long this is one of the largest wasps. The sting alone can be 7mm (1/3 in) long – that’s a flying syringe! But that is nothing compared to how this beast earns its name.

The Tarantula Hawk can often be seen perched on flowers, sipping nectar, for that is what it eats. However, once in a while the female wasp feels the need for meat. Spider meat. And not just any spider. She’s looking for the biggest, hairiest spider around.

Once she has located her hand-sized spider victim she does battle. Grabbing the spider she will stick it with her sting, which paralyses the spider, and drag it back to specially prepared nest. Here she lays a single egg within the spiders abdomen.

When the egg hatches some days later it gorges itself on the still living spider’s insides. The larva will save the spider’s vital organs until last so keeping it alive and fresh. Who needs fridges?!

The harpoon-like sting the Tarantula Hawk comes armed with is not just effective on spiders. It is infeasibly painful. There is a new level of pain – debilitating agony which can render a person incapable of doing anything for several minutes.

“…immediate, excruciating pain that simply shuts down one’s ability to do anything, except, perhaps, scream. Mental discipline simply does not work in these situations.”

After the Tarantula Hawk it is pretty difficult to imagine anything could possibly be worse. I mean, that scores 4 out of 4 so where do we go from here? 4+ is the answer. The very limits of human pain.

And what could be responsible for this level of pain? A hornet the size of an eagle? Well, no. An ant from the forests of South and Central America.

Paraponera clavata goes by several names; the lesser giant hunting ant, the conga ant, 24 hour ant, but most know of it as the bullet ant. The name actually comes from reports that the sting hurts as much as being shot!

As far as ants go the bullet ant is quite big and powerfully built, but nothing can hint at the pain proffered by that sting. I have just watched a video of a grown man being reduced to tears after being stung by bullet ants. The pain has been described as “waves of burning, throbbing, all-consuming pain that continues unabated for up to 24 hours“, which kind of makes you wonder why anyone would volunteer to be stung by one, or more of these critters.

In the initiation rites of the Satere-Mawe people of Brazil bullet ants are placed in gloves which must be worn for 10 minutes. And it isn’t just a one off. To become a warrior a boy must do this many times.

Schmidt’s is quoted as saying “WOOH!” during his experience with bullet ants, at which point he sat down to “savor the experience”. After being stung some more he was a shaking wreck and decided to head to the nearest tavern to try and drink his way through the pain. 12 hours later the pain was still coming in waves. But he lived to write it all up.

Improve your lung health during covid times, heres how