About Lake Fundudzi in Limpopo province

By LufunoSenyela (self media writer) | 16 days ago 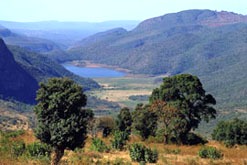 The enchanted body of water known as Lake Fundudzi is a sacred lake of the Venda people that lies in the heart of the Soutpansberg region and is one of the few true inland lake systems in South Africa.

Lake Fundudzi can be found on the R523 between Thohoyandou and Louis Trichardt, surrounded by the mythical Thathe Vondo forest - so full of spirits that few Venda people venture into it for fear of hauntings and a lightning bird called Ndadzi.

Trips to the lake shore are traditionally rarely granted visitors, which is probably just as well as it is said to be infested with crocodiles. So sacred is the lake that newcomers must turn their backs on the lake and view the water from between their legs, according to the ritual after which the lake is named.

Fortunately, one of the most spectacular views of the sacred lake is found on the approach in the surrounding mountains, so visitors don’t have to lose out.

The lake has no obvious outlet and is formed from water off the Mutale River, where a giant python god of fertility is said to reside. He demands an annual sacrifice of a maiden every year, and the ritual domba dance - part of the initiation rites of young women - can be viewed by getting permission from the local custodians of the lake known as the ‘people of the pool’.

The respect for the lake and the taboos that disallowed visits have meant that the lake has survived in quite good condition, although long-held traditions are not sustained with quite the same authority as before and general lack of regard is fast leading to the lake’s general erosion. Deforestation, agriculture and development are causing the lake to silt up, although a local project is busy rehabilitating the area.