Top 10 Weirdest Animals in The World

The glass frog is strange because its abdomen is transparent. Therefore, you can see its internal organs. Viewers can see the heart pumping blood into the arteries and food moving through the stomach and intestines.

These animals that live in tropical rainforests, like those found in Belize, Costa Rica, Colombia, Guatemala, Honduras, Mexico, and Panama, also are unique because males guard the nest until the eggs become tadpoles while the mother is nowhere to be found. Guarding the nest can be challenging work because carnivorous wasp love to feed on these rainforest eggs. Male glass frogs their long back legs to kick the wasps away. 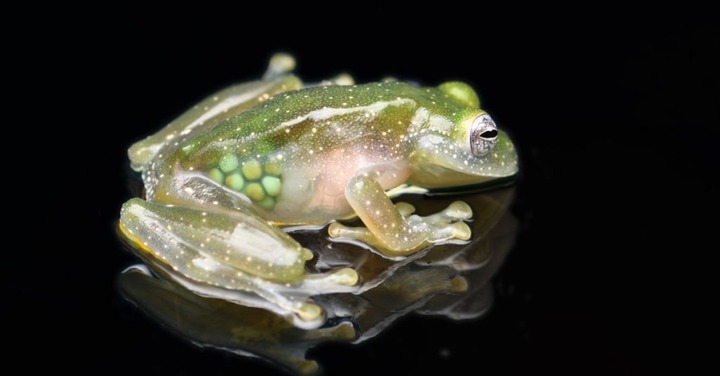 If you are diving in the waters off the south and central Australian coast and see something resembling a twig in the seas, you may want to pay attention because it may be a leafy sea dragon. While sea dragons look like a twig, it does not use these body parts to move through the water. Instead, it has two minuscular fins that are almost transparent that it uses to propel itself.

Male leafy sea dragons have a unique sticky area under their tails where the females lay their eggs. Then, the male carries the eggs for about 5 weeks before releasing them into the water. 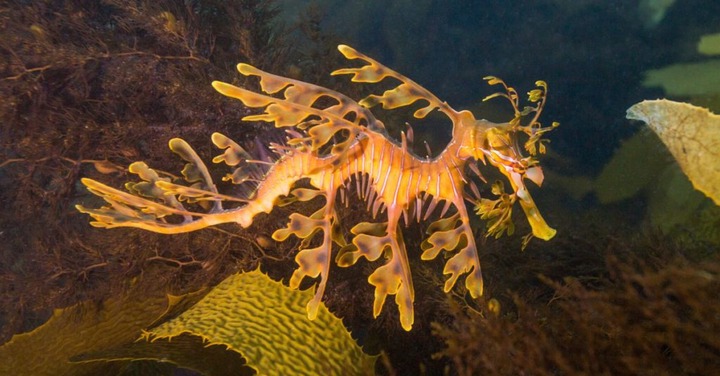 8. Okapi – Cousin of the Giraffe

The strange coloring pattern on the okapi makes you wonder if this animal is a species of deer or zebra, but okapis are the only living relative of the giraffe. You can see the resemblance in the okapi’s head. These animals that live in the Ituri Forest, a dense rainforest in the Democratic Republic of the Congo, rely on their hearing to warn them when danger is nearby.

Scientists believe that the white stripes on the okapi’s hindquarters and front legs may make it easier for calves to follow their mothers, adults to find each other and helps camouflage them from their predators.

While they can walk within 30 minutes of birth, calves do not defecate until they are about 6 weeks old so that the smell does not attract predators. 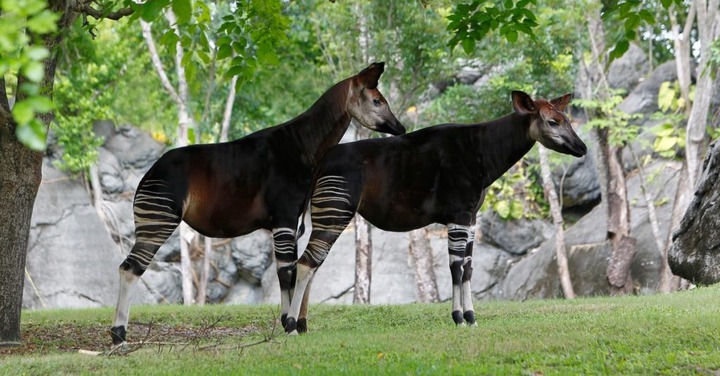 The East Africa gerenuk has an extremely long neck, but these animals are also strange because of their ability to rear up and stand on their back legs. This gives the animal the ability to pluck birds from trees and eat plants other animals cannot reach. When standing on their rear legs, they can be up to 6 feet tall.

This member of the antelope family has proven difficult for zoos to raise because of their shy nature and their unusual dietary requirements. These desert animals seldom drink water. Instead, they rely on their diets to provide the liquid that they need.

Male gerenuks have unique s-shaped horns that curve backward over their bodies that can be up to 17-inches long, while females have straighter horns. When a male senses that a female is ready to breed, they mark her with special secretions from scent glands beneath his eye before kicking her several times Then, they engage in sex. 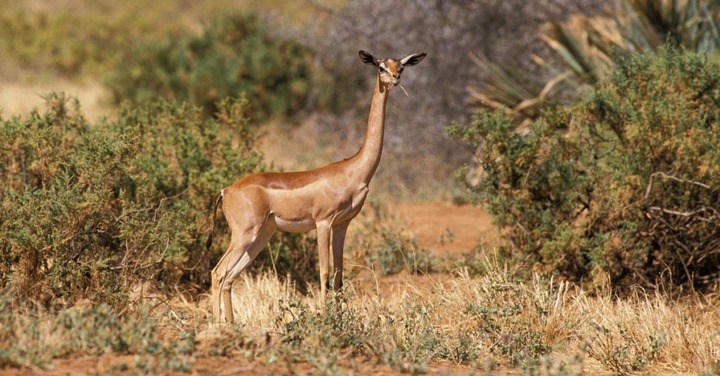 The unusual spiral horns on the markhor can grow to be 5 feet long on mature males. Females of this species that is the largest of the goat family, live in herds of 50-to-100 animals. This Himalayan animal has extremely wide hooves, which it uses to step on snakes and kill them. Their broad hooves may also help them keep their footing.

Further making markhors look weird, males have thick, long beards of dark hair, gray-and-white manes, and tufts of pale-colored hair on their legs while females have only very short beards. Like horses, the length of the coat varies by the season. A broad dark brown dorsal stripe runs from the shoulders to the base of the tail. 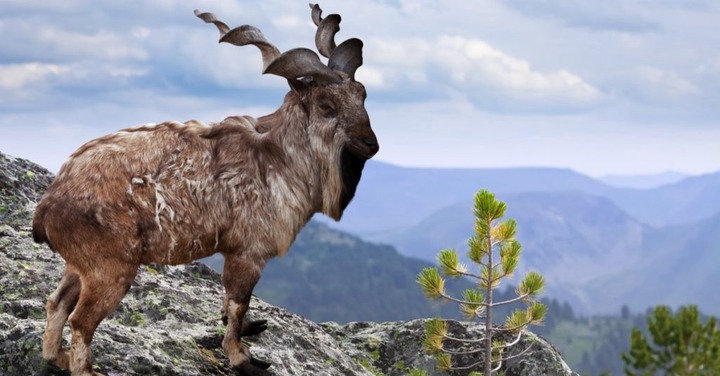 Besides the platypus, the echidna is the only mammal to lay eggs. This member of the anteater family lives in Australia, Tasmania, and Papua New Guinea, where it is a solitary animal that is active during the day and evening. Echidnas have tiny eyes, and it does not see well. It compensates by having keen hearing and a great sense of smell. The body of the echidna is covered with beige-and-black spines, similar to porcupines.

This animal has an unusual foot because its second toe is exceptionally long. It uses this claw to comb through its body to collect bugs to eat. The echidna’s short legs are extremely powerful so that it can dig into the ground quickly.

When it senses that predators, like dogs and cats, are nearby, it quickly digs a hole in the ground. It digs straight down until only the very tip of its tail is showing above ground, and it stays there until the danger has passed. 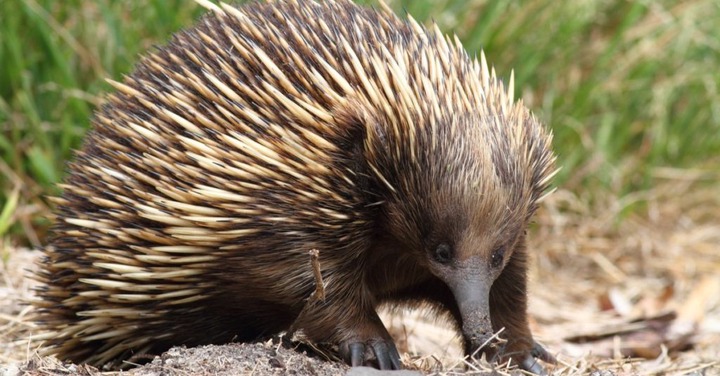 Except for primates, the kinkajou is the only tree-dwelling mammal. These animals can turn their feet around so that they can efficiently run backward. While the kinkajou’s body is only about 20 inches long, its tail can be as long as its body. It uses its tail to cover up while it is asleep. You may be able to spot this Central and South American animal that is a cousin to raccoons hanging upside down near the top of trees. It uses its long tongue to steal honey from bees as its primary food source. Therefore, this animal is sometimes called a honey bear.

Females give birth to one young annually, which are like kittens as they are born with their eyes closed. They are not able to see until they are about a month old. 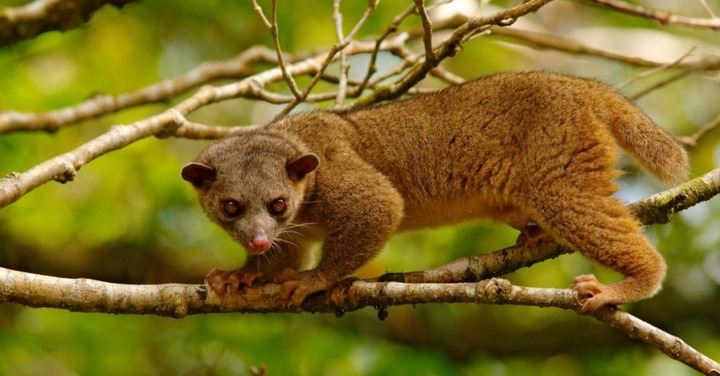 While many birds, like the mockingbirds, thrashers, and catbirds, can mimic the sounds of other birds, the lyrebird is unique because it can mimic environmental sounds. While most birds have a four-part syrinx that they use to produce their songs, Australia’s lyrebird only has a three-part one. Scientists are unsure if this rare simplification allows them to make unique sounds, like chainsaws and cameras clicking, or not.

This ground-dwelling bird is also superb for the environment. As it uses its specially designed feet to rake through leaf litter, it moves up to 352 tons of earth each year. That is the equivalent of about 11 dump truck loads. That is more than any other animal on earth, including gophers, moles, and earthworms. Their digging hastens natural decompensation, which is key to a healthy forest. 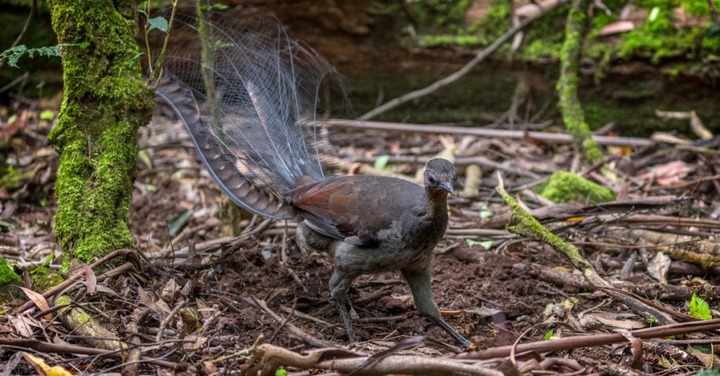 Often called fainting goats, myotonic goats have a unique defense mechanism. These animals fall when they are scared, and their limbs become rigid. When you hear a sudden noise, your muscles naturally tighten for a second before relaxing. Myotonic goats are born with a rare condition called Myotonia congenita. When they get scared, their muscles do not relax, so they topple over. This breed of goat comes in a variety of shapes and sizes. The breed was developed in Tennessee by farmers who found them easier to keep in fences than other goat breeds. 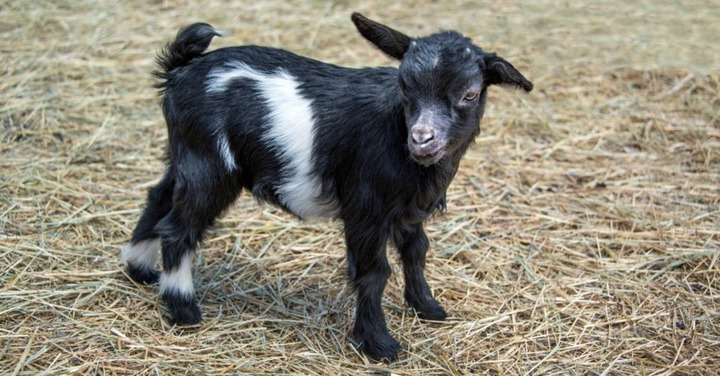 The blue glaucus, also known as the blue dragon, is a mollusk found in the Atlantic, Pacific, and Indian oceans. The blue dragon floats through the water on its back, and it uses an air bubble on its stomach to keep it swimming. This animal has a rare feeding and protection pattern that it uses while floating the sea in groups, called fleets. It uses venom to kill other venomous marine life that is often several times its size. Then, it uses its radular teeth, like a serrated knife, to cut the animal into bite-size pieces. While dining, it collects the venom from its food, which it then uses to kill its next prey.

While they are usually found in the ocean, wind can blow them onshore, which kills them. Even then, they can release their venom if someone steps on them or chooses to pick one up. Researchers are not sure how many blue glaucuses are in the world, but they think that warming oceans and more storms allow them to expand their territory. 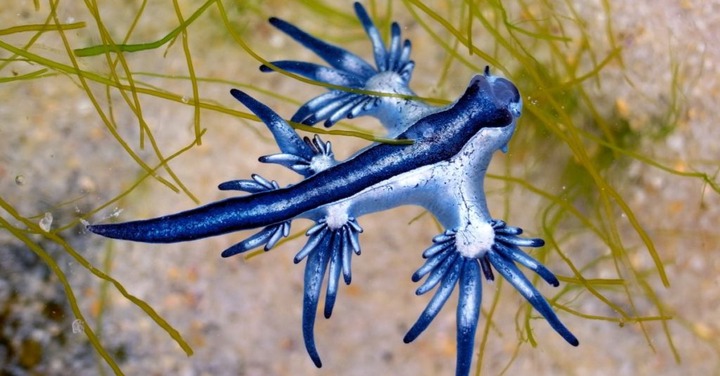