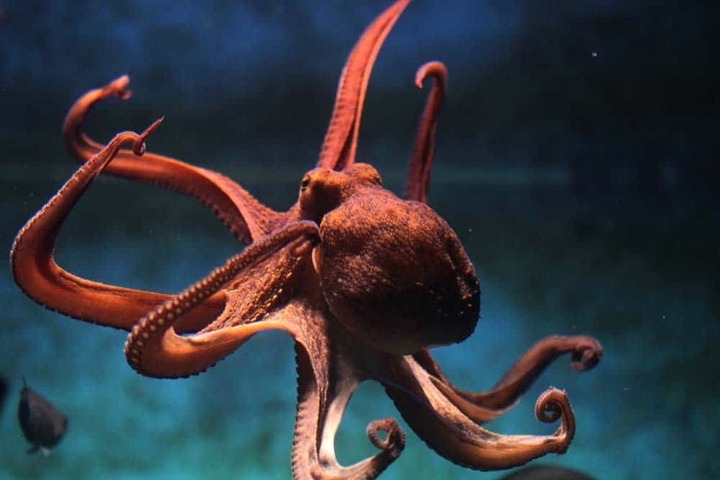 Raccoons may gravitate to the garbage, but they’re also super smart. In the early 20th century, research conducted by ethologist H.B. David proved that raccoons are expert lock pickers who can easily recognize moved or rotated devices! “Trash pandas” also boast incredible memories and can remember puzzle solutions for up to three years!

When a team is comprised of 50,000 individuals working shoulder to shoulder, democratic decision making and delegation are vital. And it’s those qualities that keep honey bees alive and thriving. The genius insects have perfected the art of cooperation, landing them on our smartest animals on Earth list.

They’re also non-violent — another intelligence indicator. For example, when scout bees disagree about new hive locations, they have a dance-off instead of fighting to the death! How civilized — and fun!

Once upon a time, an octopus named Otto lived at a German aquarium. Mellow and chill, Otto wasn’t fond of the facility’s bright lights, so he took matters into his own…tentacles…and sprayed water on the overhead lamps to short-circuit them! Otto also threw rocks at the glass when he wasn’t feeling famous and wanted some alone time. Octopuses, they’re just like us!

Otto isn’t the only intelligent octopus. Individuals of the species have proven time and again that they’re masters at solving puzzles and escaping captivity.

Have you ever played the game memory? The winner matches the most tiles by best remembering where everything is on the board. Well, guess what? If you ever played memory with a pigeon, you’d probably lose and lose hard! A study revealed that pigeons can hold over 700 images in their heads at a time!

Moreover, before the electronic age, when telegrams were a sci-fi fantasy, militaries used pigeons to ferry messages between posts. Basically, pigeons are Mother Nature’s GPS droids.

Pigs are super smart. They easily navigate mazes, understand emotions, learn sign languages, and even have best friends with whom they prefer to spend time! Believe it or not, baby mud dabblers are smarter than baby humans! Point of fact: piglets master self-awareness faster than infants. Plus, little pigs know their names by two weeks old! It takes humans a few months.

Humans have a 1/40 brain-to-body-size ratio; dolphins have a 1/50 one. What does that mean? Well, it’s complicated. But for our smartest animals on Earth list, it means dolphins are wicked intelligent.

Dolphins are so smart they can mimic humans — and they even know how to cheat! Kelly, a research dolphin at the Marine Mammal Studies lab in Mississippi, hoodwinked her way to more treats during an action-reward drill. During the observational period, trainers taught the dolphins to exchange pieces of trash in their tanks for food. Kelly caught on pretty quickly and gamed the system by ripping her “trash” into multiple parts to double her culinary rewards!

The Isaac Newtons of Birding World, crows know physics! OK, they may not be proficient in binomial theorems, but they understand how water displacement works, which is a lot more than other animals can do! Crows also plot new flyover paths to avoid trigger-friendly humans that hunt crows during migratory season.

Elephants rank among the largest terrestrial mammals, and they’re also some of the smartest animals on Earth! Famously, the pachyderms have incredible memories. Not only can they remember watering hole routes hundreds of kilometers long, but they also recognize each other after years of separation.

Take, for example, Jenny and Shirley, who both ended up in a Tennessee elephant sanctuary. The moment their eyes locked, the two ladies did the elephant equivalent of running towards each other with arms wide-open. It turned out they had briefly traveled in a circus together 22 years earlier!

Chimpanzees are a lot like humans. They learn verbal languages, mourn the passing of loved ones, and make tools. Also, like humans, their intellectual prowess is determined by both genetic factors and environmental ones. To learn more about our remarkable cousins, head over to the Jane Goodall Foundation website.

We don’t mean to boast, but humans take the smartest animal cake. We have superior reasoning abilities and can manipulate environments in astounding ways. However, if humans were better able to communicate with other animals, we might just discover they think we’re the dumbest species on Earth!

PHOTOS: This is Zimbabwean city that got people talking, See what they are saying

Here Is Why Online Hate Speech Is Bad In South Africa.