How errant lion was killed and eaten by community

By Basitopeyemi (self media writer) | 5 months ago

After the lion had been shot, however, there was a lot of drama since the people were not content with the lion's death. As a result, they were able to overpower UWA employees, skin the animal, and then share the meat. 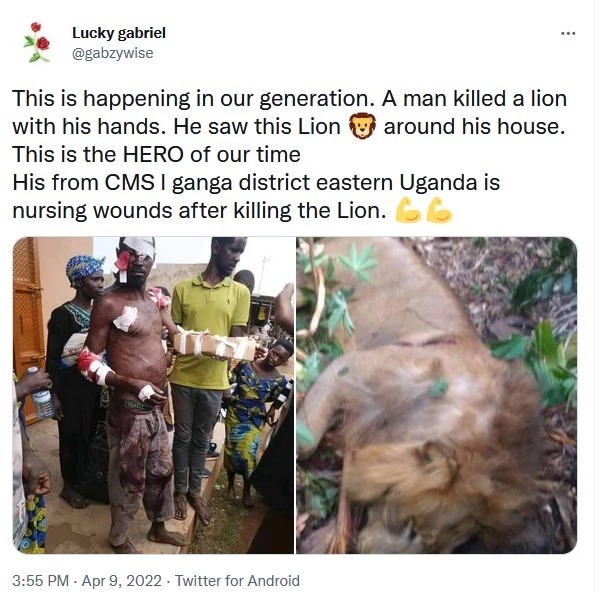 In Kagadi, a lion injured one of the people.

In Kagadi, a Lion attacked and injured one person

When an image of an injured guy appeared on Twitter on Saturday, March 9, it sparked a debate about whether or not it was possible to fight and kill an animal using only one's hands.

A picture of a man who was injured by a lion went viral.

Pictures of a lion attack victim have gone viral.

The Uganda Wildlife Authority responded to the images and provided an explanation (UWA).

People and livestock in two villages in Mpeefu sub county, Kagadi district, were attacked by a lion on Friday; the incident killed several livestock and injured several people. In revenge, the villagers pursued the lion in an attempt to disable it before UWA officials and a few UPDF soldiers arrived to save them and killed it.

As soon as the lion had been shot and killed, however, the locals felt unsatisfied with only the death of the animal.

It was immediately skinned and shared among the groups who had been following the lion." Even though they begged, the throng eventually overpowered the UWA officials and the carcass was left to rot. The skin and the head of the carcass were transported to the police for documentation and further investigation," UWA said on Saturday.

"We send our sympathies to the communities hurt by the lion during the hunt and those who lost their domestic animals to the lion whose provenance is still to be confirmed," UWA said. Injured members of the UWA will receive medical attention from the organization.

This was the lion's last meal.

a lion that had been slain and eaten by humans

What started it all

On Saturday, UWA made a statement claiming that the DPC Kagadi had given them information on the runaway lion. A team of UWA employees in the area got in touch with the DPC and traveled to Rwabaragi hamlet, where the lion was last seen, together with the DPC and other police officers. The goal was to evaluate the situation and, if necessary, catch the lion.

When UWA employees and police arrived in the area, they were met by a swarm of people searching for the lion with machetes, spears, and big sticks because it had already hurt three persons in the vicinity.

It was already irritated by the presence of a large gathering of people who were set on killing the lion." More and more people arrived because of the commotion and alarm caused by the problem animal, despite the fact that our employees and police had been ordered to address it. UPDF soldiers under the command of Lt. Col. Lubega James of the first division Kyeterekera UPDF Battalion in Kagadi joined the search team immediately thereafter, according to a statement released by UWA on Saturday.

When Cpl. Amodoi Moses saw the lion and tried to kill it, it attacked him, wounding him, before his colleague was able to get the shot off.

A toll-free phone number has been provided by the Authority for reporting incidents of animal cruelty: 0800100960.

Content created and supplied by: Basitopeyemi (via Opera News )