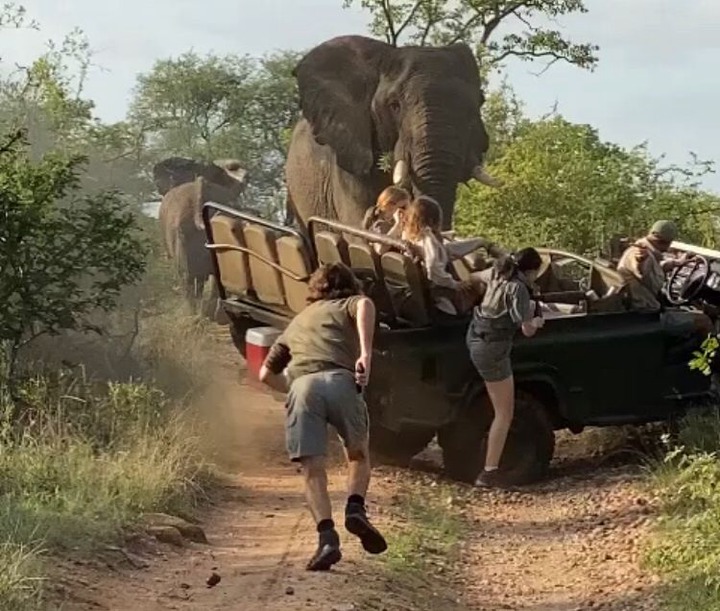 The vehicle's passengers rushed for shelter, and no injuries were recorded.

The event occurred at the Selati Game Reserve, according to a statement issued by the wildlife guide training organization EcoTraining on Monday evening.

According to the firm, elephant bulls in musth have high amounts of testosterone and may exhibit violent behavior.

"The EcoTraining teacher and students were on a normal exercise when they came upon a breeding herd of elephants." The car came to a halt to view the elephants and allow them time to calm down.

"An elephant bull from the breeding herd mock charged the vehicle and mock charged again as they went ahead slowly," said EcoTraining MD Anton Lategan.

He stated that as the truck came to a halt, the trainees were transferred to a nearby second vehicle. The group's two professors had a combined 25 years of expertise in the subject.

Someone in the second car captured video of the event, which has now gone viral on social media. EcoTraining stated that it did not know who filmed the video but confirmed its veracity.

"Though the car was damaged, luckily none of the occupants on the vehicle were wounded," Selati Game Reserve general manager Bryan Havemann said after visiting the site.

Everyone engaged in the event was counseled.

Animals Gone Wild : White Couple Watches In Horror As Elephant Does This To An SUV