Top 9 Most Interesting Animals in the World

Hydras are tiny animals that live in freshwater. They not only have a weird reproductive cycle but they can regenerate their tissues and do not seem to age, even though they can die.

Hydras can reproduce sexually or asexually. When times are flush, they simply grow buds that eventually snap off and grow into other hydras that are clones of their parents. However, when food is scarce or the climate inhospitable, they reproduce sexually. They produce ovaries, testes, or sometimes both on the same individual. The testes release sperm into the water that eventually fertilizes the eggs in the ovaries of another hydra. These fertilized eggs develop a tough coat, and when the adult dies these fortified eggs sink to the bottom of the body of water and wait for conditions to improve. When they do, the egg hatches into a hydra nymph. 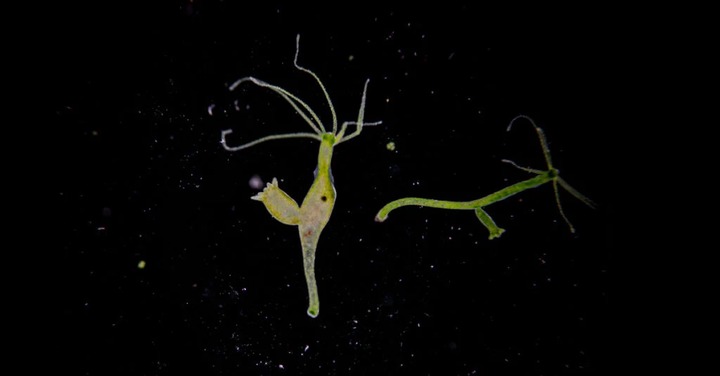 The kakapo, which is only found in New Zealand, is the only flightless parrot in the world. It is a large, nocturnal bird, with a length of 23 to 25 inches and a weight of between 2 and 9 pounds. It has a facial disc that makes it look somewhat owl-like, and so has the other name of owl parrot. Yet its wings and tail are short, and it lacks a keel on its breastbone. Its fluffy feathers are olive green and mottled with brownish-gray or black, which allows it to blend into its forest home, where it lives on the ground. The bird, which can live to be 100 years old, was widespread until the arrival of humans and the predatory animals they brought with them. Now, the kakapo is critically endangered and is only found on New Zealand’s Codfish and Anchor Islands. 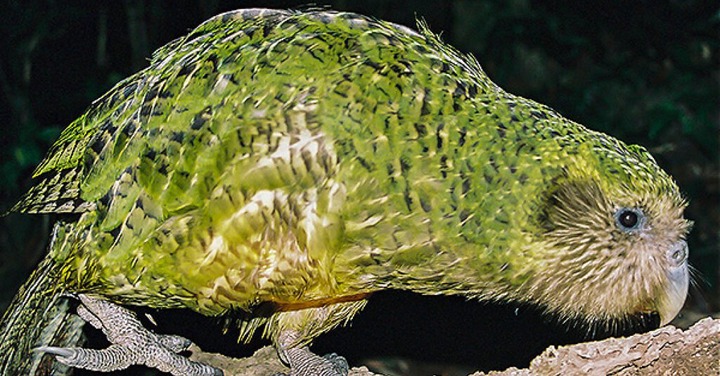 Who isn’t fascinated by the platypus, a mammal with a duck’s bill that lays eggs and whose males have venomous spurs on their back legs? Not only this, but the platypus and its equally weird fellow monotreme, the echidna, can find prey by sensing electrical fields. They are the only mammals that can do this, not counting the Guiana dolphin. The platypus does this through receptors in its bill. Its tiny eyes are more like those of a hagfish than a mammal and have double cones. The animal also glows blue-green while under black light.

While the female has two ovaries, only the left one works. When her babies hatch out of their eggs, they aren’t fed milk from teats, which the mother doesn’t have, but from dermal pores. The babies are actually born with teeth but lose them. Grown platypuses use tough plates in their bills to grind up their food. People used to eat their tails, which are full of fat. 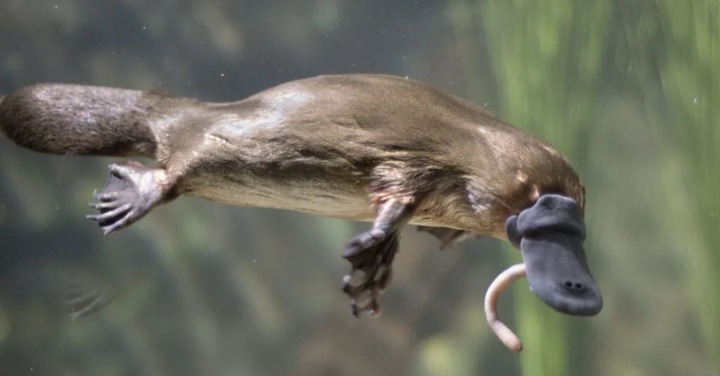 This creature, which looks like a cross between a large rat and a shrew, is found in the forests and shrublands of Haiti and the Dominican Republic. It is one of two land animals that are native to the island of Hispaniola. The solenodon has a body that ranges between 19 and 28 inches in length and a nearly naked tail that can be nearly 10 inches long. It weighs a bit less than two pounds. It is fossorial and comes out at night to eat small animals, including insects, worms, and mice. The female has two teats, on her back, near her rump. But the really fascinating thing about the solenodon is that it is truly venomous. The venom delivered by a solenodon can kill a mouse in a matter of minutes. Though it won’t kill a human, the bite of a solenodon is very painful indeed. 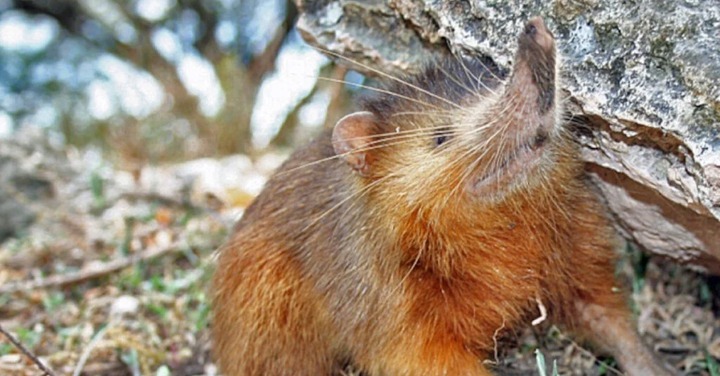 Is this Indonesian animal, the world’s largest monitor lizard really venomous? Some biologists claim that it’s not but that its saliva is so filthy with bacteria that a bite inevitably sends the victim into septic shock and kills them. Whether the lizard is truly venomous or not, it is an ambush predator that usually doesn’t let its prey go off and die the way a venomous snake does but tears out its throat and lets it bleed out. Then, the dragon will either tear off and swallow chunks of the prey or swallow it whole if it’s small enough. If a group of dragons comes upon a corpse, the biggest male eats first.

Like a snake, the Komodo dragon projects a breathing tube under its tongue to let it breathe while it eats. Then, it will regurgitate a gastric pellet of indigestible material such as horn and hair. Despite its prowess as a hunter, the Komodo dragon seems to prefer carrion. Unfortunately, the rumors about it digging up and eating human corpses appear to be true. 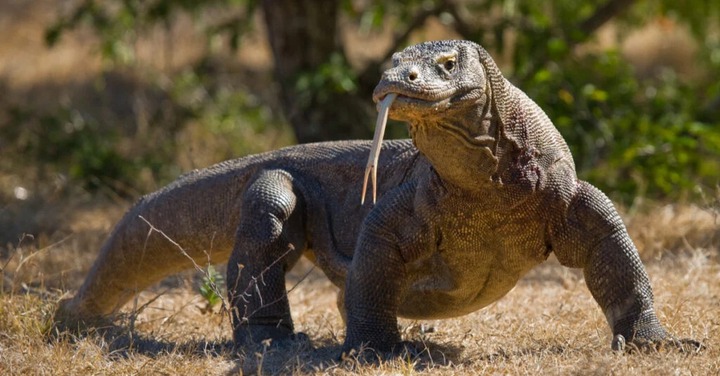 Once found only in South America, the armadillo has slowly moved north to Central America, the American southwest and north to Nebraska, and east to North Carolina. It is famous for its armor, which is made of bony plates covered with scutes. Some species of armadillo are flexible enough to roll up into a ball when they’re threatened, while the nine-banded armadillo jumps four feet into the air when it’s scared.

The armadillo’s reproductive strategy is also fascinating. Though only one egg is fertilized, it doesn’t implant in the uterus right away. When it does implant, it splits into quadruplets. This is normal and expected.

The armadillo is also one of the few animals that can contract leprosy and is a disease reservoir for the Trypanosoma cruzi parasite. This parasite causes the ghastly Chagas disease. 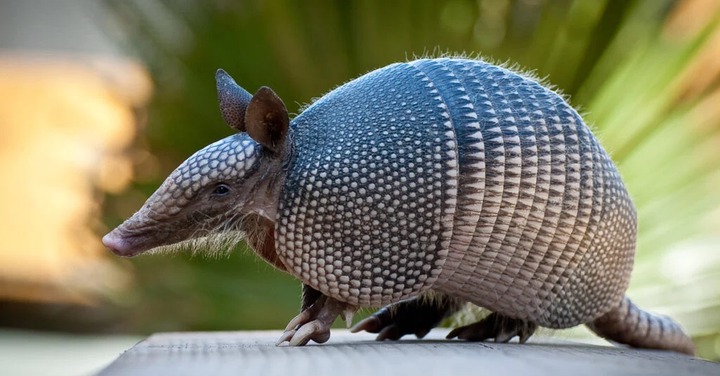 This South and Central American mammal whose very name is a word for one of the seven deadly sins likes nothing better than to hang upside down in its favorite tree. It eats, sleeps, mates, gives birth, and even dies hanging upside down in a tree. The only thing it doesn’t do in its tree is relieving itself. Then, it will climb ever-so-slowly down the tree, drag itself to the spot where it always does its business, then very slowly climb back up. Biologists do not know why the sloth leaves its tree to do this of all activities, for it makes it subject to predation.

Moreover, the sloth has a symbiotic relationship with algae, which grows in its fur and turns it green. A microcosm of arthropods, including moths, mites, and beetles also live in the animal’s fur. Sloths are also a bit cold-blooded, as their body temperature is dependent on their environment. The temperature of a normal, healthy sloth is between 77 to 95 degrees Fahrenheit. If the body temperature drops to as low as 68 degrees, the animal goes into torpor or a deeper torpor than it’s already in.

Sloths can’t walk. The arms of the three-toed sloth are 50 percent longer than its legs.

The long arms make it an excellent swimmer. The sloth can hold its breath for 40 minutes underwater.

Unlike most mammals, it doesn’t always have seven vertebrae in its neck. It can have more or less depending on the species. 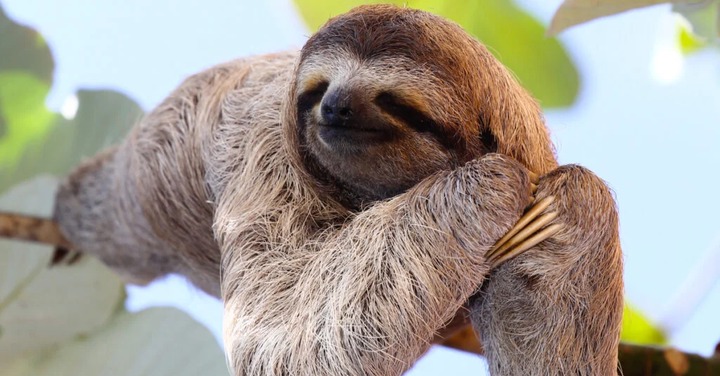 The sperm whale is one of the most fascinating marine mammals. Hunted nearly to extinction for the sperm oil in its head, this huge and intelligent animal is still vulnerable to extinction even as it’s found in most of the oceans of the world. It’s the largest toothed carnivore, has the largest brain, and makes the loudest sound on earth. It has a complex repertoire of vocalizations that help it communicate with other sperm whales and find prey. These vocalizations are learned, not innate. Since this whale dives deeper than any other marine mammal, it uses echolocation to hunt in the lightless depths of the ocean. The whale, also called the cachalot, can dive as deep as 6600 feet in search of one of its favorite meals, the giant squid.

Not only does the whale produce sperm oil, but it also makes ambergris in its gut. Ambergris is still used in perfume and is sometimes found washed up on beaches. Indeed, it is vomited up because it’s made when the indigestible beaks of squid irritate the whale’s digestive system and the whale secretes a lubricant to ease the irritation. Sperm whales also sleep vertically with their heads just beneath the surface of the water, and no one knows why. 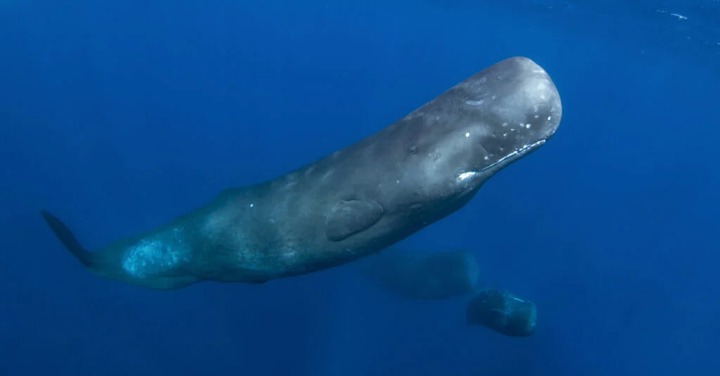 The hyrax or “dassie” looks like a cross between a rabbit and a guinea pig and looks like it should be either a lagomorph or a rodent. Found in east and southern Africa and the Middle East, it is neither. Its closest relatives are the elephant and, amazingly, the manatee. It even grows tusks that keep growing throughout its life, and its cheek teeth are like those of a rhinoceros. The nails on its feet are less like nails than hooves, and there’s a gland on its back that secretes pheromones. When the babies are born they climb on their mother’s back and lie on this gland, which helps them to imprint. 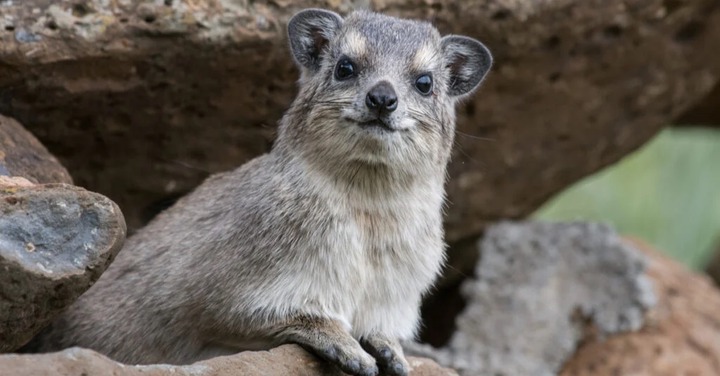 You Need A Kidney Cleanse. Here’s How To Flush Out Toxins From Your Kidneys

No More Varicose Veins, No Joint Pains and No Headaches Thanks to This Leaf